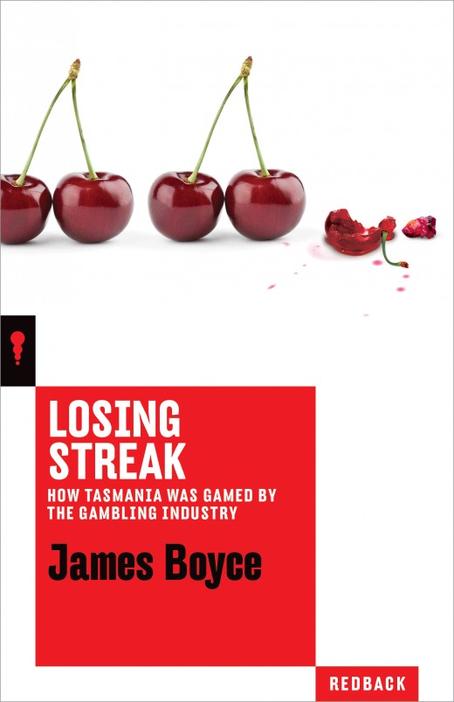 A jaw-dropping account of how one company came to own every poker machine in Tasmania and the cost to democracy, the public purse and problem gamblers and their families.

The story begins with the toppling of a Premier, and ends with David Walsh, the man behind MONA, taking an eccentric stand against pokie machines and the political status quo.

It is a story of broken politics and back-room deals. It shows how giving one company the licence to all the poker machines in the most disadvantaged state in the country has led to several hundred million dollars of profits (mainly from problem gamblers) being diverted from public use, through a series of questionable and poorly understood deals.

Losing Streak is a meticulous, compelling case study in governance failure, which has implications for pokies reform throughout Australia.

The subtitle of Losing Streak is; “How Tasmania was Gamed by the Gambling Industry”. As even a cursory read of this book will suggest, that subtitle understates the role which politicians played in the development of Tasmania’s gambling industry and, in particular, the spread of poker machines throughout that State.

The book, needless to say, begins with the development of the Wrest Point Casino. Those promoting the adoption by the Tasmanian Parliament of the Casino Bill painted glorious pictures of the Casino’s potential to attract tourists to Tasmania.

Not all members of the Parliament, however, were convinced. So, Kevin Lyons, who plays a central role in a later part of the story, observed “a call-girl racket, white slavery and drug pedalling could follow the Casino”.  Lyons, the son of Joseph and Dame Enid, has been snatched from the jaws of obscurity by the less than veiled suggestion in the book that he was bribed to step down from the deputy premiership  in a subsequent Tasmanian Government and, thereby, cause its downfall. This is a suggestion which was subsequently advanced earlier this year on the ABC but which is hotly contested by Gerard Henderson, who was a lecturer in politics in the University of Tasmania at the relevant time.

Be all of that as it may, it is a sideshow to the main thesis of the book, being the influence of Federal Hotels on Tasmanian politics. That influence, so the book argues, has reaped benefits for that company including tax relief, limitations on the development of a casino in Launceston, which would have made it an uneconomic proposition for any competitor of Federal Hotels, and, most significantly, the introduction to Tasmania of poker machines and its subsequent ability to monopolise that form of gambling.

In a transaction which Mr. Boyce describes as “the deal of the century”, Federal Hotels was granted the exclusive licence to operate poker machines in the pubs and clubs of Tasmania, ex gratia, with the tax on the new machines being lower than the rates suggested by the company in its own submission to the Parliament and far less than the Parliamentary Select Committee had recommended.

Of course, the story of gambling in Tasmania and, in particular, poker machines, has not yet run its course. In this context, the timing of the publication of Losing Streak was timely as the continued licensing of poker machines was the subject of much debate in the Tasmanian State election held earlier this year.

James Boyce is the author of Born Bad (2014), 1835 (2011) and Van Diemen's Land (2008). Van Diemen’s Land won the Tasmania Book Prize and the Colin Roderick Award and was shortlisted for the NSW, Victorian and Queensland Premiers’ Literary Awards, as well as the Prime Minister’s Award.