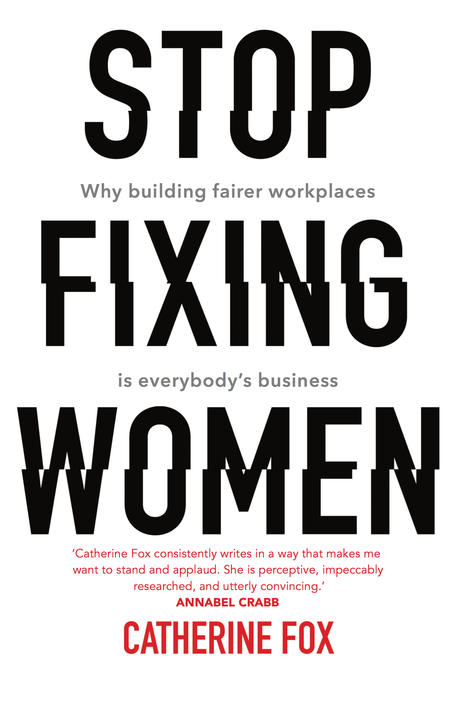 Millions of words have been spent in our quest to explain men's seemingly never-ending dominance in boardrooms, in parliaments, in the bureaucracy and in almost every workplace. So why is gender inequality still such a pressing issue?

Wage inequality between men and women seems one of the intractables of our age. Women are told they need to back themselves more, stop marginalising themselves, negotiate better, speak up, support each other, strike a balance between work and home. This searing book argues that insisting that women fix themselves won't fix the system, the system built by men.

Catherine Fox does more than identify and analyse the nature of the problem. Her book is an important tool for male leaders who say they want to make a difference. She throws down the gauntlet, showing how business, defence, public service and community leaders might do it, rather than just talk about it. She shows that not only will this be better for women but for productivity as well, not to mention men and women's health and happiness at home and at work.

As noted in the preface to the book, a previous book by Catherine Fox; Seven Myths about Women and Work (also published by New South) was shortlisted for this Prize some years ago.

The subtitle to Ms. Fox’s book is: “Why building fairer workplaces is everybody’s business”. A less prosaic and perhaps more compelling subtitle could easily have been; “It’s the workplace, stupid”.

This is another book which is timely. On the one part, the commentary about Catherine Brenner’s leadership of the AMP has been described by Elizabeth Proust, the Chairman of the Australian Institute of Company Directors, as “sexist”. On the other, Janet Albrechtsen, in an op-ed piece in The Australian at the end of April, queried the appropriateness of having quotas for female membership of boards of directors.

The compelling quality of Catherine Fox’s book is that she examines, in a quite dispassionate way, aspects of the workplace which militate against the advancement of women and their careers. She also explores the contributions which women can make to organisations which result in them being healthier and fitter for purpose.

The chapter headings identify many of the issues to which Catherine Fox has turned her attention. They include topics such as; “The Fight for Flexibility”, “Who gets the Job?”, “Earning Power”, and “Promotions not Panaceas”.

One anecdote from the chapter on flexible workplaces resonated with me. It concerned a presentation on research about flexibility in the workplace and a subsequent discussion about that research. One participant in that discussion was a man and, as Catherine Fox records; “the audience applauds his comments, which are a useful addition to the conversation. But the woman I am sitting with points out that none of the women, who already raised equally pertinent points about the struggle to break down narrow-thinking on flexibility were applauded”.

The other anecdote from the book which resonated concerned promotion of women in the ADF. Apparently it is described as being “Brodericked”. Until reading Ms. Fox’s book, I have always thought of Liz as a person rather than as a verb.

The final word on Catherine Fox’s book must go, though, to the recently appointed Chief of the Australian Defence Force, General Angus Campbell, who is recorded as saying; ”1,000 men in a valley in Afghanistan speak only to men – that’s mission failure wrapped up in structural failure”.

Catherine Fox is an award-winning journalist and author. She was the former Corporate Woman columnist at the Australian Financial Review.