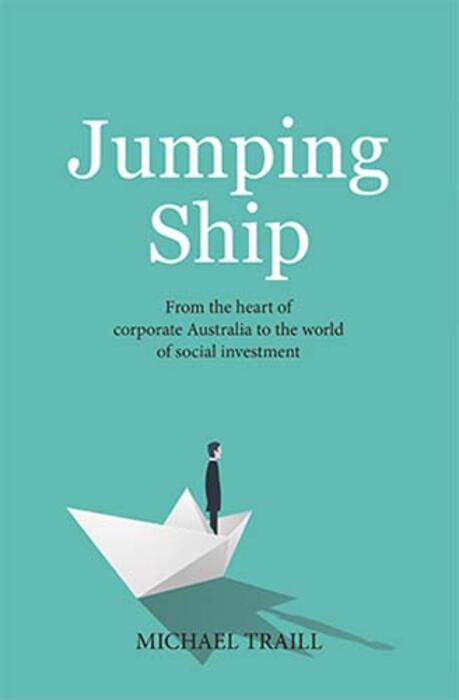 An ambitious, competitive kid from a country town, Michael Traill converted his education opportunities in the hallowed halls of Melbourne University's Trinity College and Harvard Business School into a highly paid and successful career at Macquarie Bank.  But at the peak of his career, in his early forties, he decided to leave that behind.  Reconnecting with the values of family and community that shaped his childhood, he founded a unique non-profit success story, and became a key architect of one of the biggest social enterprises in the world.  Jumping Ship is a manifesto, built on the best of thinking and practice from the business and social purpose worlds for Capitalism 2.0 at a time where traditional business values are under increasing scrutiny.

Michael Traill’s book is divided into three parts; the first is autobiographical, the second explores the establishment and early years of Social Ventures Australia, and the third focuses on the incorporation of GoodStart and its acquisition of some 670 of the learning centres previously operated by ABC.

As with the other two shortlisted books, Jumping Ship has a subtitle; “From the World of Corporate Australia to the Heart of Social Investment”. It is a subtitle which, however, does not do the autobiographical section justice. That section and its relevance to the other parts of the book is summarised by Hugh Mackay in his Foreword in this way. Michael Traill had “the formative influences of a loving family, modest circumstances, a state-school education, a strong sense of engagement with the local community in the mining town of Morwell and, later, an awareness of disadvantage and deprivation in the town [which] can all be easily discerned. As can the early love of sport, of action and of winning.” I would add the example as well as the influence of his parents.

Turning his attention to the story of Social Ventures Australia, the author describes its modest beginning; a desk in a corner of The Benevolent Society, Paddington. He then traces its evolution which started by the identification of mentors from the commercial world and prospective “mentees” who were “quality non-profit organisations” that were interested in, and could use, relevant business skills. The author records both some of the successes as well as some of the failures of SVA and introduces the reader to some great characters along the way. From that beginning, SVA went on to establish a consulting arm which could provide advice and support for the not-for-profit sector. Interestingly, it was only towards the end of Michael Traill’s journey with SVA that he started to explore the process of developing relationships with government and securing public sector support for not-for-profits.

The engagement with SVA would seem to have provided the author with a springboard from which he leapt or might have been pushed by a friend in the Victorian Parliament when he became involved with the establishment of GoodStart and its acquisition of a portfolio of ABC’s Learning Centres. Whilst, in its context, the author deprecates this description of the undertaking, it would seem to accurately describe both his motivation and those of the others he engaged in that venture:“Would you be interested in providing support to a unique opportunity to help a syndicate of well-credentialed non-profits to acquire the assets of ABC Childcare?”

In an age when companies are thinking more about their corporate social responsibility and what it might involve, as well as the fee which might be charged for their social licence to operate, Michael Traill’s book provides at least some of the pointers.

Michael Traill was a co-founder of Macquarie Bank’s original private equity business and founding CEO of Social Ventures Australia. He currently holds a range of for purpose and commercial Chair and Board roles including as Chair of Goodstart Early Learning.