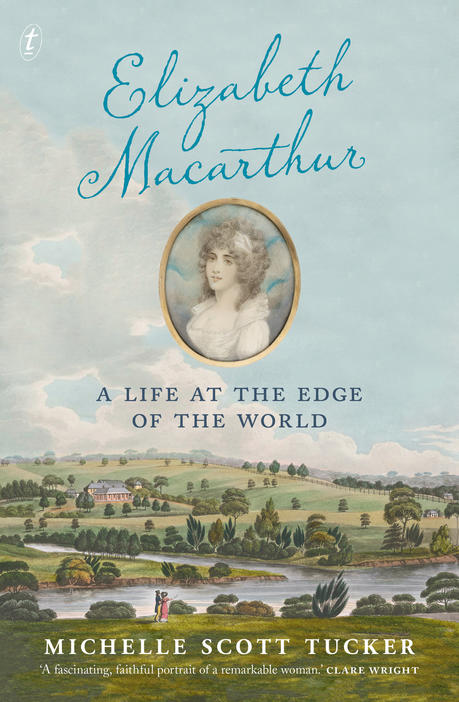 In 1788 a young gentlewoman raised in the vicarage of an English village married a handsome, haughty and penniless army officer. In any Austen novel that would be the end of the story, but for the real-life woman who became an Australian farming entrepreneur, it was just the beginning.

John Macarthur took credit for establishing the Australian wool industry and would feature on the two-dollar note, but it was practical Elizabeth who managed their holdings—while dealing with the results of John’s manias: duels, quarrels, court cases, a military coup, long absences overseas, grandiose construction projects and, finally, his descent into certified insanity.

Michelle Scott Tucker shines a light on an often-overlooked aspect of Australia’s history in this fascinating story of a remarkable woman.

The winner of this Prize a couple of years ago was Catherine Bishop’s “Minding Her Own Business”. Michelle Tucker’s account of Elizabeth Macarthur’s life could well have been subtitled; “Minding the Family’s Business”.

Elizabeth’s life is traced from its beginning as a girl growing up in Bridgerule, Devon to her death at Watson’s Bay in 1850 at the age of 83.
And what an extraordinary life.

She became engaged to and married John Macarthur in 1788. Whilst it was a propitious year, given its significance in the context of the history of Australia in the European era, the marriage of the Macarthurs was regarded as ill-advised. It was also, undoubtedly, tumultuous on account of John’s irascibility and, ultimately, his dementia.

Equally, though, as the author explores, it was a married life filled with much pleasure as well as the usual trials and tribulations.

Following their marriage and John securing a commission in the New South Wales Corps, they left England, a country to which Elizabeth never returned, in 1789, and began their journey to Australia. As the author observes, it was during its seaward leg that “the young couple was beginning to operate as a partnership”.

It is that quality of the relationship between Elizabeth and John which underscores and informs so much of their lives together. Although it was not sufficiently strong for John to defy the convention of the day and leave his estate to his wife.  His sons were his beneficiaries.

What is compelling, though, is not so much the story of their partnership but to appreciate Elizabeth’s contribution to the family business when John was in exile, as it were, from the Colony, first for six years and subsequently for a period of nine years.

First there is the scale of that business. Its dimensions can be appreciated from  the following passage in the book: “The [1828] Census records the Macarthurs as owning, in total, about 43,000 acres. Theirs was the largest single holding in New South Wales, except for that of the Australian Agricultural Company. The Macarthurs held grazing land at Camden and Argyle, Elizabeth Farm, a town allotment in Parramatta and several in Sydney and the Pyrmont Estate consisting of 22 hectares of unimproved land on Darling Harbour. Their livestock included nearly 14,000 sheep, 172 horses and some 200 cattle.”

Even by the standards of today, that was a mammoth undertaking. Second, and beyond that, whilst it was John who identified the potential for Merino Sheep in New South Wales, it was Elizabeth who demonstrated particular skills when it came to animal husbandry. It would seem that she maintained what, in today’s terms, would be called a ‘stud book’. It was by reference to that and her knowledge of sheep that she was able to manage the Macarthur flock to ensure that it was producing the finest of fleece.  It is undoubtedly these considerations which enables Elizabeth to be ranked as almost certainly preeminent among Australia’s early businesswomen.

Michelle Scott Tucker is the Executive Director of The Stella Prize, Australia’s pre-eminent literary prize for women writers. Prior to joining Stella, she had a successful career in business and government. Michelle is a graduate of the Australian Institute of Company Directors and has completed a Master of Business Administration and a Bachelor of Arts (English and History). Passionate about Australian women’s history, literature and storytelling, Michelle is also the former Vice Chair of the Board of Writers Victoria. Michelle lives with her family and too many pets in the Macedon Ranges, northwest of Melbourne.