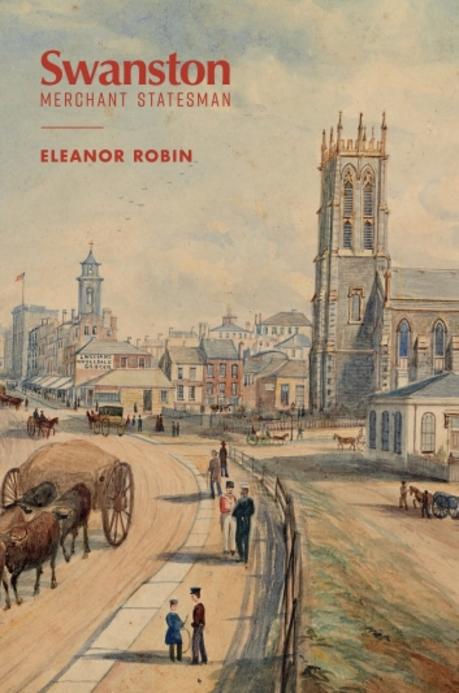 In reviving Swanstons remarkable story from a dusty, almost forgotten treasure trove of bank archives, Eleanor Robin brings to light his considerable contribution to the economic, political and social life of Van Diemens Land and his leading role in the settlement of Melbourne.

As Eleanor Robin explains rather late in the text in this biography of Charles Swanston (Ch.15), Swanston has not been treated kindly by Tasmanian historians. In 1948 W.H. Hudspeth regaled an after-dinner audience with an entertaining sketch of Swanston’s rise and fall that became the accepted view for the next seventy years.  Other historians, like Kathleen Fitzpatrick relied on the evidence of contemporary detractors and the discomfort of colonial settlers over Swanston’s ignominious end to depict him in a negative light. This book, which conceptualizes Charles Swanston as a ‘merchant statesman’, places him within a wider imperial mindset, and assesses his intellectual and social capital against the financial business mores of the time.  Drawing on the archives of the Derwent Bank papers, which were only fully catalogued in 2017, Robin concludes that Charles Swanston was “a vital cog in the rapidly turning wheel of change. He was a man of the world who played out his life boldly in exotic and far-flung regions of the 19th century British Empire” (p.198).

Charles Swanston was born in Northumberland and served with distinction in the Madras Army of the East India Company.

Following an exploratory visit to Van Diemen’s Land in 1829,. he returned to the Colony in 1831 to take up permanent residence.

It was during his exploratory visit that he met, amongst others, Lieutenant Governor Arthur and made the fortuitous acquaintance of one William Hamiliton. Fortuitous because, when Hamilton decided to return to England in 1832, Swanston succeeded him both as Managing Director of the Derwent Bank and as a member of Tasmania’s Legislative Council.

By the standards of today, the range of Swanston’s commercial activities is breathtaking. He was involved in finance, agriculture, in a number of its aspects, and land development. It was this latter engagement which saw him as a central participant in the establishment and activities of the Port Phillip Association. That Association sought to secure extensive landholdings in Victoria, following Batman’s so-called “treaty”, with the Aboriginal community around what is now Melbourne. That venture ultimately proved to be forlorn with Governor Burke declaring the syndicate’s claims to land to be void.

Yet, ironically, it was Burke who gave Swanston Street its name, in recognition of Swanston’s contribution to the development of Port Phillip.

Additionally to Swanston’s commercial activities, he was extraordinarily active in the political and social life of the colony.

His contribution to the Legislative Council, particularly by reason of his commercial acumen, was highly regarded. He was also engaged in a wide range of what might be called ‘good works’.  These included’ “being one of the first wardens of St John’s Church, New Town, Guardian of the Orphan’s School, a member of the Board of Education and the Merchant’s Institute and Vice-President and Treasurer of the Royal Society from its inception to his departure from the colony.”

It is this circumstance which is the centrepiece of the divergent views about Swanston. A number of commentators are highly critical of him. Eleanor Robin’s view is more benign.

Whatever the true position may be, Swanston’s debt to the Derwent Bank represented some 70% to 80% of its capital. It is to be expected, therefore, that there was a number of witnesses who appeared before the Hayne Royal Commission who would have felt much more comfortable if Swanston had also been required to share the limelight with them at that inquiry.

That, however, could not have been, and Swanston left Van Diemen’s Land in 1850, whence he travelled to California via Melbourne to meet his son in the goldfields. It was most probably Swanston’s only visit to a city in which he is still remembered.

Eleanor (Den) Robin OAM is an historian, journalist and writer. Following a cadetship with The Canberra Times she reported from the Federal Parliamentary Bureau of The Sun News-Pictorial and later free-lanced. In the Commonwealth public service she worked in Aboriginal Affairs and environment departments and managed the information program of the Australian Heritage Commission, enhancing her passion for Australian history and heritage conservation. During eight years in Tasmania, Eleanor became fascinated by stories of the wild optimism and naked ambition characterising Australia’s early capitalists and earned a doctorate from the University of Tasmania. She lives at Narooma, NSW.