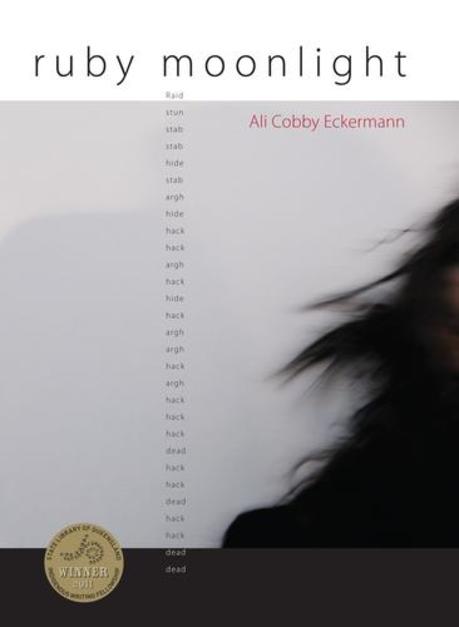 Ruby Moonlight is a verse sequence imagining a specific incident in mid-north South Australia, in the late nineteenth century. Through a series of interconnected poems we follow the story of a young girl, Ruby, who survives the massacre of her entire family; wandering through Ngadjuri land, ‘she staggers to follow bird song’ and trusts in nature to guide her to safety. Through a minimal style, absence of punctuation and deeply emotional yet understated and refined storytelling, Ruby Moonlight recounts an unforgettable series of experiences and illuminates parts of the Australian natural world that are often forgotten, ignored or altered. It is the kind of powerful narrative that has often been silenced.

Cobby-Eckermann writes the history of Ruby but also of Indigenous people who were victims of massacres around Australia during colonisation. The writing conjures up violence and loneliness, isolation and death, but within this darkness is a healing brightness that resides both in the descriptive power of the language and in Ruby's journey. The writing is not didactic or angry but generates discussion; it offers the reader a chance to understand more about this country’s past and its impact on our present.

In Ruby Moonlight, Ali Cobby-Eckermann has written a series of interconnected poems, a verse novel really, that describes first contact from an Indigenous point of view. It is personal, historic and profoundly human. These innovative poems take up traditional narrative voices, bringing past conflicts vividly to life with short and agile lines that are lucid, refined and luminous. Colonialism and survival are set against the natural world, love and the desire for human engagement. The writing is delicate yet strong, the tone is pitched so well the reader is not distracted by the agile technique that carries the narrative forward. Ali Cobby Eckerman has created a new language that holds the reader's attention from beginning to end, this reflective narrative is an outstanding achievement that will, with its skill and elegance, deeply enrich Australian poetry and whoever reads it.