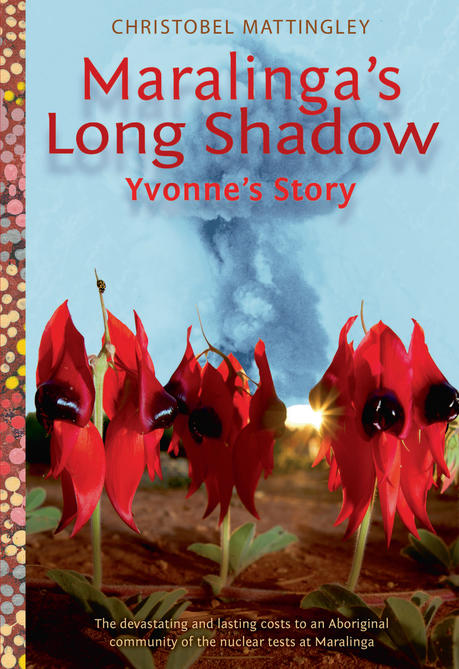 On 24 June 1952, the Aṉangu people were forcibly dislocated from the Ooldea Lutheran mission on their traditional land in South Australia and sent to Yalata, another mission station in the country of another Aboriginal people. The traditional Aṉangu country was renamed ‘Maralinga’ and handed over to British scientists to carry out nuclear tests which would contaminate the land for the next 24,000 years.

Maralinga’s Long Shadow tells the story of Aṉangu woman Yvonne (also known as Tjintjiwara), who experienced this dislocation. Her husband and two sons died of cancer when they were granted ‘salvage rights’ and sent to clean up Maralinga many years later. This well-researched and original history interweaves the account of nuclear testing at Maralinga with Yvonne’s biography, community service and career as an artist. It tracks her experience of life on mission stations, her grief at being tricked into allowing her baby to be removed from her care, her marriage and family life, her reunion with her adult son, and how the introduction of alcohol began to destroy the Yalata community.

Christobel Mattingley does an outstanding job handling the many strands of this complex narrative, telling the tale in a simple but powerful and accessible voice. The book is beautifully illustrated with photos from Yvonne’s life and vivid reproductions of her artwork. Despite the tragic history it recounts, Maralinga’s Long Shadow is suffused with hope because of Yvonne’s resilience and her determination to serve her community both in practical ways, and by passing on Aṉangu stories, traditions, and her art. This is an important, moving and inspiring story.