When the Colarts Studios First World War photographs came to the Library in the 1960s, having toured the country 40 years earlier, they were in poor condition. Their surfaces were covered in grime and blemished by drip marks and other stains. Some were glued to acidic cardboard mounts which had warped. Many of the larger works were torn. After being catalogued and stored, the 151 prints have remained mostly undisturbed until now. The new exhibition was an opportunity to restore these beautiful photographs and look at their long-term housing. The condition of the prints meant that an extensive ongoing treatment process was required.

As the exhibitions conservator, I met with the curator and designer to examine each print. We were intrigued by the method used to apply the colour. Although we initially thought that the images were hand-painted, on closer inspection with a magnifier it appeared that an airbrush technique had been used as the main source of colour across the images.

We know from advertisements that a trademarked instrument called the Aerograph — developed in the US before the war — was available in Melbourne in the 1920s. The subtle colouring of the prints shows that the returned soliders working at Colarts Studios became skilled at this technique. They also used paintbrushes to accentuate small details such as hats, belts, windows and leaves. Several prints still have window mounts — a piece of cardboard painted black — from the 1920s.

We had to remove these mounts to avoid further damage to the photographs. In keeping with the original exhibition, however, we are remounting the prints with black archival board, which will provide ongoing protection. The Colarts Studios photographs have undergone many weeks of treatment by the Library’s conservation team. With Foundation’s support, this much-needed work will continue after the exhibition, giving the important collection a new and prolonged life. 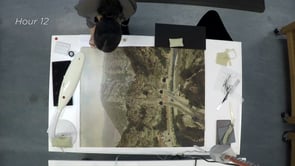 A timelapse of the 19+ hours Conservator, Wendy Richards spent restoring just one of the hand-coloured photographs on display in "Colour In Darkness"

An audio described version of this video is available.

Hand-coloured photographs by 'digger artists' exhibited for the first time in 90 years.

The story behind solider photography during the First World War and the impact of colouring these already powerful images.