Coffee is probably the world’s most popular drink (after water) and Sydney’s coffee consumers now drink over 1 million cups a day. In Melbourne, coffee lovers with expensive tastes are paying up to $12 a cup for the latest trendy brew.

In the nineteenth century however, refreshment on the goldfields could only be described as basic. The coffee houses of Hill End and Gulgong bore no resemblance to today’s fashionable establishments, where exotic blends and pretentious baristas are de rigueur.

The Victoria Pie and Coffee Rooms in Hill End probably set the standard and Mrs Green (above) perfunctorily dispensed her brew into ironstone crockery from a large urn. 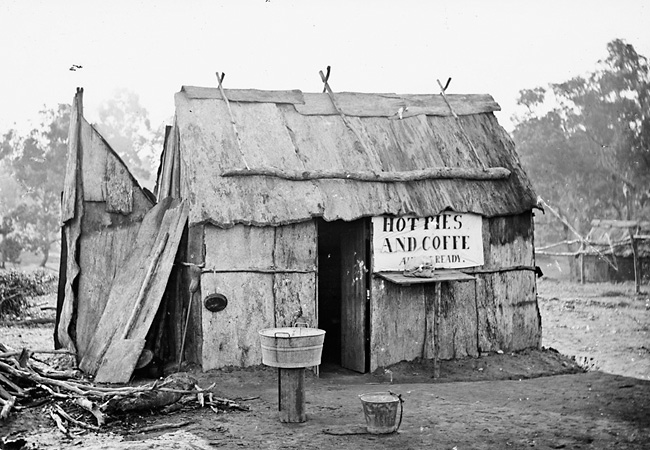 The second caffeine establishment pictured above was taken at either Home Rule or Gulgong. Despite the owner’s spelling, coffee could be purchased at all hours, although the rudimentary construction of the building must have raised concerns about the quality of the pick-me-up. The possibility that this is in Gulgong brings to mind an interesting story from the Gulgong Guardian, as reported a fortnight later in the Brisbane Courier 31 December 1872. If this is the same or a similar establishment, then the reason for our heroine’s actions is obvious.

IN these dull times (says "Photo" in the Gulgong Guardian) no doubt many men and their wives find it difficult to make both ends meet. Man's cunning, aided with woman's wile, often devises a plan to make a rise that is startling for its novelty and amusing in its results. A case in point is now town-talk. It appears that an enterprising resident had tried many ways to keep the pot boiling,- from shepherding on the Star to teaching in school, even running a coffee shop, where hot pies and a parch could be had at all hours of the night. In the last effort to live he failed, as his landlord seized his coffee can and fixtures for rent, and sold them off. Being determined to make tracks for a fresh opening for his hitherto unsuccessful abilities, a happy thought struck him. Yes, struck him, and forcibly too. He would sell his wife for what she would fetch, and with the purchase money be able to clear out comfortably. The lower end of Herbert street is now almost wholly occupied by Chinese, who deal in almost everything. One of these Celestials soon became an intimate acquaintence with the vendor of coffee, and openly expressed his admiration for Mrs Coffee Shop, and, as is not uncommon with the heathen Chinee, he asked “you seller me your wife?" It was then the happy thought came, and after a protracted negotiation, a sale was effected for £20 of good and lawful British money. A sale-note was written out, and duly signed and stamped, and one half the money paid down, the remaining half to be paid the vendor when on the coach for Mudgee. His wife was told that the Celestial vendor of fruit and green grocery was to be her future lord and master. She appeared rather glad than sorry at her change of owners, and did not resent John's clumsy attempts at showing his devotion. Everything being arranged for a departure, the seller and purchaser walked up Herbert street to meet the coach, leaving the sold one in charge of John's shop. The seller, having got into the coach, he received the remainder of the purchase money; the coach started, and John, with hurried pace, hastened back to his little shop to enjoy the company of his "luapean wife" Alas! for the frailty of woman and the vanity of human hopes, the Celestial entered his shop, searched all the premises, but no wife was to be found. A caucus of his countrymen was held, but resulted in nothing practical being done, except that search and enquiries failed to find the bought one, and when night fell, Johnny felt he was a sold one, and quietly submitted to his fate. My readers, no doubt, guess the end. No sooner had John left his purchase in charge, while he went to see her late lord safely off, than she took her departure, taking with her a package of John's green tea, and meeting the coach a mile out of town, rejoined the partner of her bosom, and no doubt enjoyed with him the success that had attended their novel method of making a rise.