Even in the nineteenth century, photographic studios regularly copied photographs and artworks for their clients. In fact, about five percent of nineteenth century photographic portraits are much older than their presentation, a phenomenon that can confuse family historians. It is clear from their negatives that the American and Australasian Photographic Company studio copied older cartes, ambrotypes and even daguerreotypes from other photographers. 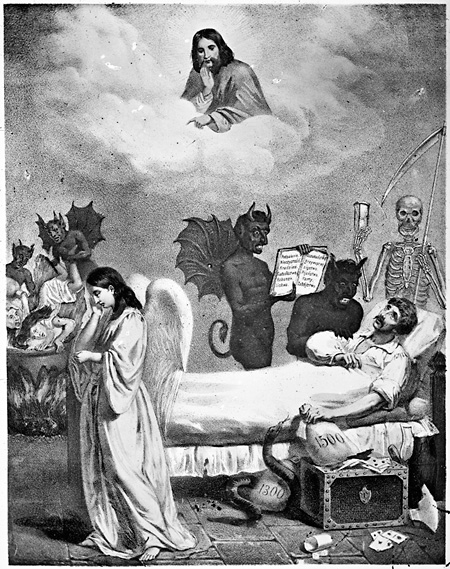 One of the recently scanned A&A images (a2824472 - formerly Box 30 frame 39) was a copy negative of a framed lithograph titled (in English) The death of the sinner and again underneath (in German) Der Tod des Gottlosen. Published in Berlin by F. Sala &Co, it appeared to be a standard religious pictorial catechism, demonstrating the wages of sin. It depicted the devil showing a list of sins to a dying man, while demons and the grim reaper stand by his bed and Christ and an angel look away.

Or so it seemed, until the list of sins was enlarged and it was realised the words were Polish. With the help of staff colleagues, Ela Chylewski, Ania Szafjanska and Agata Rostek-Robak, the words were translated. 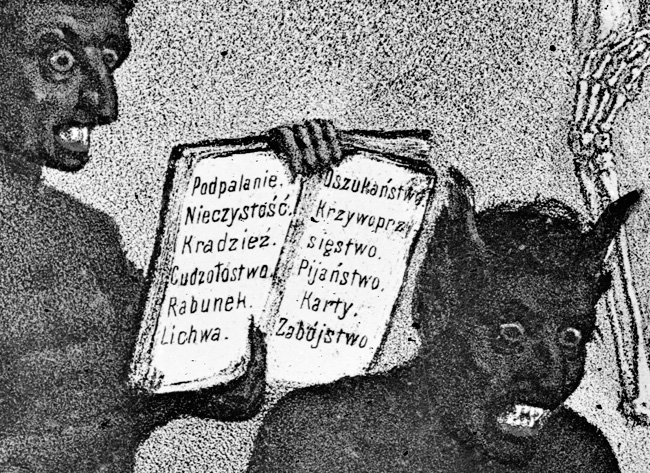 Obviously these were not the religious and moral imperatives of the Ten Commandments, nor were they the Seven Deadly Sins. ‘Incendiarism’ and ‘Dirtiness’ were something else altogether. That they were in Polish indicates the nationality of the dying man.

Closer examination of the image reveals that the man on the bed has a drooping moustache (a symbol of Polish patriotism), so that the list of his ‘sins’ was instead the perceived ‘crimes’ and ‘traits’ of Polish nationalists. Suddenly, it became clear that this lithograph was not religious instruction, but an anti-Polish political cartoon using a well-known religious theme.

Without going into the lengthy history of Polish persecution, it is enough to know that Poland lost its independence in a series of partitions (1772, 1793 and 1795), undertaken by Russia, Prussia and Austria and remained partitioned for 123 years. Ethnic Poles were discriminated against at all levels by both Russian and Prussian governments. In Prussia, and later in Germany, Poles were forbidden to build homes, and their properties were seized by the government. Otto von Bismarck (Prime Minister of Prussia 1862-90) described Poles as wolves that "one shoots if one can".

A Polish uprising in 1863 was crushed in 18 months by Russia with the death of 25,000 insurgents. Reprisals were harsh. About 70,000 were imprisoned and removed to Siberia. Monasteries and churches were abolished and the Polish language banned.

The only thing certain about The death of the sinner is that it was photographed at Hill End NSW in 1872. It was probably brought to Australia in the 1860s by a miner from Prussia, as it was published in Berlin. The list of ‘crimes’ may be connected to the guerrilla warfare undertaken during the 1863 uprising, as the tenor of the cartoon is ‘This is what Polish nationalists deserve.’

It’s interesting that the historical enmity between Prussians and Poles exhibited in The death of the sinner wasn’t to be seen in the relationship between Holtermann and Beyers. They met in Sydney in 1859 and forged a long partnership on the goldfields. In fact, on 22nd February 1868, they married the sisters Harriett and Mary Emmett.