The State Library has a substantial strength in Cervantes consisting of over 1,300 editions of Don Quixote donated by Ben Haneman, and over 300 editions in the general collections. To this strength can now be added a first edition beautiful copy of this celebrated classic with nearly 400 woodcuts designed by Gustav Doré.

Paul Gustav Doré was a highly successful French artist, engraver and illustrator. His illustration of the French edition of Don Quixote remains among his best work for in it he matched himself against the Spanish artists of the great Ibarra edition (Madrid, 1780).  The results are simply superb.

The influence of his quasi-archetypal depictions of the knight and his squire has had a lasting impression on subsequent readers, artists, and stage and film directors in that their portrayal of the physical "look" of the two characters is almost always based upon the Doré images. 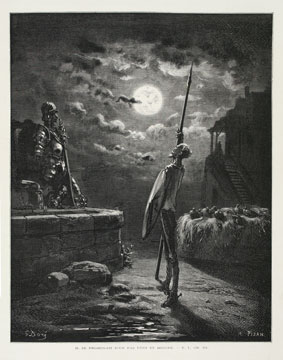 The 2 volumes include a provocative combination of large full-page plates and oversized vignettes and are enclosed in a fantastic full red-morocco-grain leather binding. This near-mint condition acquisition is part of the State Library Rare Books collection and can be found at RB/F0455. 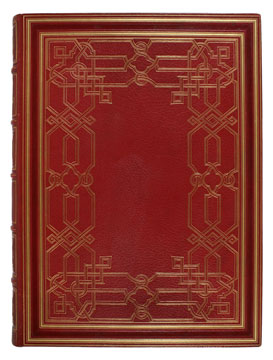