The Library recently acquired a fantastically rich archive from Lindsay’s Leichhardt, an Australian toy manufacturer. Lindsay’s was founded by Albert Leslie Lindsay in the 1930s. The company is still manufacturing toys today, albeit in a reduced capacity.

The story began in Sydney’s inner west, with AL Lindsay & Co making and selling White Cloud shoe cleaner and feather dusters made from turkey feathers. Lindsay used the leftover turkey feathers to make ‘American Indian’ headdresses, and by 1936 the firm was producing children’s ‘Cowboy and Indian’ outfits and a range of printed calico tents. During the Second World War all non-essential industries were put on hold, Lindsay’s were closed for five months but were successful in their appeal for a special dispensation to continue business. Albert Lindsay was given a permit to reopen provided he only employed people not covered by manpower regulations (i.e. widows, people over the age of 65 or disabled workers). Albert’s philosophy was that he was doing war service by providing toys for the children of men and women who were fighting.

During the 1940s the Lindsay’s began using Buffalo Bill as their registered trademark, tapping into the boom in television westerns such as Annie Oakley, Rawhide and Bonanza. Many of the western costumes were manufactured under licence from the large motion picture companies including Walt Disney and Warner Brothers in the United States. The Lindsay’s pioneered these licensing agreements in Australia and the introduction of television in Australia in 1956 opened the way for Lindsay’s to make the most of the influx of American television programmes.  These licensing agreements form part of the archive.

Lindsay costumes enabled children to become their favourite superhero or character from ‘Spiderman’ to ‘Mickey Mouse’, and ‘Zorro’ to ‘The Flying Nun’. Children could be Roy Rogers, Smokey Dawson or Elly May from The Beverley Hillbillies.

When the State Library was acquiring the collection, Albert Lindsay’s grandson Andrew Lindsay advised that his mother Hilarie (Albert Lindsay’s daughter-in-law) was very passionate about ensuring that there were as many costumes produced for girls as there were for boys, and Hilarie routinely devised outfits accordingly. This is a notable aspect of the Lindsay’s catalogue throughout the 1950s to the 1980s. It was a company ahead of the times in demonstrating gender equality.

The collection is significant both historically and socially. It tells the story of a thriving family-run local business that persisted during the decline of the Australian manufacturing industry, in the wake of cheaper imports and the lowering of import duties. The collection also chronicles changes in pop culture throughout Australia, and highlights the introduction of television, particularly the influence of international television programs and characters — such as The Samurai, Bonanza, Buffalo Bill, Annie Oakley and Batman — on children’s imaginative play.

While clothing and products related to the Wild West were a staple, Lindsay’s also produced a range of other exotic costumes, including a Ninja costume based on characters from The Samurai, various superheroes, Hawaiian outfits, nurse uniforms, tram conductor outfits and a Space Invader costume. Some of the Lindsay’s costumes were based on Australian characters such as Ned Kelly, but it was difficult for these to win a following given the domination of American popular culture in Australia during the 1950s and 1960s. Later, costumes related to local television shows such as Skippy, Romper Room and Humphrey B Bear achieved some popularity. 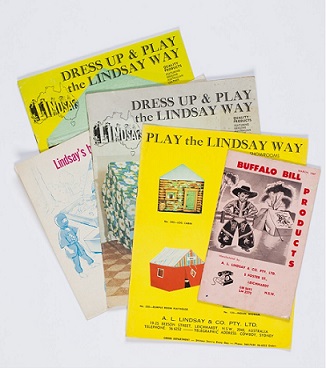 In detailing the operations of a locally-owned business, the Lindsay’s Toy Factory Records is a wonderful collection, documenting the social and business history of an Australian toy manufacturer. It is a significant acquisition for the Library, and a treasure trove for generations of Australians.