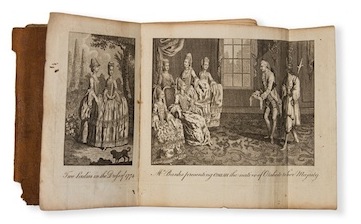 Omai, a native of Tahiti, was brought to England on the return of Cook’s second voyage in 1774 and was the first South Sea Islander to visit England. There are 2 known engravings of Omai being presented to the English aristocracy but the one pictured above is of special significance (acknowledgements to Douglas Stewart Fine Books from where the book was purchased for use of this image).

This engraving is captioned Mr. Banks presenting Omiah the native of Otaheite to her Majesty and depicts Joseph Banks presenting Omai to Queen Charlotte. It is the frontispiece of the little known Ladies most elegant and convenient pocket book, for the year 1775. Although engravings of Omai are known elsewhere until now the origins of this engraving had remained a mystery.

The small, non-descript pocket book itself is an ephemeral publication, probably from 1775, with the only other recorded example from the 1770s being the 1777 edition held in the British Library.

Finding the engraving as the frontispiece of this little publication elevates the status of the pocket book to the level of primary source material for understanding the interaction between Europeans and indigenous peoples of the Pacific during the eighteenth century.