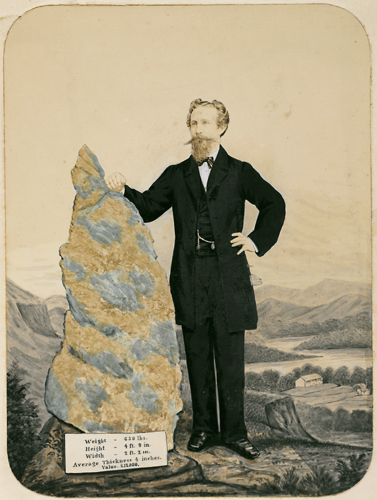 Edward Hammond Hargraves didn’t find the first payable gold in Australia, but it’s difficult to erase that fallacy, as he actively promoted his claim until it became ‘fact’ and he collected the Government reward of £10,000 and a pension. Actually, he was in Sydney when John Lister and the Tom brothers found payable gold near Ophir, NSW.

It’s also difficult to refute Bernhardt Otto Holtermann’s claim to have discovered the world’s largest specimen of reef gold on 19 October 1872, because it has always been called the Holtermann Nugget. As mine manager of the Star of Hope mine and a major shareholder, Holtermann made sure his name was associated with it from the day it was discovered. In reality, he was asleep at home when the night shift cut the famous vein of gold. The Star of Hope had first yielded serious quantities of gold in September 1871, when miner Mark Hammond went against the wishes of Holtermann and some other syndicate members and drove a tunnel to the west of the main shaft.

An account of the earlier discovery is detailed in Mark Hammond’s memoirs, titled The Recollections and Experiences of An Australian Gold Miner, held in the Library at MLMSS 117 ADD-ON 2229/1/2. This remarkable document was published 1988 by Brian Hodge as Remembered with Pride –The Recollections of An Australian Gold-digger. A unique first hand account of mining at Hill End, it is instructive of the difficulties of reef mining, the high emotions generated by men desperate to succeed and the lack of scruples accompanying gold-fever.

Hammond was no novice. He had begun panning for alluvial gold in Braidwood at age nine and followed his father to the alluvial fields at Turon in the mid 1850s, Lambing Flat in 1861 and Forbes in 1862. He began quartz mining at Turondale 1866-67 and Hill End in 1868, where he worked for wages for ‘Northumberland Jimmy’ Brown, whose claim was just north of the Star of Hope mine. He built a house in Tambaroora Street and married Mary Fitzpatrick in 1869. 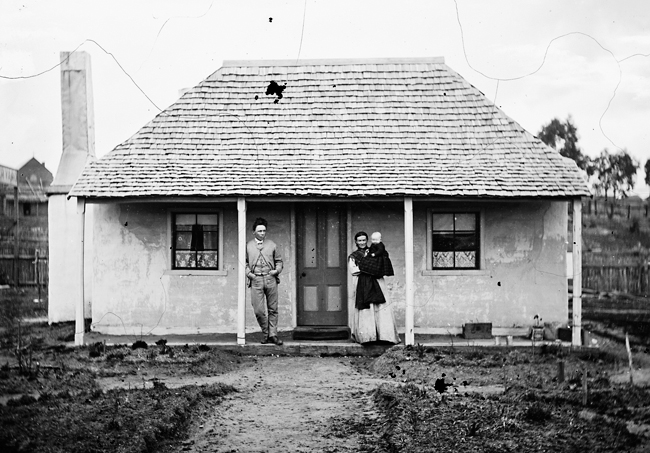 Mark Hammond with his wife Mary outside their four room cottage in Tambaroora St., Hill End, 1872

The story of the discovery began when Hammond purchased half of Dick Kerr’s quarter share in the Star of Hope mine, paying $500 for the 1/8th share and commenced digging one week later.

The following quote is from pages 131-135 of the photocopied typescript document.

“The following Monday morning found me ready to commence work at Beyers & Holterman’s.[sic] They had been engaged in sinking a perpendicular shaft which was then about 150 feet in depth having already passed through several non gold-carrying veins. Their intention was to sink on until they cut the vein that had carried the gold in Hurley & Moore’s [1] up to within a few feet of their boundary, where it left off. Their explanation of this was that the gold had dipped and as their shaft would cut it much deeper they were sure to get it by sinking on to that vein which meant another 25 feet through hard rock with water to contend with.

The haulage of rock and water over a depth of 150 feet by the aid of a windlass is no trifling undertaking, especially as in this case I knew the result would be nil.

I tried in every way to show them the gold had not dipped but that it had run out of that vein into another further west, where it would be found again, and that if we instead of sinking deeper, would go up the shaft and put in a cross cut 15 or 20 feet west ward, we would get the gold all this was futile. I pointed out that my prediction could be proved right or wrong in 8 or 10 days, whereas theirs would take many weeks, and I craved to have mine tested first — all to no purpose. Everyone was against me.

I had to consent to sinking this wretched shaft, which nearly cost me my life, as will be explained later on, against my will, but I stipulated that if the vein when cut had no gold in it, then I should be allowed to put a tunnel in up the shaft in the direction indicated.

After six weeks’ sinking night and day with three shifts the vein was cut without even the trace of gold in it. I now thought the field clear for my drive to the West, but no. Holterman [sic] and the others were determined now to follow this barren vein on the underlay, still claiming they were not deep enough.

You can imagine my feelings. The majority was against me. I consulted with Mr. Bell [2]. He said: “I have instructed my man to do whatever you direct him to do and not to mind the others”.

As it happened, his representative, Bill Hunt, and I had been working together for the past week or two. As soon as it came to our turn for the day shift, I took the Bull by the Horns. I cut props, put them across the shaft to carry the stage then framed up the shaft and took out the side slabs high enough to allow three feet or more of rock to fall on to the stage. This done, we put in several shots and worked out all the rock we could, leaving the whole of it on the staging. What we did that day could not be undone by half a dozen shifts, besides, the water in the shaft 50 feet below had been accumulating.

When the next shift came on to relieve us, I informed them what I had done. The looks on their faces are still in my memory, never to be forgotten. What they were going to do and what they would not do, was something awful. I had ruined the shaft and would have to pay dearly for it!

We got to very high words. I threatened to wring one of their necks, and was in return threatened with a knife. They knew that I had them in a fix, and that whether they worked or not, the drive would go in. The only way they could stop it was by applying for an injunction to restrain me.

We were on the night shift the following week when I had the extreme satisfaction of cutting a vein full of gold. This was 11 o’clock at night. We knocked off and reported the find to the party. The report of the discovery flew like wildfire. One would have thought these men would have been ashamed of themselves for the way they had acted, but instead of that, one of them rushed to the newspapers, leaving it to be inferred that he was the discoverer, and kept his name emblazoned before the public for years afterwards. I had nothing to gain by disputing the matter. I had found the gold and was well satisfied with that fact.

The first crushing we had gave 1400 ozs. of gold from 28 tons of stone, and this return was made after all the obstruction within three months, the time I had previously mentioned to Bell. That crushing enabled me to pay Mr. Bell his £500 and left something to the good. He at once transferred the show into my name and when I mentioned about paying him interest on the loan he scouted the thought of it.

After the next crushing, which yielded 1700 ozs. of retorted gold, I had an offer for my one-eight share, of £6,500 cash. The claim only measured on the run of the reef 120 feet. The offer I had, represented £51,000 for the whole clear of all working expenses, and I knew from past experience in mining that there was no certainty. I weighed the matter over seriously and thought of the hardships I had gone through, and concluded that a certainty was better than a risk. I accepted the offer.

The claim was afterwards floated into a company of 71,000 £ shares which was mainly taken up by the party [3]. These shares on the market went up to £3/10/- each, equal to £213,000 for the mine, or over £27,500 for what I had sold for £6,500, besides the amount paid away in dividends amounting to something like £100,000 in all. After that I speculated in the scrip of various companies in Hawkins Hill and made a good deal of money, but did not make my position as good as it would have been had I retained my interest in Holterman’s.”[sic]

Having made a small fortune, Mark Hammond left Hill End for Sydney in June 1873. He was elected Member for Canterbury in 1884 and died in 1908.

[1] Hurley and Moore’s claim was adjacent to Star of Hope on the northern side.