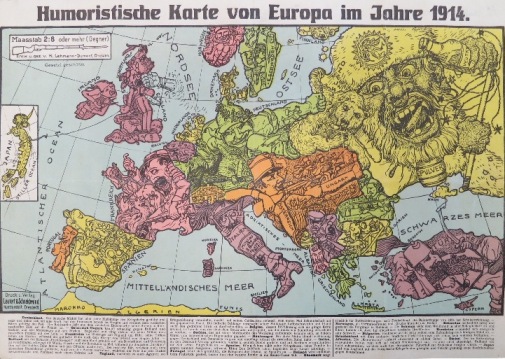 This newly acquired map is the work of Karl Lehmann–Dumont from Dresden.  It caricatures each of the European countries that participated in World War 1 from a German perspective. Germany is seen as the defender, striding ahead, pushing France aside and thumping Russia who is just about to swallow a bomb.  Germany’s ally, the Austro-Hungarian Empire, has let loose the Eagle on Serbia and Turkey is resting from the recent Balkan War with pipe in hand but ready to light Russia’s powder keg.

Britain is given an aquatic thump by an armoured German fist whilst a zeppelin approaches.  Japan, tied to England, draws a sword whilst Ireland tries to cut its chains from the rather distracted England.

This example, probably from late 1914, is one of a number of satirical maps that were created on both sides of the Great War.  As the war progressed, humour was replaced by more sombre propaganda and the national characteristics of enemies were portrayed in a more sinister light.

This map complements the Library’s extensive archive of World War 1 maps and posters. Humoristische Karte von Europa im Jahre 1914 can be found in the Mitchell Library map collection at: M2 200/1914/7.