The Library recently acquired a fabulous guide to the Fish River Caves, titled ‘Guide to, and description of the Binda or Fish River Caves by George Rawson’, written around 1882. At the time this account was written, the caves were known as the Fish River Caves, and sometimes the Binda Caves. The name was confusing, as the caves were not actually on the Fish River, and in 1884 the name was changed to Jenolan Caves. In the 1880s, Jenolan Caves began to emerge as a genuine tourist destination. As more caves within the system were discovered and opened up, development began within the caves, including the construction of pathways, and measures were introduced to ensure the protection of formations.

The guide, written by an enthusiastic 22 year old, provides a detailed description, not only of the caves themselves, but also of the means by which visitors might enjoy them by providing advice on travel to the caves, accommodation available for visitors and equipment required to explore them. In addition, Rawson includes some sketches of geological features in the caves.

The volume is dedicated to Mr Geo. Cardinal ‘In grateful remembrance of their most enjoyable visit to the Fish River Caves’. This statement implies that Mr Cardinal was present on the expedition. Unfortunately Mr Rawson does not name any of the group that travelled to the Caves, although it is believed that there were at least eight ladies in the underground party. It is intriguing to know the link between Mr Cardinal and the author of the Guide …

We do know that four years after the expedition Mr Rawson married Mr Cardinal’s adopted daughter Matilda. Was Matilda one of the eight ladies on the expedition? Did they meet and fall in love on the trip, with the romantic backdrop of the Caves? Or did Mr Rawson write the account whilst courting Matilda in an effort to gain Mr Cardinal’s approval?

The original Guide is located in the Mitchell Library’s manuscript collection at MLMSS 9411.

The manuscript has recently been published by the Jenolan Caves Historical & Preservation Society and this interesting edition can be found in the Mitchell Library collection at 551.47099/1 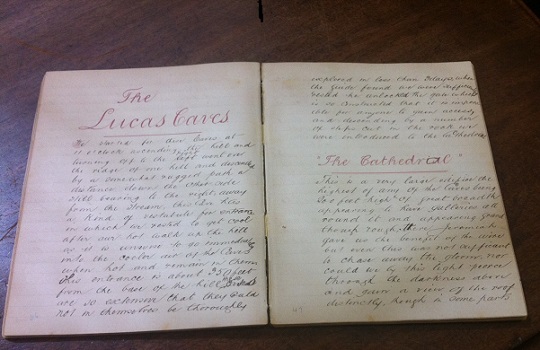