All the Holtermann negatives were made by the wet-plate process. That is, the glass plates were hand coated with a solution of collodion which contained light sensitive silver salts.

Collodion was a syrupy liquid made by dissolving gun cotton [pyroxylin] in alcohol and ether. Collodion had been used by doctors in the mid 19th century to cover incised wounds. Poured over a cut, the ether and alcohol quickly evaporated, leaving a thin plastic film covering the skin. For photographers, collodion provided a method of coating a glass plate with a clear film of photosensitive material.

Merlin and Bayliss didn't just point a camera and take a photograph. They had to make them and the process was slow. In the confines of a darkroom, they coated each glass plate with a syrupy mixture of collodion containing salt, dunked it in silver nitrate solution to make the plate light sensitive and placed it in the camera. You can actually see where the photographer held the plates between thumb and index finger during the coating of the Holtermann negatives, as shown below. 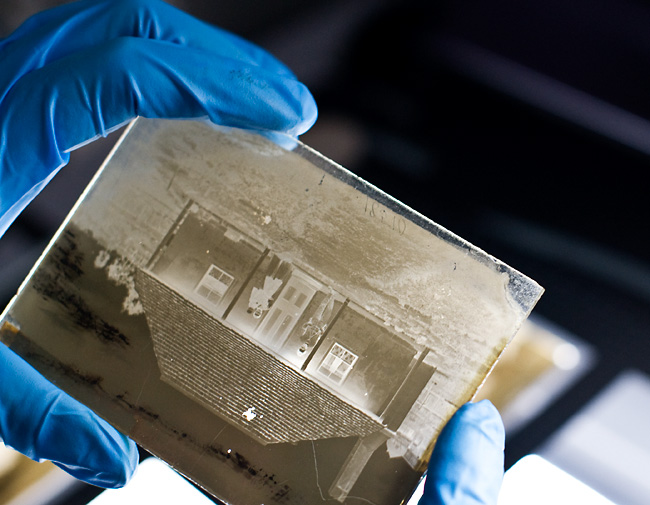 After an exposure of several seconds or even minutes, the plate was developed without delay, as collodion lost its light sensitivity when dry. This meant that wet-plate photographers like Merlin and Bayliss had to take their darkrooms with them wherever they went, so that they could manufacture and process the negatives, one at a time.

Merlin and Bayliss used a horse to pull their darkroom-on-wheels, which pops up in a number of street scenes in the collection along with the carriage driver. 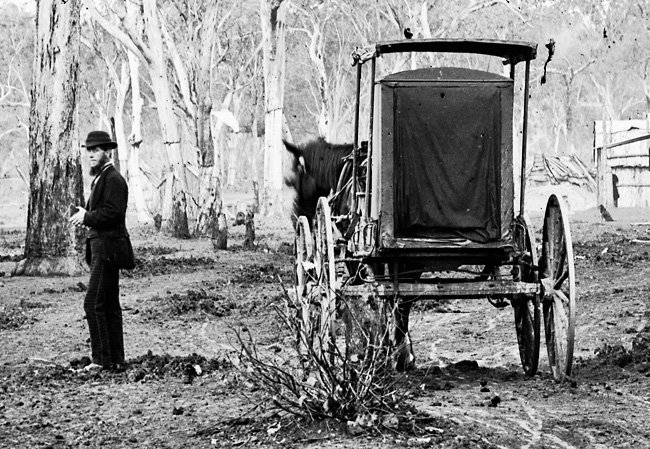