Gus Peirce (1840-1919) was an American captain of Murray River steamers, jack of all trades and adventurer, who wrote a book of his travels entitled Knocking About - Being Some Adventures of Augustus Baker Peirce in Australia. Originally printed by Yale University Press in 1924, it was reprinted as a facsimile by Shoestring Press in Wangaratta in 1984.

Gus Peirce was a larger than life character and in their preface, the Australian publishers warned:

"We do caution, however, against taking everything Gus said as gospel; he did stray from the path of accuracy occasionally"

During mid 1872, Peirce visited the gold fields between Bathurst and Orange with his touring panorama show, but soon after the big strike at Tambaroora in October of that year, he returned to Hill End with a fellow thespian and set up a tent theatre. He described their adventure thus:

“Two Germans, Byer and Holtermann, had for more than eight years been patiently working a seemingly worthless claim on Hawkin’s Hill… Suddenly their tireless efforts were rewarded by the opening of a large and exceedingly rich vein. The news of their fortune, which lost nothing by the length of its journey, soon reached Sydney, together with rumors of rich findings on other claims; and Hill End experienced a startling boom. Thousands of the shifting, adventurous, fortune-seeking part of the population flocked to the district to take out five- and ten-acre leases under the mining acts, followed by the usual collection of sundowners, gamblers, rum-sellers, and storekeepers which is ever present during such times. Claims which could not have been given away forty-eight hours before were now easily floated for fabulous sums.

At this time I met an old friend from Ballarat, William B. Gill, journalist, dramatist, and actor, who some twenty years later moved to Chicago and there gained an enviable reputation. Gill had decided to go to Hill End and open a theatre, and as I had then separated from Chapman he invited me to enter a partnership with him to that end. A few days later we were on our way to the diggings in search of quarters wherein to open business. The weather was hot and the journey tiresome, for we were obliged to climb the steep face of Monkey Hill over a straight dirt road, very unlike the splendid zigzag which now renders the passage comparatively easy. As no building of sufficient seating capacity was to be found, we were much pleased to learn that a large tent with corrugated iron sides and canvas top was for sale at Tambaroora, some four miles away. On further inquiry it was found to be forty by eighty feet square, with a nine-foot wall, and in excellent condition. We effected its purchase for sixty pounds through the assistance of the well known Jerry Dwyer, or, as he was more commonly called, “Jerry the Jingler.” This man had been, a year previously, a poor and struggling miner; but he had been so fortunate as to strike gold, and now he was the sole owner of one of the richest claims at Hill End. In addition to his mining interests he was a large manufacturer of soda waters and temperance cordials, and he agreed to advance us a hundred pounds if we would open a spa in our theatre and sell only his products. This we did. Little difficulty occurred in procuring a site on which to erect the tent, for Clyne, the hotel-keeper, was very glad to give land enough adjoining his hostelry on the main and only street, so that he might benefit from the thirst of the theatre patrons.

After much trouble in transporting the tent, which, owing to the poor conditions of the roads—they were utterly unfit for wagon traffic—had to be packed on the backs of horses, it was finally erected and filled with seats made by driving posts into the ground and placing boards across them. The orchestra consisted of an old three- legged square Collard & Collard piano the missing leg of which was replaced by a porter case. The two extant panoramas were shipped up from Bathurst to act as scenery, and the Theatre Royal opened a week later to a packed house which represented not more than half of those who wanted to get in. 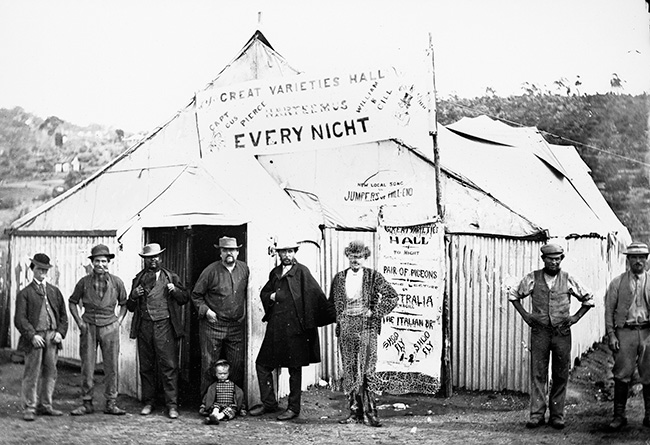 "The entertainments consisted principally of local farces written by Mr. Gill. They introduced local characters and scenes from mining life. The author’s wife, an excellent actress who appeared under the name of Deering, played the leading female roles; the playwright himself assumed the important male parts, supported by an ever changing company of average worth. I was the principal vaudeville artist, and I gained some popularity by my legerdemain, monologues, comic songs, and ventriloquism.

Although many of the profession who drifted to the Theatre Royal from various parts of the earth were not lacking in talent and ability, there were also some whose work could not bear out their pretensions. Among these latter was one John Longford, a discharged warden of the Darlinghurst jail at Sydney, who asserted that his hand some face and fine voice had won him success in vaudeville under the name of “Joe Baxter of the Pacific Slope,” al though he admitted that he had never set foot on American soil. The theatre, being then short of talent, engaged him, and he appeared between the acts for a short song and dance. After performing Josephus Orange Blossom in a fairly acceptable manner, he essayed a clog dance. During it his immense feet became unmanageable, and he fell over the footlights on to the orchestra, knocking over and breaking six kerosene lamps in his course and setting fire to the stage. I was acting as stage manager. I rushed on with two buckets of water, which I poured over the burning oil. It ran quietly through the piano and over the legs of the pianist, who immediately jumped up and fell over the prostrate form of the unfortunate dancer. The sight of the fire terrified the audience of the crowded and inflammable theatre and almost created a panic. But the efforts of the management succeeded in reassuring them and enabling everybody to move out in an orderly manner, to the strains of God Save the Queen, which I pounded out of the water-soaked piano in a manner rarely heard. Baxter was dismissed, much to his chagrin. But he soon found employment aiding the old sexton of the Hill End church in digging graves; and he proved much more useful to the dead than he had been in amusing the living.

When the Theatre Royal had been in operation about six weeks, the large and well-appointed Constable-Guggenheim theatre was ready for business; and as we had a good opportunity to sell out our business, we did so and dissolved partnership.”

Peirce was also a competent draughtsman and made £12 to £15 a day surveying and drawing mining claims. He stayed in Hill End for eight months, building a three room wattle and daub cottage for his family, before moving on to a new strike at Jaw Bone, 80 kilometres away on the road to Dubbo.

During his stay in Hill End, the American and Australasian Photographic Company photographed his theatre and took his portrait.