On the 26th of August 1894 a group of more than 300 union shearers torched the paddle steamer Rodney on the banks of the Darling River in Mildura. The Rodney was being used to carry 45 non-union shearers headed for central NSW in a bid by property owners to beat a three-states union strike. The strike itself was a response to pastoralists slashing the shearers pay rates.

The Rodney was ambushed whilst moored and though there were no reports of injury in the burning, 8 arrests were made but no convictions recorded. This act of terrorism shocked Australia and led to calls for tougher action against the rise of militant unionists leading to this proclamation issued by the government. 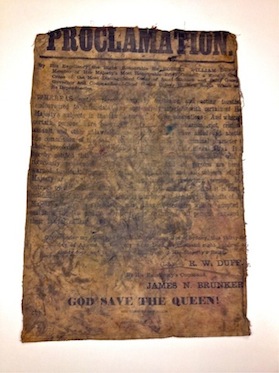 Dirt has covered much of this proclamation, dated 31 August 1894, however the text calls to desist in activities that “interfere with the lawful pursuits of her Majesty’s peaceful subjects”. Two copies of this broadside, printed on cotton, were stitched together and appear to have been used to store something (it would be ironic if it had been used to store wool).

This unique acquisition was unearthed in the A.C.T. in 1959 and recently donated to the Library and demonstrates how an object can bring an almost forgotten piece of Australian history back to life again. There are no other known copies of this proclamation in this format and the Library’s Collection Preservation and Storage Branch are cleaning and removing much of the grime. When completed, the proclamation will be located in the Mitchell Library at X/58.