One of our readers recently made mention of using Trove to find information about his ancestor. Trove gives access to the National Library of Australia’s newspaper digitisation project (1803-1954), which has enabled researchers to rapidly find information previously difficult to locate.

An important newspaper reference to the American and Australasian Photographic Company in the Sydney Morning Herald had eluded my reading of the microfilm in the 1980s, but now, when read together with the known reference of 21 September 1870, quoted in a previous blog (Holtermann and the A&A Photographic Company), it provides the reason for the company’s activities, their method of operation and their rate of photography.

The new reference, quoted in full, is from the Sydney Morning Herald 5 Sept 1870 p8. It was written by Beaufoy Merlin to inform the residents of Sydney of the company’s recent arrival and to explain their plans.

“The glorious sun stays in his course and plays the alchymist."-SHAKESPEARE'S " KING JOHN."

THE AMERICAN AND AUSTRALASIAN PHOTOGRAPHIC COMPANY

As the mere announcement of a scheme so gigantic as PHOTOGRAPHING SEPARATELY every HOUSE and BUILDING in Sydney, and the other towns in the colony, may be received with some degree of doubt; it may be necessary to explain to the public-First, the object the Company have in view in this undertaking; second, what they have already done; third, what they further purpose doing.,

First.-The proprietors of this enterprise believe that in these colonies Photography has not had that scope which might be expected from an art so important, and yet so universal in its application to the requirements of taste and industry. Hitherto it has been devoted almost entirely to portraiture, and but very little attention has been given to its true artistic character, as in the case of Landscape Illustration ; or its commercial value as a means of public information. To attain these two very desirable results, the undertaking was projected some twelve months ago, and from the success which has attended their efforts in this direction - more particularly in the sister colony of Victoria - the Company have every confidence that the public of New South Wales will in like manner appreciate the enterprise. Generally the attempts that have been made in outdoor Photography have been - with a few solitary exceptions - of a very primitive character. The whole arrangement was so cumbersome that it is not to be wondered at that the projectors of a scheme so vast as that now propounded, and so much opposed to past experience, should be met at the threshold of their undertaking with warning of certain failure. Times, however, are continually altering. "The old order changeth and giveth place to the new," and what is looked upon as impossible to-day may become an established fact to-morrow. The system adopted by the Company is so entirely novel, that by means of the best instruments, the best operators, and certain improvements in lenses and cameras, each operator can take over a hundred views daily. Photographers as a rule, consider ten or twelve a pretty fair average for a day. The economy of time being thus the great secret of success, it is obvious that under the ordinary system it would be quite impossible to carry out the scheme.

Second. - The A. and A. P. Co. have already taken photographs of almost every building in Melbourne, as well us in every town of any importance in Victoria. The negatives (many thousands) are deposited in the Company's office in Melbourne, to which place, by forwarding the number, copies can be dispatched to any address at an hour's notice. The south-eastern townships of this colony have already been taken, while others are in course of completion, each town averaging about 300 separate views. 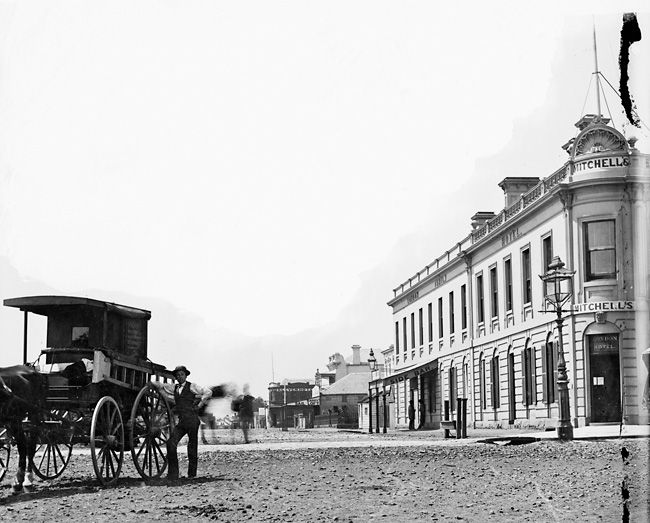 Third. - The Company, in commencing operations in Sydney, will advertise in the daily journals the particular streets they intend working that day. As every house or shop will be taken separately, parties will have an opportunity of setting off their places to the best advantage. The main object the company have in view is simply the collection of a series of trustworthy views which will be of public interest and utility. For this purpose, arrangements are being made to open an exhibition where card views of every house in the colonies will be arranged panoramically, thus forming

AN IMMENSE PHOTOGRAPHIC DIRECTORY OF ALL AUSTRALIA.

Several of the Company's vans having arrived overland from Melbourne, business will commence This Day.

Every house in Crown-st. will be taken This Day.

Every house in Riley-street will be taken To-Day.

Every house in Bourke-st. will be taken This Day.

Intercolonial Exhibition. Will be published on the 10th September, price one shilling

each, twenty instantaneous views of the Exhibition. These pictures being taken in the FRACTIONAL PART OF A SECOND, show not only the mere building, but the life and bustle arising from the thousands assembled outside.

From this it can be seen that they could take ‘over 100’[1] photographs per day and averaged 300 views per town; they intended to make ‘an immense photographic directory of all Australia’ and their negatives were kept in Melbourne; they had more than one mobile photographic van (probably three, judging by their proposed first day’s work in Sydney) and were able to take instantaneous photographs. Despite the ambitions of Merlin, it seems the American and Australasian Photographic Company was soon overextended. A&A vans were operating as far afield as Brisbane and Tamworth. Merlin resigned as manager for NSW and sold the Sydney studio to Alexander Carlisle in February 1872. He moved to Hill End with Charles Bayliss, advertising there under the company name in April 1872.

[1] Two weeks later, an advertisement from A&A in Sydney Morning Herald 21 Sept 1870 said each of the Company’s operators could take 70-100 views per day.