The Library's reading rooms are open. Before you visit, please read Visiting the Library.

The Library has recently acquired a hoard of works relating to the study of longitude in the 18th and 19th Centuries. These include unpublished material from Louis de Freycinet’s personal archive. 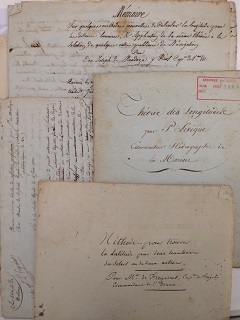 Long sea journeys, such as the European voyages of discovery to Australia and the South Pacific, were difficult and dangerous without accurate methods of determining global positioning by longitude. The French government established the Bureau des

Emanuel Swedenborg’s proposal, titled Methodus nova inveniendi longitudines locorum terra mariaque per lunam (1766) describes his method for determining longitude by lunar observations. Cook’s Endeavour voyage used the method of lunar distances for navigation, allowing his crew to chart the eastern coast of Australia. Another proposal, from the French naval officer Charnières, Memoire sur l’observation des longitudes en mer (1767) describes his invention of a measuring device he called the mégamètre.Longitudes to tackle this problem and the British government launched the Longitude Prize. A reward of £20,000 was offered to the first to devise an accurate method of calculating longitude. The problem attracted some of the great thinkers of the day. The texts acquired by the Library represent some of the ideas proposed to solve this problem.

Other proposals submitted to the Board made use of timekeeping devices. John Arnold was an English watchmaker who produced three of the chronometers used on Cook’s Resolution voyage. Included in the new acquisitions is a letter written by the Czech astronomer Christian Mayer in 1781, describing and praising Arnold’s chronometers.

Louis de Freycinet was appointed to the Bureau des Longitudes between his two voyages to Australia, and the Library has acquired some of the documents collected while he worked in this capacity. The archive contains Freycinet’s own translation of a text by Mendoza y Rios on the Reflecting Circle, an astronomical device used for measuring longitude. It is likely that the Reflecting Circle was used by Freycinet on his voyages to Australia, on which he and his crew made scientific discoveries and charted the coast of the continent.

The Longitude prize was eventually awarded to John Harrison, who invented a practical marine chronometer. Because the race to claim this prize contributed to the discovery and charting of Australia by Europeans, these new collections of published and unpublished material are significant additions to the State Library’s collections.

Freycinet's archive can be found in the Mitchell Library collection at MLMSS 9716. 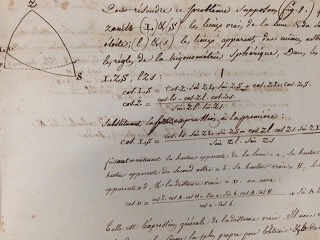 Previous post
A map of the world in Japanese
Next post
Drawings through the microscope in 1665: Robert Hooke's Micrographia