Recently arrived from Scotland via London are some of the last remaining items which belonged to the family of Governor Lachlan and Elizabeth Macquarie. The Library has purchased a travelling medicine chest which belonged to the Macquarie family, along with a delicate silhouette portrait of Lachlan Macquarie the younger. These items have been kept in a private family collection in Scotland. 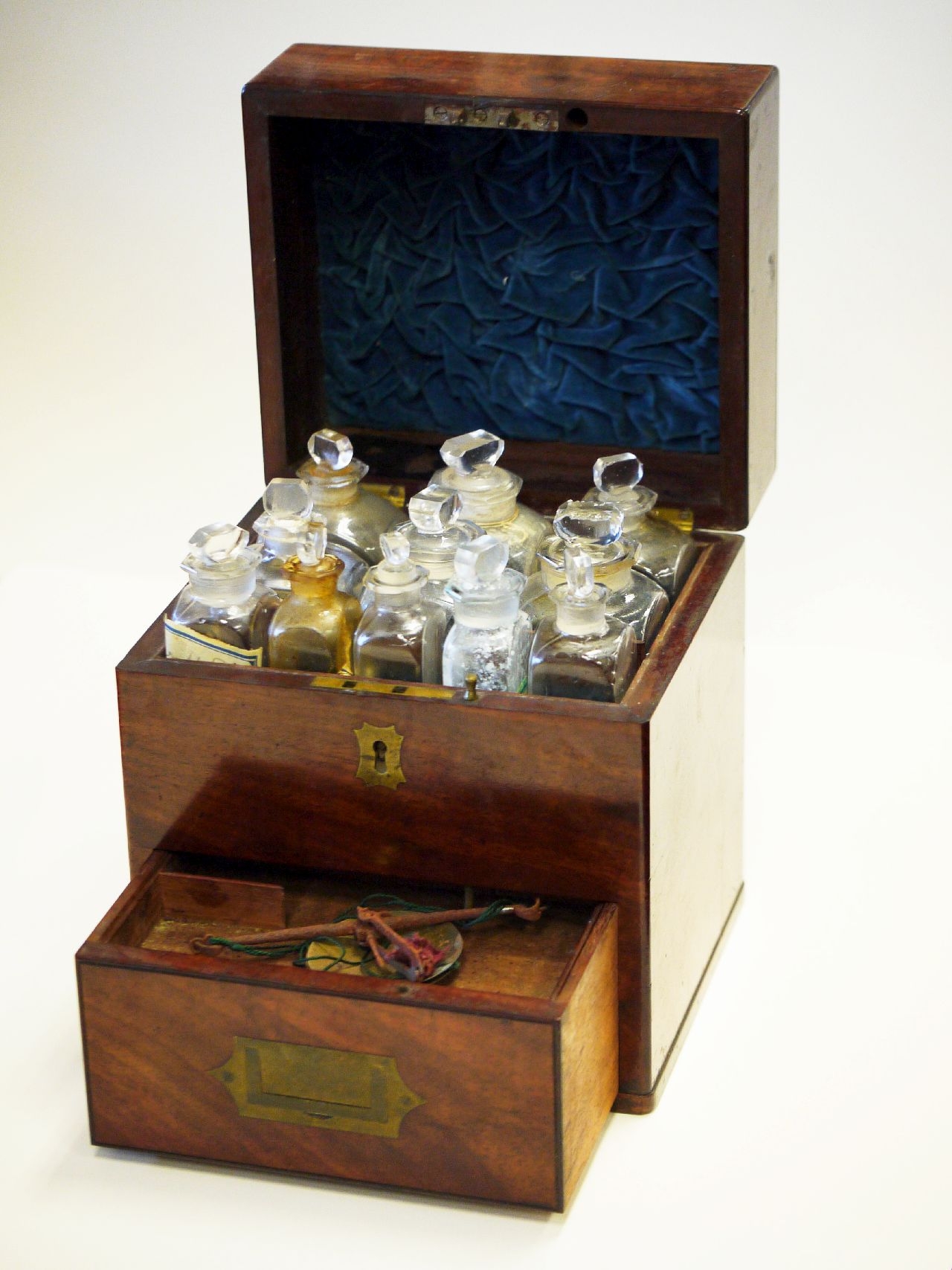 This chest is an example of nineteenth century campaign furniture. It is made of mahogany with crushed velvet lining in the lid. It is finely figured to the front with a plainer grain mahogany timber used on the sides. The chest is filled with 11 glass bottles with glass stoppers which housed various medicines. On opening the chest, we are transported back to the smells of the 19th century pharmacy. Iodine and eucalypts are some of the stronger scents that emanate when the lid is opened.

Accompanying the box are some papers which include an inventory of the medicine chest. This inventory was written on 28th February 1848 and includes substances such as: Gregory’s Mixture, Paragoric elixir, Butcher’s Pure Epsom salts, Spirits Hartshorn, Best Indian Rhubarb, Powder of jalap, Calomel and Essence of peppermint.

Lachlan Macquarie junior was born in New South Wales in 1814. He was indulged by his parents and enjoyed a privileged position in the NSW colony. Governor Macquarie describes his son’s 6th birthday in 1820 where;

“At Half past 8 O’Clock in the morning, Lachlan, being dressed as a Highlander for the first time in a Suit of Tartan and Bonnet, proceeded with a number of his juvenile friends on a water Excursion in the Govt. Barge, attended by his own little Cutter, together, with three Boats full of the Natives…” Governor Lachlan Macquarie’s journal, 28 March, 1820

Lachlan accompanied his parents home to Britain in 1822. At the age of sixteen Lachlan junior joined the British army and in 1836 he married Isabella Campbell, daughter of a landowner on the neighboring Hebridean island of Jura. Tiring of army life, Lachlan sold his captaincy in the Scots Greys in 1841 and retired to live on the Jarvisfield estate. He lived an extravagant lifestyle, heavily indebted to his friend William Drummond. In May 1845 he died as a result of a fall on the stairs of Craignish Castle, his wife’s family home. The fall was a result of extensive drinking with Drummond. He was thirty-one when he died and left no heirs.