During the early part of 1873, Beaufoy Merlin was occupied photographing west of the Blue Mountains for Holtermann’s proposed Gallery of Colonial Views and Products. He returned to Sydney for the latter half of the year and by 2 August 1873, the Sydney Morning Herald noted that

Mr Beaufoy Merlin has taken a considerable number of photographic views of Sydney for the first section of " Holtermann's Intercolonial Exposition."

Unlike the earlier gold town images, Merlin’s photographs of Sydney were taken on larger format negatives, each measuring a massive 10x12 inches (25x30cm). Three years earlier, Merlin had recorded "the Picturesque Nooks and Corners of Sydney Cove” using a 6x8 inch (15x20cm) camera, but the newer 10x12 inch equipment from Holtermann offered much greater quality. These larger negatives are now being scanned and have revealed astonishing detail. 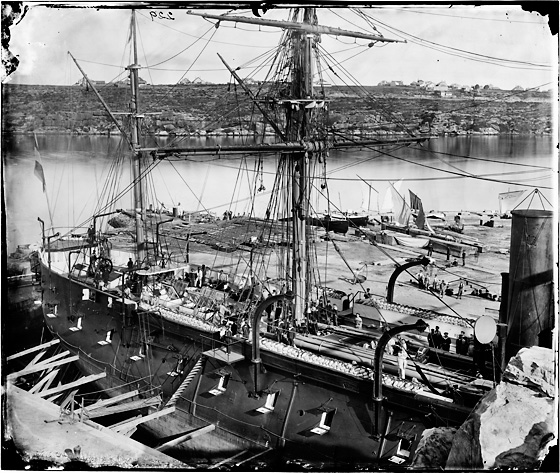 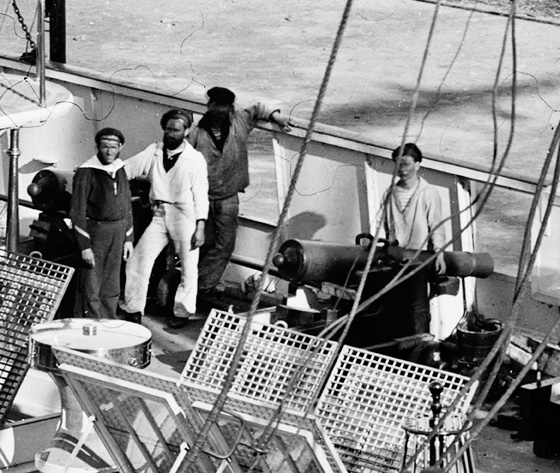 This photograph of the French warship Atalante in Fitzroy Dock on Cockatoo Island, with Balmain in the background, was taken in August 1873. Built in 1865, the iron clad Atalante had a protruding brass bow for ramming lesser vessels. It had taken part in the Franco Prussian War in 1870 and at the time of this photograph was the flagship of the Pacific Squadron, under the command of Rear Admiral Baron Roussin.

Beaufoy Merlin was particularly pleased with his photographs of the Atalante and wrote about them in the Town and Country Journal.

... One of the solar pictures which I took on the occasion of my last visit to the           Atalante, of which an engraving accompanies the present pen-and-ink sketch, is    taken  from the rocks to the north-west, and shows her "ram," with its massive         projecting extremity of solid brass, her swelling sides, portholes, section of the dock, and men at  work. The steps to the bottom of the basin as well as [its depth], are fairly indicated. Probably there is no one more difficult to please in procuring a picture of this kind than the landscape photographer himself. I may therefore be permitted to say in behalf of the one referred to, that it gave me satisfaction.[1]

Sadly, these images of Atalante were among the last photographs taken by Merlin. He contracted pneumonia and died, age 43, in September 1873.