The State Library has recently acquired some intriguing new digital archives available for use in the Library or off-site to registered users. These are perpetual access archives (this means that the Library owns them forever and access is not subject to renewal). 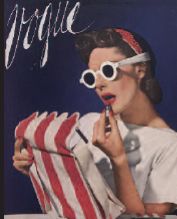 Much interest has already been generated by The Vogue Archive.

Vogue preserves the work of the world’s greatest fashion designers and has documented changing fashion for over a century. This archive covers the entire output from the first issue in 1892 through to the current month and includes every page from cover to cover in glorious colour including all those wonderful advertisements.

The US edition of National Geographic Magazine.

National Geographic is the internationally recognised standard in the field and includes authoritative photojournalism and considerable Australian content.

This archive contains several tools for exploring the content including an ability to create timelines based on words and phrases used in the magazine. All the content of the original magazine is included from its beginnings in 1884 through to 1994 including:

With the centenary of WWI approaching, the Library has purchased two archives dealing specifically with the Great War: The First World War: Personal Experiences and Women, War and Society.

The First World War: Personal Experiences explores WWI through a variety of resources including diaries, scrapbooks, photographs, posters and maps. Maps of the trenches are also included and it’s possible to explore the trenches and tunnel systems through 360° panoramic views and walkthrough images.

Women, War, and Society, 1914-1918 examines the impact the War had on women and includes a mix of reports, press cuttings, photographs and other primary source material. It covers women’s activities in Australia, Canada, South Africa and other regions.