The Royal Anthropological Society of Australasia collection (MLMSS 7603) holds a great deal of significance for Meredith Lawn who is currently appraising and cataloguing documents for digitisation as part of the Rediscovering Indigenous Languages Project. This collection was the first collection Meredith ever worked on as an archivist back in 1991. Half-way through her post-graduate archives diploma at the University of NSW, she was offered paid employment during the semester break to arrange and describe this collection in preparation for microfilming by the then custodian, the Geographical Names Board of NSW. The collection was donated to the Mitchell Library the following year and Meredith joined the staff of the Mitchell Library in 1994. Now, almost 23 years since she first became acquainted with the collection, Meredith is re-opening those very same boxes to prepare them for digitisation: a case of changing technology but same archivist!

The records of the Royal Anthropological Society of Australasia are significant for the numerous lists of Aboriginal place names and their meanings collected by the Society. In August 1899, the Society circulated survey forms to members and government officers in each colony to collect information on Aboriginal place names. In many instances, information was gathered from first-hand contact with Aboriginal residents of the districts in which the names existed. The information contained in the documents may therefore be considered to be as close as one could hope to get to an authoritative source for the meanings of many names, the linguistic origins of which were even then becoming obscured with the passing of the older generations of Aboriginal people.

In addition to place names, the Society also collected extensive vocabulary lists of individual Australian languages by way of another survey form asking for the Aboriginal equivalents for a list of English words and for 'any other information regarding their Folklore, Traditions, Rites, and Customs'.

Extracts from the results of both these surveys were published in the Society’s journal from about 1900 to 1913.

While these important documents are being digitised, we are fortunate to have the assistance of volunteer Sandra Hawker who is capturing details from every page in a spreadsheet including the names of the collectors and informants in each district. The collection is also receiving preservation treatment. 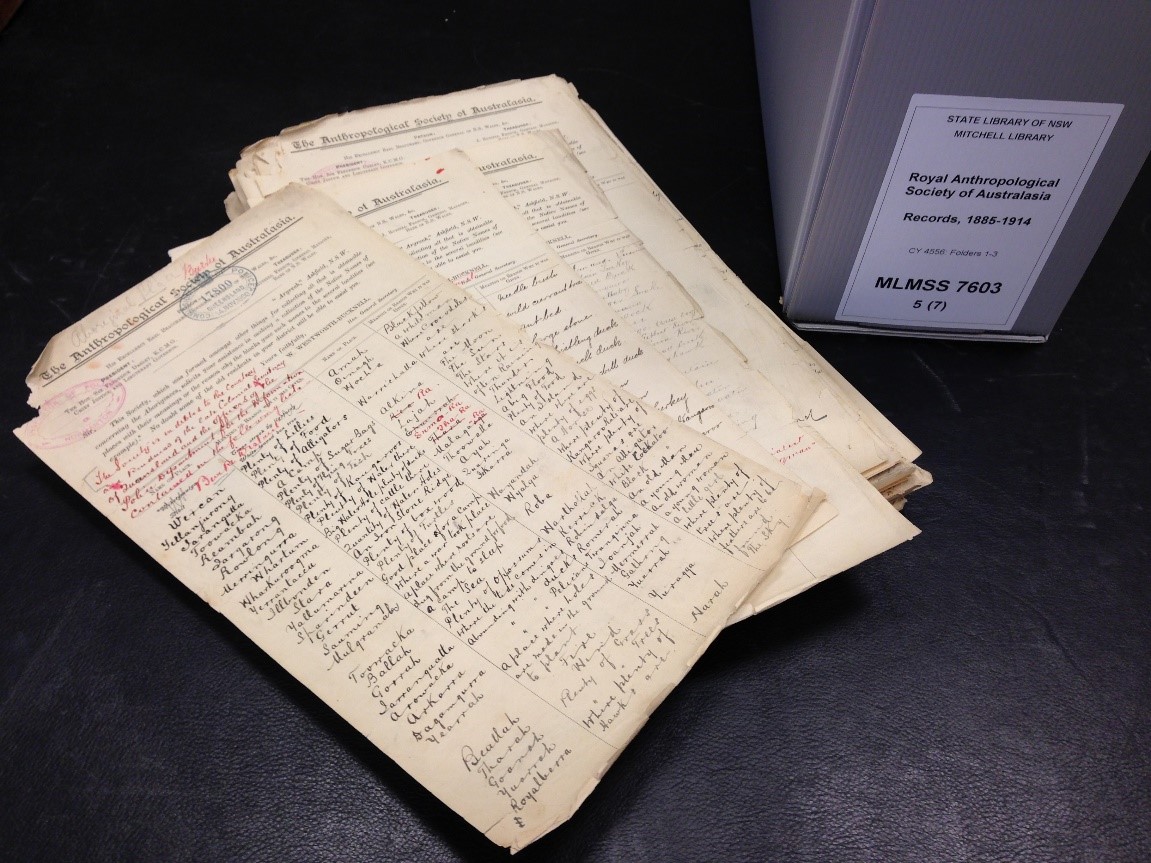 Papers from The Royal Anthropological Society of Australasia collection (MLMSS 7603)