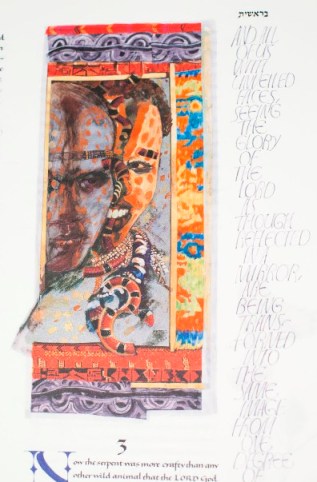 A team of scribes and artists throughout the UK and US worked on The Saint John’s Bible using a range of traditional and modern techniques. Calfskin vellum, goose quills and handmade inks were used for the text and illuminations while a new script was designed and computers were used to layout the text and designate areas for illuminations.

The Saint John’s Bible features over 160 major illuminations which have been produced using gold, silver and platinum leaf. The illuminations incorporate themes and imagery from a range of cultures and faiths. Indigenous rock paintings from Australia and Africa have been used for the Creation artwork while a menorah and illuminations from the Quran inspired the artwork for Jesus’ genealogy. Modern day imagery such as DNA strands, satellite photos and images from the Hubble Telescope have also been used to depict a range of Biblical scenes.

The Saint John’s Bible has been published in a Heritage Edition. 299 of these fine art limited edition copies have been produced and the State Library has acquired one of these for its collections. The Heritage Edition is a reproduction of the original manuscript and consists of seven volumes bound in handcrafted Italian calf skin. Gold and silver foil is used throughout the volumes to represent the 160 illuminations of the original. The “show-through” effect of the original translucent vellum is recreated by reverse printing on the Heritage Edition’s cotton pages.