Over the past few years, we have received a number of World War I diary collections from families of those who served from New South Wales. Among these collections are two belonging to Sydney men: Geoffrey Gaden and Allan Allsop.

The story of how the Library came to receive Gaden’s diary is an amazing one. This one volume diary was found earlier this year hidden under floorboards in a house in Manly, only discovered when the current owners began renovating the house. It is not known why the diary was hidden there, but we do know that Gaden’s brother, Ronald and his wife lived in the house during the war. The current owners wanted to return the diary to descendants of Geoffrey Gaden.

We were able to confirm that Gaden had served as an officer with the British Expeditionary Force. His last years of schooling were spent at Lansing College in Sussex. Gaden then served in the Connaught Rangers, an Irish Regiment of the British Army. He served with the Rangers until the end of 1915 and then transferred to the 6th Battalion in France from December 1915 to April 1918. He served with a Trench Mortar Battery in France and Belgium and also in Russia during 1917.

This one volume diary dates from 1916 when Gaden was serving in France, specifically in the Loos sector. It contains general information about trench and gun locations, along with hand-drawn maps of the trench lines and notes on the work of the Royal Field Artillery (RFA). Gaden details the workings of 2 inch trench howitzers, including diagrams of the guns and their placement in the Loos sector and ‘Railway Alley’. Later in the war, as an acting Captain, he was sent to a machine gun training school in the UK. He served in the Motor section of the Machine Gun Corps, where Vickers machine gun barriers were mounted onto motorcycles and sidecars. 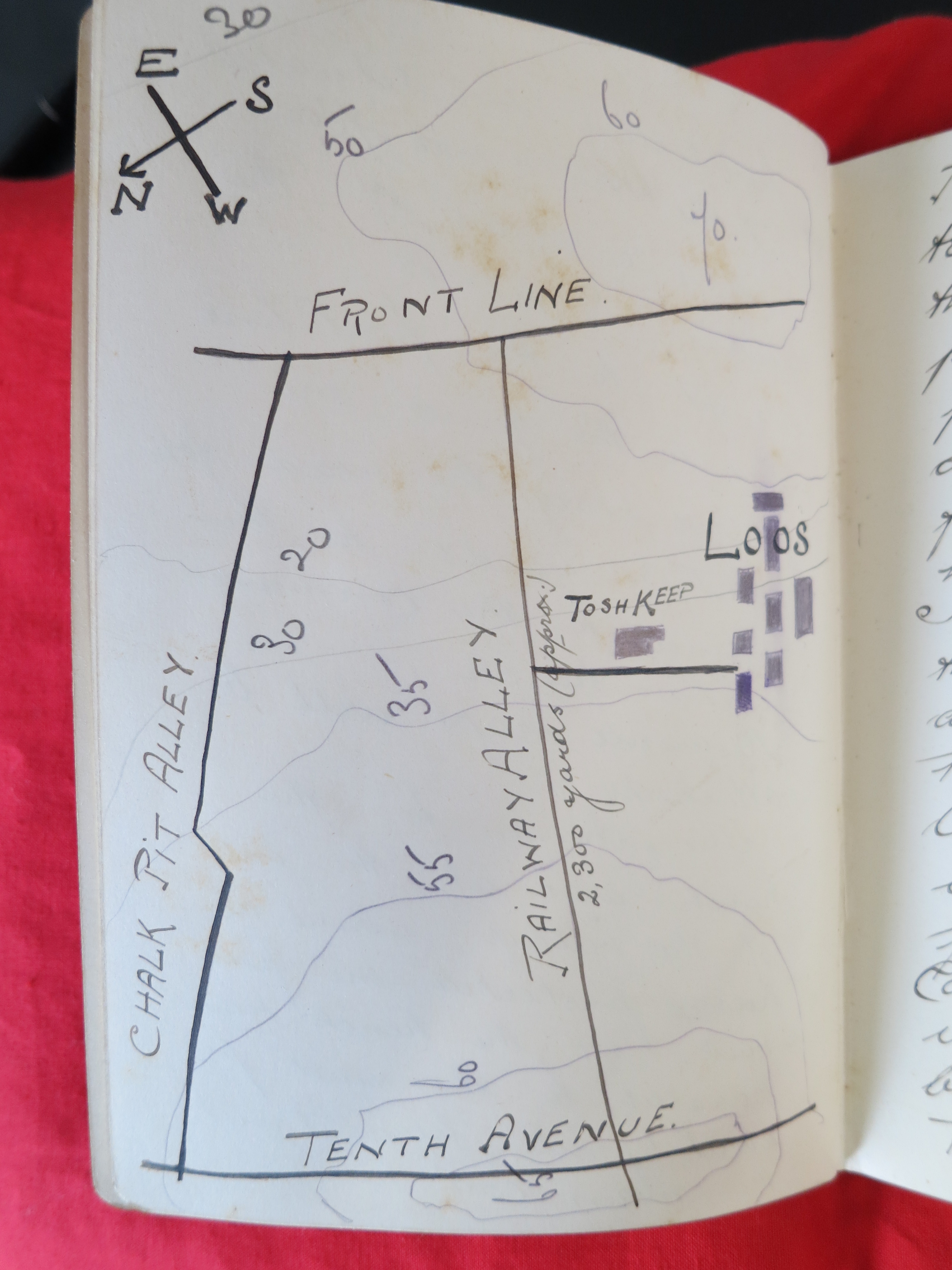 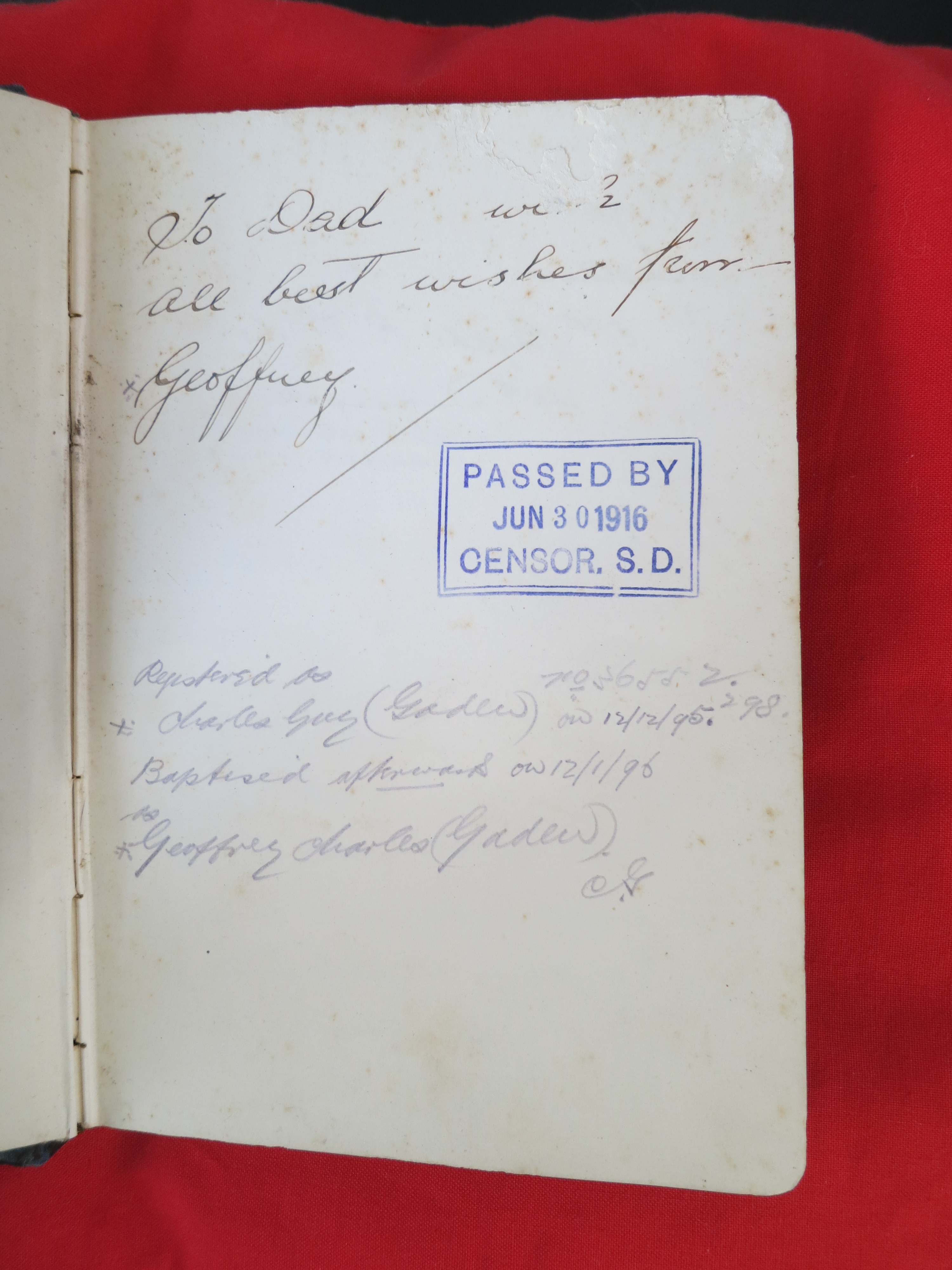 Gaden remained in the British Army as a regular officer after the war. The Connaught Rangers were disbanded in 1922 and Gaden transferred to the Bedfordshire and Hertfordshire Regiment and was engaged to be married to Barbara Landon in early 1930.

Geoffrey and Barbara had two children during the 1930s and by WW2, the family were living in London. Geoffrey was sent across to France early in WW2, he was one of the last members of the British army to leave Dunkirk.

As the family were living in London during the blitz, the Gadens decided to send their small children back to Australia for safety. Michael and Valerie were 7 and 5 when they left London (1942). They stayed with a foster family at Glen Innes and attended the primary school. Their parents came out to Australia in 1944 and took the children to Sydney where they settled initially at the Watson’s Bay hotel, while a house was built in Pymble. Geoffrey retired from the British Army in 1943. After living in New York he moved to Gordon, Sydney in 1949. He died in Pymble, Sydney in 1967. The current owners of the Manly house managed to track down Michael, Geoffrey’s son in South Australia. Michael didn’t know that his father kept a diary and plans to travel to Sydney to view it soon. An article about this extraordinary find was published in the Daily Telegraph in September.

The Library purchased 5 volumes of stretcher-bearer, Allan Allsop’s diaries in 1920. Recently his son donated additional material belonging to his father who served as a stretcher bearer and despatch rider for the 8th Australian Field Ambulance in Egypt and France. Allan Allsop served in a number of significant battles on the Western Front, includes Fromelles, which he detailed in his diary;

Backwards & forwards we travelled between the firing line and the R.A.P. with knuckles torn and bleeding due to the narrow passage ways. "Cold sweat", not perspiration, dripped from our faces and our breath came only in gasps. The communication trench was about 1½ miles long. By the time we had completed 2 trips (six miles) with the numerous zig-zag turns in the trench and the stoppages caused by the traffic up and down, we were weak and completely exhausted. Stretcher-bearing is no light work. From volume 2 of Allsop’s diaries, MLMSS 1606 / Item 2.

The additional material includes a portrait postcard of Allan on his motorbike as a despatch rider and permission for Allan to visit Paris on leave. A drinking flask and stretcher strap relate directly to Allan’s service as a stretcher-bearer and compliments his diary collection. An additional group photograph of men from the 8th Australian Field Ambulance shows Allan standing second to right. The man standing on the far right is Langford Colley-Priest whose letter diary the Library purchased in 1919. Finally, after almost 100 years, we can put faces to two diarists in our collection.