One of the great things about the American and Australasian Photographic Company’s images of Hill End and Gulgong is that the people in the streets generally appear dressed as they were in their day-to-day lives. There are exceptions, mainly when individuals are photographed outside of their own home, wearing their best clothes and posing as a couple or family for the camera. This is not surprising, as the A & A Company's method of operation was to advertise their intention to photograph in the next day or two.

But there is one instance in which a direct comparison can be made of daywear and formal attire and that is found in negative numbers 18146 and 18220, both of which show Mr Daniel Doherty’s boot store in Gulgong. In the first photograph we see Daniel Doherty, hand on hip, standing with his work associates and hangers-on in their work clothes. We also see a small black dog at the lower right of frame. 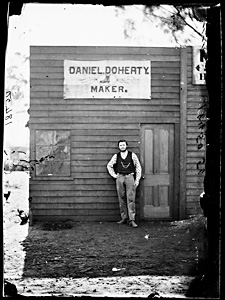 There seems nothing unusual about this image until we view negative 18220. In this photograph we once again see Daniel Doherty (holding his daughter’s hand) with associates and hangers-on posing in front of his boot store, except this time all in their best attire. The tallest man is wearing an impressive frock coat, although his dusty shoes belie the formality of his outfit. The boot-maker with the bib apron in the first image is now on the right wearing a fancy shirt and coat. He later appears as manager of Doherty’s branch store in Home Rule, negative no. 18450 (see left). Rising to the occasion, the little black dog from the last photograph even performs a trick for the camera! 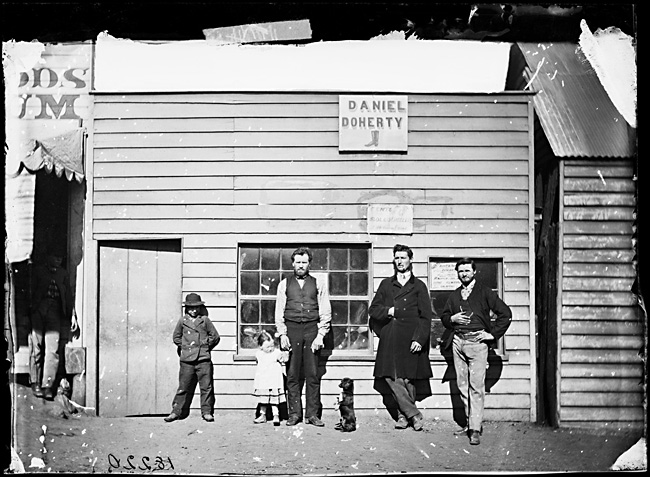 From the negative numbers 18146 and 18220 we can see that the photographs would have only been taken a day or two apart, as we know that the A & A photographers could take 70-100 photos in a day's work. This implies that Daniel Doherty may have requested that the photographers return the next day to re-photograph him and his staff in their best attire – a most interesting and unusual event in the A&A negatives collection!

Words and research by Alan Davies.