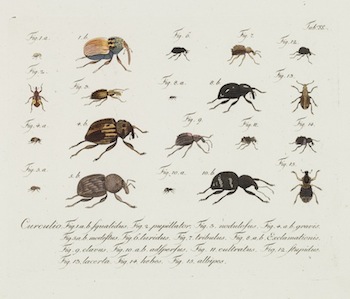 Arthropods (which include insects) make up around 80% of all known animal species and the most diverse insect of all is the beetle. The famous remark by the British evolutionary biologist J.B.S. Haldane that “God has an inordinate fondness for beetles” was due to there being over 400,000 named species of beetles so far. In fact, there are more species of beetles than any other animal on earth.

For natural biologists in the 18th and 19th century the specimens sourced by Joseph Banks and brought back from the voyages of Captain Cook must have been exciting and exotic indeed. The Banks specimens (52 Australian beetles and 18 from New Zealand) are thought to be the ones that were recorded in a book recently purchased by the Library: Natursystem aller bekannten in – und ausländischen insecten by C.G. Jablonsky & J.F.W. Herbst. The 10 volume text also includes 2 quarto atlases filled with copious colour illustrations of beetle specimens and was printed between 1785 and 1805. It is one of the earliest known attempts to survey all known beetles at that time.

The Library has a strong collection of works pertaining to the natural history from Cook’s voyages and this addition, not available in any other collection in the country, adds to the depth and breadth of the collection. The volumes are located in Mitchell Rare Books at MRB/Q86-92.