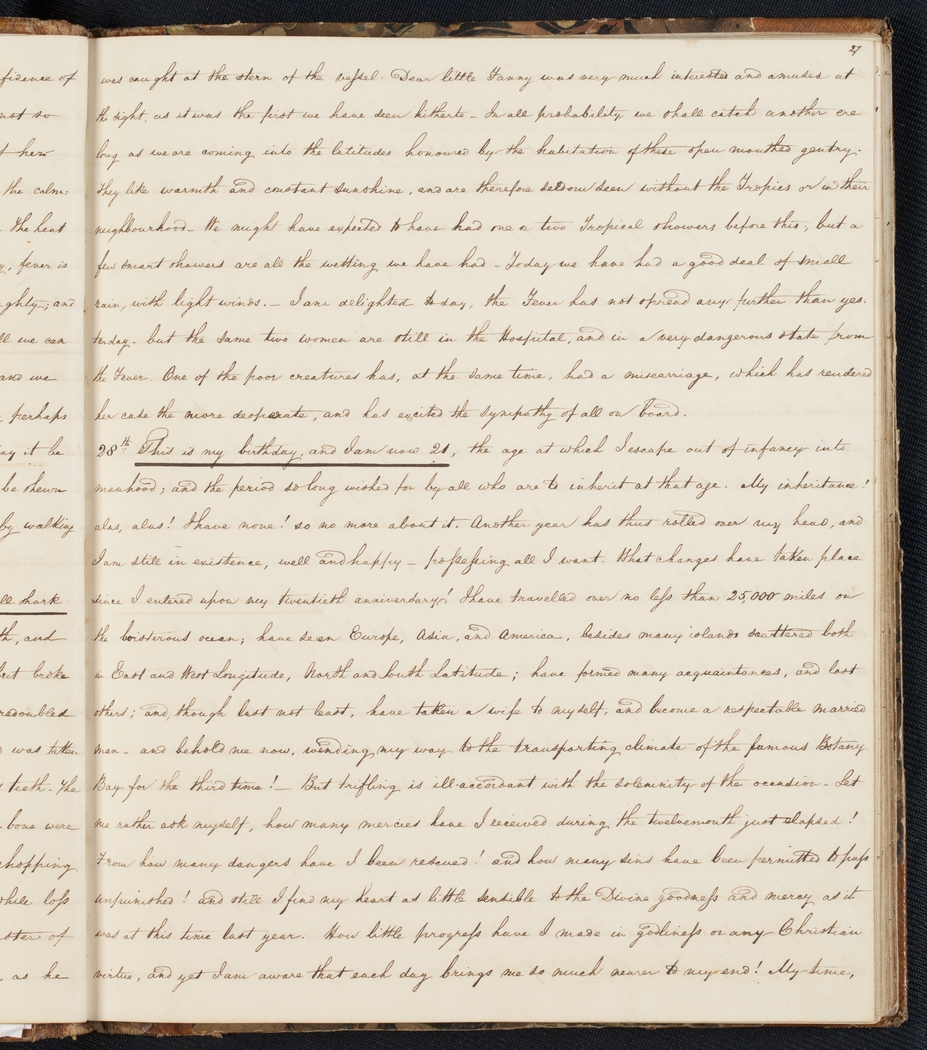 ... was caught at the stern of the vessel. Dear little Fanny was very much interested and amused at the sight, as it was the first we have seen hitherto - in all probability we shall catch another ere long as we are coming into the latitudes honoured by the habitation of these open mouthed gentry. They like warmth and constant sunshine, and are therefore seldom seen without the Tropics or in their neighbourhood. We might have expected to have had one or two Tropical showers before this, but a few smart showers are all the wetting we have had. Today we have had a good deal of small rain, with light winds. I am delighted to say, the Fever has not spread any further than yesterday, but the same two women are still in the Hospital, and in a very dangerous state from the Fever. One of the poor creatures has, at the same time, had a miscarriage, which has rendered her case the more desperate, and has excited the sympathy of all on board.

28th. This is my birthday, and I am now 21, the age at which I escape out of infancy into manhood; and the period so long wished for by all who are to inherit at that age. My inheritance! alas, alas! I have none! So no more about it. Another year has thus rolled over my head, and I am still in existence, well and happy - possessing all I want. What changes have taken place since I entered upon my twentieth anniversary! I have travelled no less than 25,000 miles on the boisterous ocean, have seen Europe, Asia, and America, besides many islands scattered both in East and West Longitude, North and South Latitude; have formed many acquaintances, and lost others; and, though last not least, have taken a wife to myself, and become a respectable married man - and behold me now, wending my way to the transporting climate of the famous Botany Bay for the third time! - But trifling is ill-accordant with the solemnity of the occasion. Let me rather ask myself, how many mercies have I received during the twelvemonth just elapsed! From how many dangers have I been rescued! And how many sins have been permitted to pass unpunished! And still I find my heart as little sensible to the Divine goodness and mercy as it was at this time last year. How little progress have I made in goodness or any Christian virtue, and yet I am aware that each day brings me so much nearer to my end! My time,