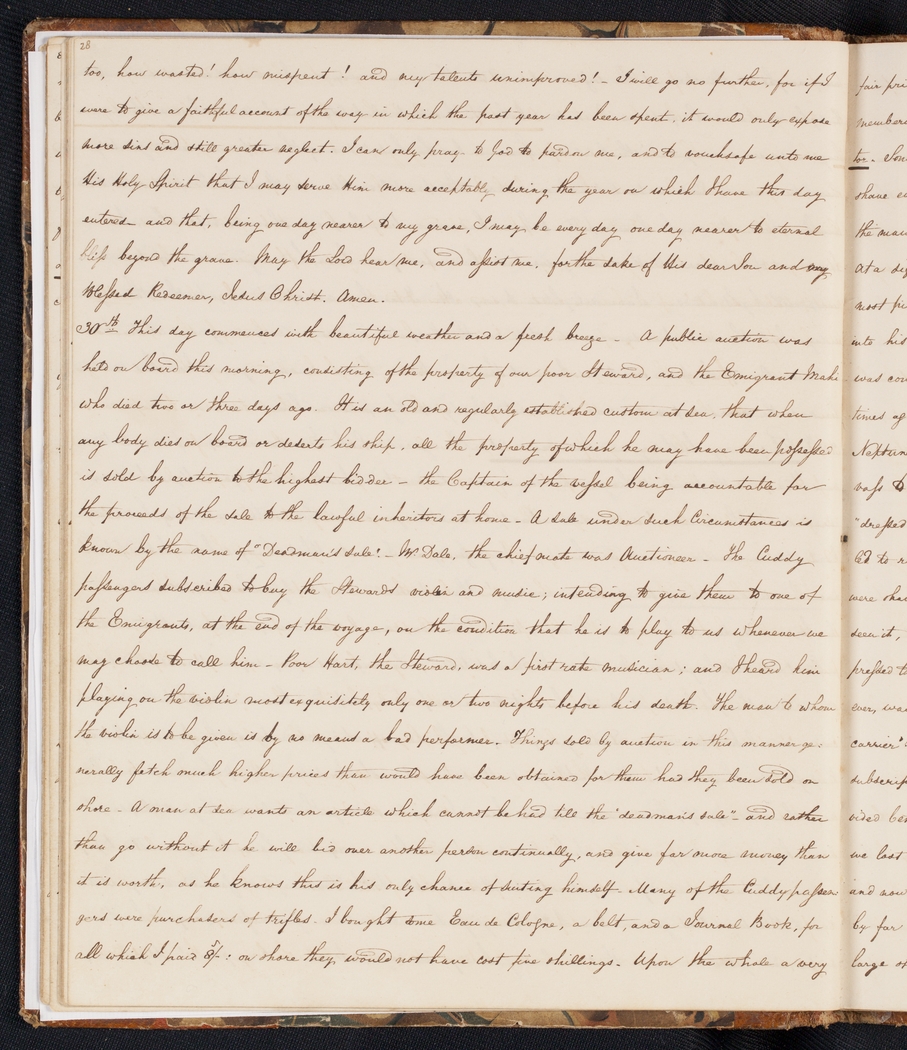 too, how wasted! How mispent! And my talents unimproved! - I will go no further, for if I am to give a faithful account of the way in which the past year has been spent, it would only exposure more dirt and still greater neglect. I can only pray to God to pardon me, and to vouchsafe unto me His Holy Spirit that I may serve Him more acceptably during the year on which this day I have entered and that, being one day nearer to my grave, I may be every day one day nearer to eternal life beyond the grave. May the Lord hear me, and assist me, for the sake of His dear Son and my Blessed Redeemer, Jesus Christ, Amen.

30th. This day commences with beautiful weather and a fresh breeze - A public auction was held on board this morning, consisting of the property of our poor Steward, and the Emigrant Mahi who died two or three days ago. It is an old and regularly established custom at sea, that when any body died on board or deserts his ship, all the property of which he may have been possessed is sold by auction to the highest bidder - the Captain of the vessel being accountable for the proceeds of the sale to the lawful inheritors at home - A sale under such Circumstances is known by the name of “Deadman’s Sale”. Mr Dale, the chief mate was Auctioneer. The Cuddy passengers subscribed to buy the Steward’s violin and music; intending to give them to one of the Emigrants, at the end of the voyage, on the condition that he is to play to us whenever we may choose to call him. Poor Hart, the Steward, was a first rate musician; and I heard him playing on the violin most exquisitely only one or two nights before his death. The man to whom the violin is to be given is by no means a bad performer. Things sold by auction in this manner generally fetch much higher prices than would have been obtained for them had they been sold on shore. A man at sea wants an article which cannot be had till the “deadman’s sale” - and rather than go without it he will bid over another person continually, and give far more money than it is worth, as he knows that is his only chance of suiting himself. Many of the Cuddy passengers were purchasers of trifles. I bought some Eau de Cologne, a belt, and a Journal Book, for all which I paid 8/-: on shore they would not have cost five shillings. Upon the whole a very