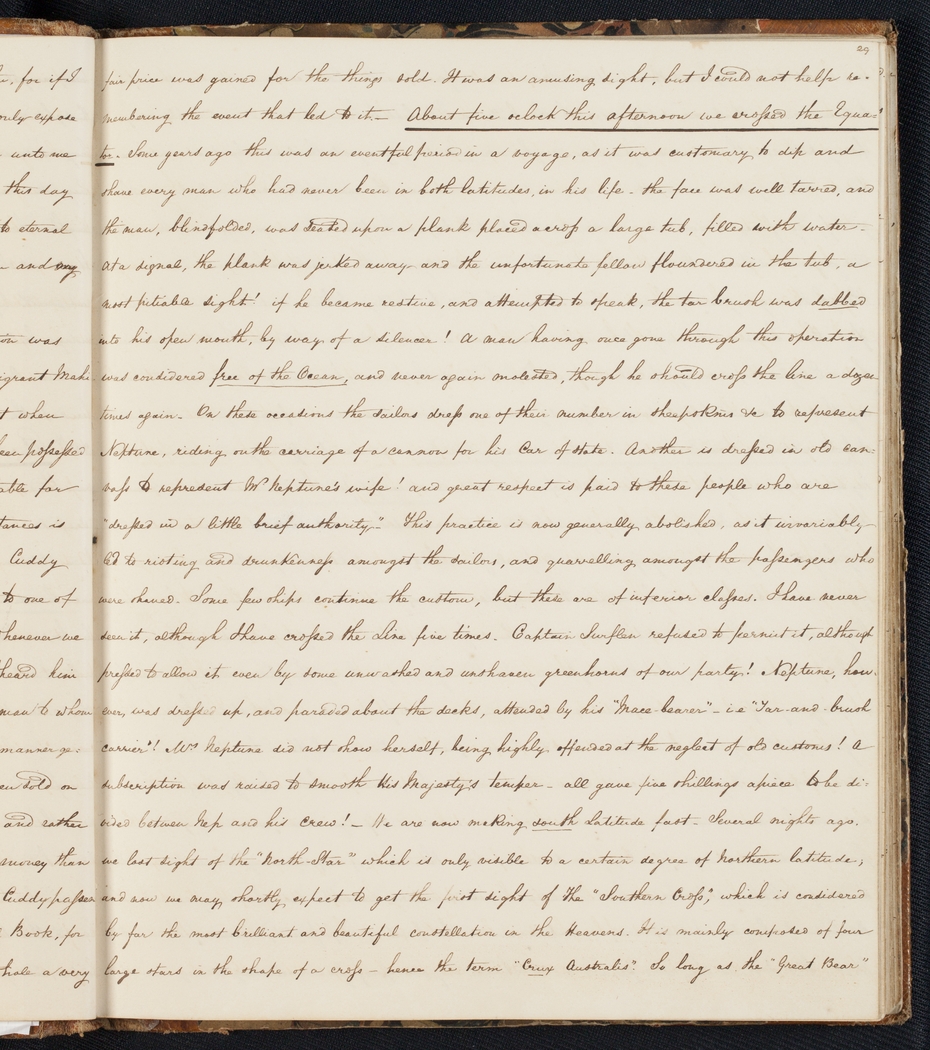 fair price was gained for the things sold. It was an amusing sight, but I could not help remembering the event that led to it. About five oclock this afternoon we crossed the Equator. Some years ago this was an eventful period in a voyage, as it was customary to dip and shave every man who had never been in both latitudes in his life - the face was well tarred, and the man, blindfolded, was seated upon a plant placed across a large tub, filled with water. At a signal, the plank was jerked away and the unfortunate fellow floundered in the tub, a most pitiable sight! If he became restive, and attempted to speak, the tar brush was dabbed into his open mouth, by way of a Silencer! A man having once gone through this operation was considered free of the ocean, and never again molested, though he should cross the line a dozen times again. On these occasions the sailors dress one of their number in sheepskins etc] to represent Neptune, riding on the carriage of a cannon for his Car of State. Another is dressed in old canvass to represent Mr Neptune’s wife! And great respect is paid to these people who are “dressed in a little brief authority”. This practice is now generally abolished, as it invariably led to rioting and drunkenness amongst the sailors, and quarrelling amongst the passengers who were shaved. Some few ships continue the custom, but these are of inferior classes. I have never seen it, although I have crossed the line five times. Captain Surflen refused to permit it, although pressed to allot it even by some unwashed and unshaven greenhorns of our party! Neptune, however was dressed up, and paraded about the decks, attended by his “Mace-Bearer” - i.e. “Tar-and-brush carrier”! Mrs Neptune did not show herself, being highly offended at the neglect of old customs! A subscription was raised to smooth His Majesty’s temper - all gave five shillings apiece to be divided between Nep and his crew! - We are now making south Latitude fast - Several nights ago we lost sight of the “North-Star” which is only visible to a certain degree of Northern latitude.; and now we may shortly expect to get the first sight of The “Southern Cross”, which is considered by far the most brilliant and beautiful constellation in the Heavens. It is mainly composed of four large stars in the shape of a cross - hence the term “Crux Australis”. So long as the “Great Bear”