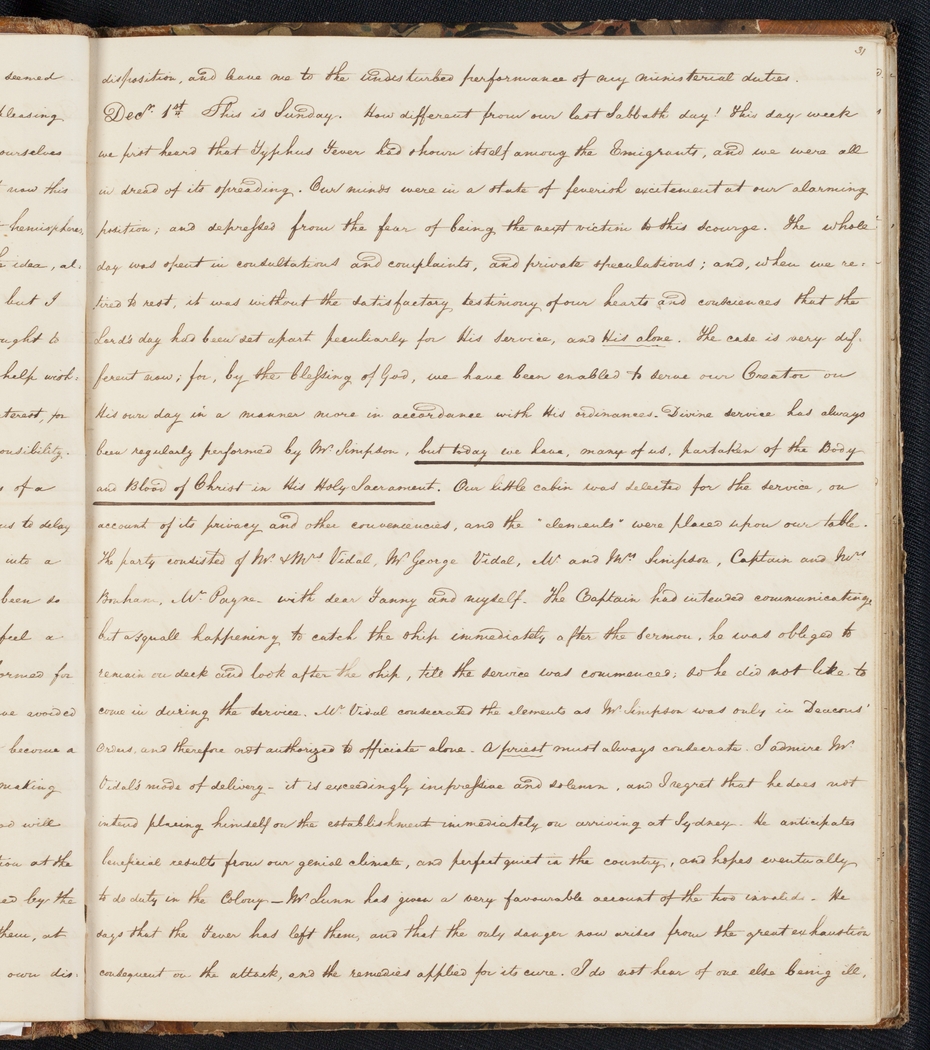 disposition, and leave me to the undisturbed performance of my ministerial duties.

Dec. 1st. This is Sunday. How different from our last Sabbath day! This day-week we first heard that Typhus Fever had shown itself among the Emigrants, and we were all in dread of its spreading. Our minds were in a state of feverish excitement at our alarming position; and depressed from the fear of being the next victim to this Scourge. The whole day was spent in consultations and complaints, and private speculations; and, when we retired to rest, it was without the satisfactory testimony of our hearts and consciences that the Lord’s day had been set apart peculiarly for His Service, and His alone. The case is very different now, for, by the Blessing of God, we have been enabled to serve our Creator on His own day in a manner more in accordance with His ordinances. Divine Service has always been regularly performed by Mr Simpson, but today we have, many of us, partaken of the Body and Blood of Christ in His Holy Sacrament. Our little cabin was selected for the Service, on account of its privacy and other conveniences, and the “elements” were placed upon our table. The party consisted of Mr & Mrs Vidal, Mr George Vidal, Mr & Mrs Simpson, Captain and Mrs Bonham, Mr Payne with dear Fanny and myself. The Captain had intended communicating but a squall happening to catch the ship immediately after the Sermon, he was obliged to remain on-deck and look after the ship, till the service was commenced; so he did not like to come in during the Service. Mr Vidal consecrated the elements as Mr Simpson was only in Deacons’ Orders, and therefore not authorized to officiate alone. A priest must always consecrate. I admire Mr Vidal’s mode of delivery - it is exceedingly impressive and solemn, and I regret that he does not intend placing himself on the establishment immediately on arriving at Sydney. He anticipates beneficial results from our genial climate, and perfect quiet in the country, and hopes eventually to do duty in the Colony - Mr Lunn has given a very favourable account of the two invalids - He says that the Fever has left them, and that the only danger now arises from the great exhaustion consequent on the attack, and the remedies applied for its cure. I do not hear of one else coming ill,