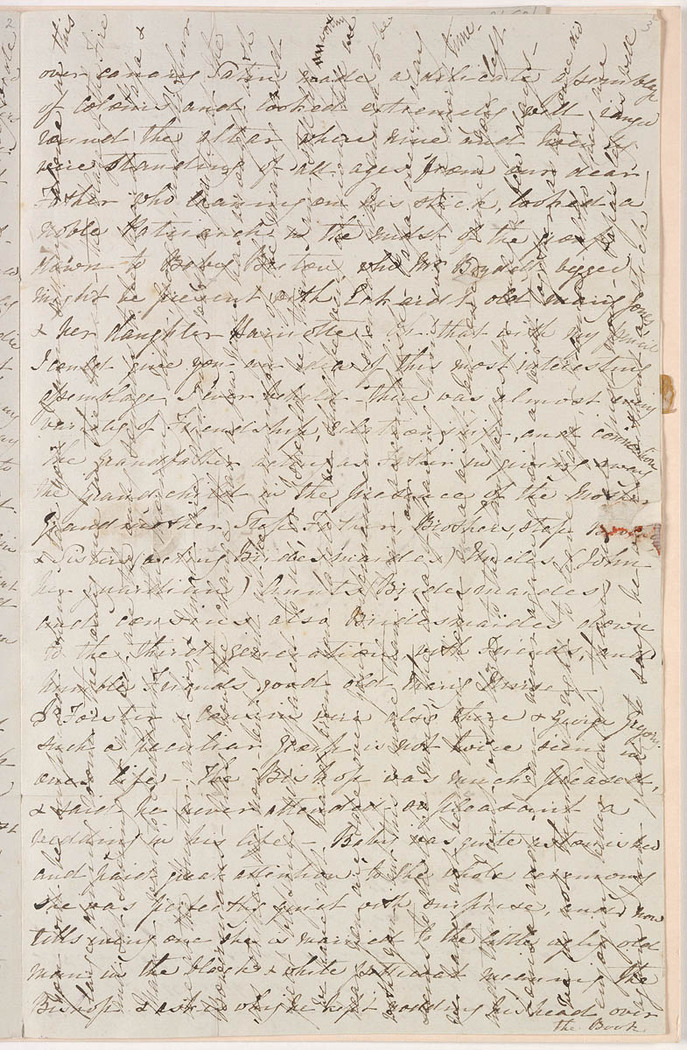 by Blaxland family
Transcript:
pelisse over canary satin made a delicate assembly of colours and looked extremely well ranged around the altar where nine and twenty were standing of all ages from our dear Father who leaning on his stick looked a noble Patriarch in the midst of the group, down to Baby [Breton] who Mr Boydell begged might be present with [Eckards] old Mary Jones and her daughter Harriotte. Oh that with my pencil I could give you an idea of this most interesting assembly I ever beheld - there was almost every variety of Friendship, relationship and connection. The Grandfather acting as Father in giving away the Grandchild in the presence of the Mother, Grandmother, Step Father, Brothers, [Step Brothers], & Sisters (acting as bridesmaides) Uncles (John her guardian) Aunts (Bridesmaides) and cousins also Bridesmaides down to the third generation, with Friends and humble Friends good old Mary aside J Forster & Cousin were also there & George Gregory. Such a peculiar group is not twice seen in one's life - the Bishop was much pleased, and said he never attended so pleasant a wedding in his life - Baby was quite astonished and paid great attention to the whole ceremony she was perfectly quiet with surprise, and now tells every one she is married to the little ugly old man in the black and white petticoat meaning the Bishop and asks why he kept nodding his head over the book, a peculiar motion of the head he has while reading, which did not escape her - she is much improved since you saw her, both in temper and appearance - we had a letter from her Papa the other day wherein he says he shall not come out to join his regiment here as he first intended but he proposes going from England to India and returning here in 3 years should the climate spare him - his health seems improved and he and he does not seem to be thinking of marrying as it was reported, Mama, I think I told you of the pleasant letters we lately received from Mary & Polly's Billy Molle, as Baby says, her health seems quite restored by the Voyage, and she seems favourably impressed with the new world around her. Colonel Handson was exceedingly kind to them, on landing he was the first person they met on the Beach - he was waiting with his carriage to take them to Colonel Cadell's house, Mr Molle's uncle, with whom they were living when they wrote. You will be surprised when I tell you I am sitting alone in this large dining room the only one in the House - the blaze of the Fire and [Tas/Tat] snoring at my feet are the only sounds to be heard - Papa & Mama went to Luddenham this morning. John, George, and Arthur are at the Hunter, and Loo, & Uncle are dining with a party at the Bowermans - Alas! how the change that a few years has wrought with us strikes me now but I will not be unmindful of the many and great blessings yet spared to us, or I should be, than I am still less worthy. We have not heard from you lately - we shall be very anxious till we hear you are safe over your confinement - I should like much to be with you - but this is more than I can accomplish - Papa every day seems to dislike more the idea of our leaving home even for a short time we have not been from home on a visit, but once since you left and then I went with Eliza to the Campbelle's for only a few days - Louisa and I can never again go on a visit together as we once did we do not think it right to leave Papa & Mama, altho they are enjoying better health than usual just now - Papa's leg is well again I am glad to say - he walks without a stick - Tell Susan - her Mother & Brothers are quite well they are living with Mr Riddle, her Mother as laundress and her Brothers to do anything their strength will admit of - Mr R says he is very much pleased with them they are so respectable in their conduct in general - I wish Mama had been fortunate enough to get them.
Call Number:
Ab 50
Published date:
1837 - 1923