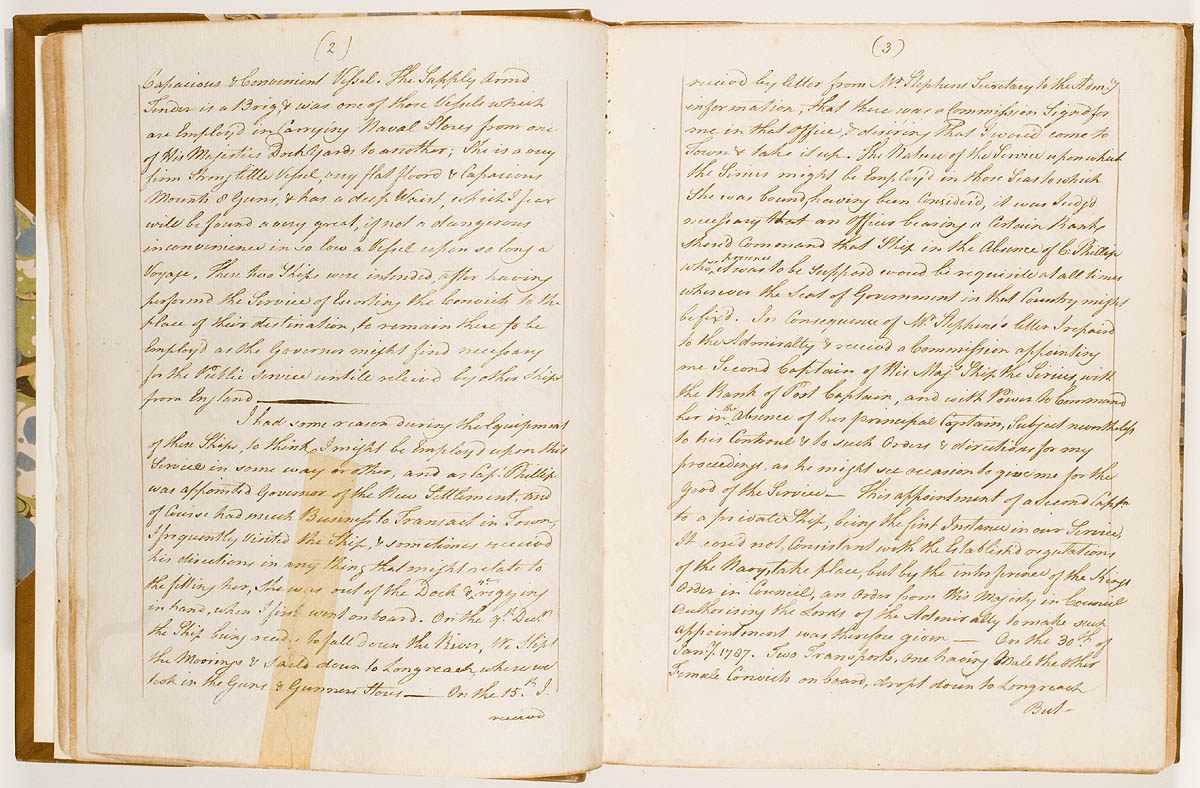 (2-3)
Capacious & Convenient Vessel. The Supply Armd Tender is a Brig, & was one of those Vessels which are Employ’d in Carrying Naval Stores from one of His Majesties Dockyards to another; she is a very firm Strong little Vessel, very flat floord & Capacious Mounts 8 Guns & has a deep Waist, which I fear will be found a very great, if not a dangerous inconvenience in so low a Vessel upon so long a Voyage. These two Ships were intended, after having performd the Service of Escorting the Convicts to the place of their destination, to remain there to be Employ’d as the Governor might find necessary for the Public Service untill relievd by other Ships from England --
I had some reason during the Equipment of these Ships, to think I might be Employd upon this Service in some way or other , and as Capt. Phillips was appointed Governor of the New Settlement, and of Cruise had much Business to Transact in Town, I frequently visited the Ship & sometimes receivd his direction in any thing that might relate to the fitting her, She was out of the Dock & the rigging in hand, when I first went on board. On the 9th Decm. the Ship being ready to fall down the River, We slipt the Moorings & saild down to Longreach, where we took in Guns & Gunners stores. On the 15th I receivd

received by letter from Mr. Stephens Secretary to the Admty. information , that there was a Commission Signd for me in that office, & desiring that I would come to Town to take it up. The Nature of the Service upon which the Sirius might be Employ’d in those seas to which she was bound, having been Consider’d, it was Judg’d necessary that an officer bearing a Certain Rank shou’d Command that Ship in the Absence of C: Phillip whose presence it was to be supposd woud be requisite at all times wherever the Seat of Government in that Country might be fix’d. In Consequence of Mr. Stephens letter I repaird to the Admiralty & receivd a Commission appointing me Second Captain of His Majs. Ship the Sirius with the rank of Post Captain, and with the Power to Command her Principal Captain, Subject nevertheless to his Control & to such orders & directions for any proceedings, as he might see occasion to give me for the Good of the Service. This appointment of a Second Capt. to a private Ship, being the first Instance in our Service, It cou’d not, Consistant with the Establish’d regulations of the Navy, take place, but by the interference of the Kings Order in Council, an Order from His Majesty in Council authorizing the Lords of the Admiralty to make such appointment was therefore given - On the 30th. of Janry. 1787. two Transports, one having Male the other Female Convicts on board, dropt down to Longreach But—