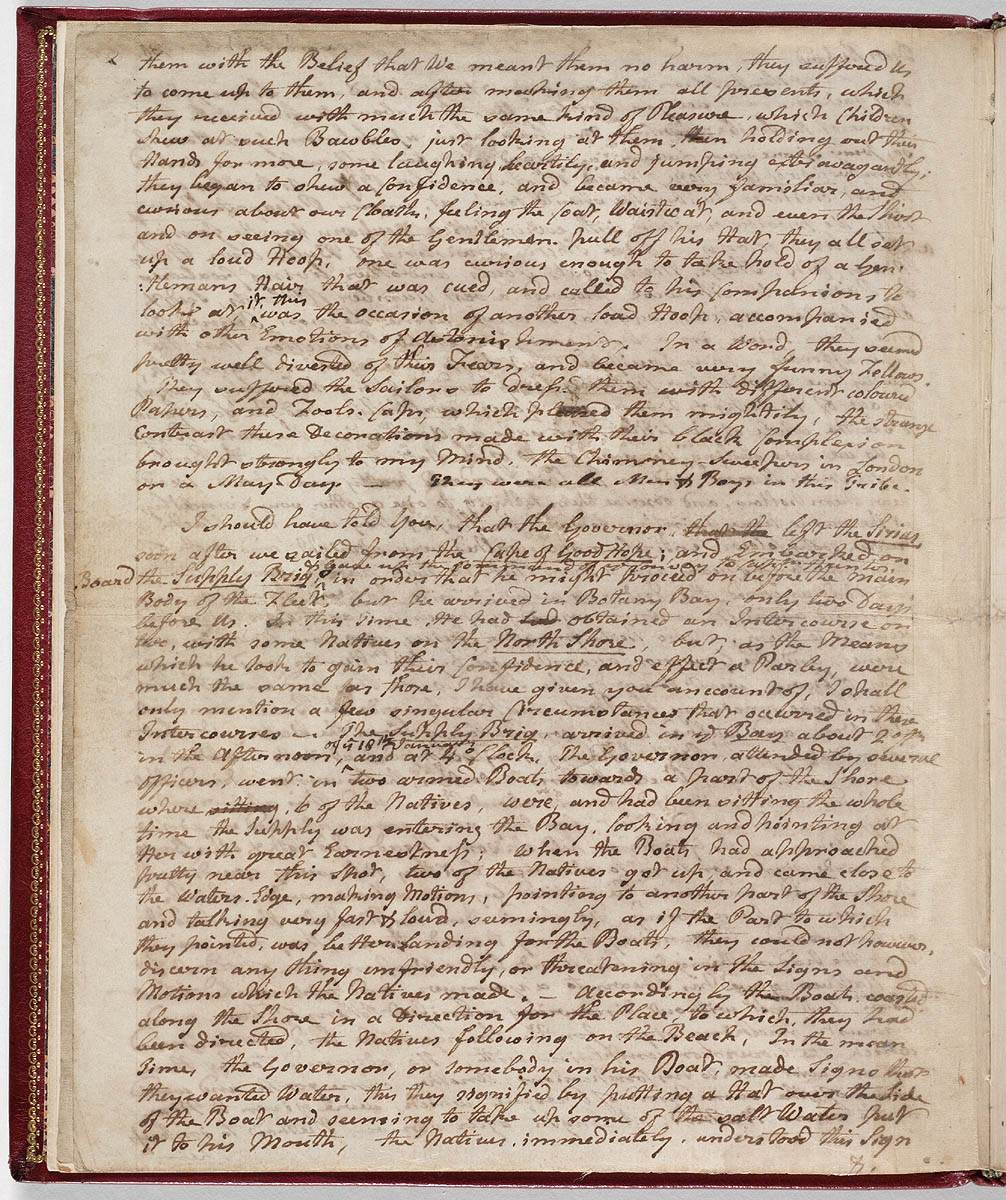 George Bouchier Worgan was probably born in 1757. He joined the Navy in 1775 and was appointed Surgeon on HMS Sirius in November 1786. Musically inclined, he brought his piano with him to the colony. Along with the crew of the Sirius, he left Australia to return to England in March 1791, arriving in April 1792. He had left his piano with Elizabeth Macarthur.
His journal is an account of the first five months of settlement in New South Wales, attached to a letter written to his brother Richard Worgan.
He married Mary Lawry, probably after his return from Australia, and they had two sons and a daughter. Both sons eventually migrated to Australia. Worgan died in March 1838, his death certificate says by apoplexy but there are other accounts which suggest suicide. (see Mollie Gillen, The founders of Australia; ADB)

with the Belief that We meant them no harm, they suffered Us to come up to them, and after making them all presents, which they received with much the same kind of Pleasure, which Children shew at such Bawbles, just looking at them, then holding out their Hands for more, some laughing heartily, and jumping extravagantly; they began to shew a Confidence, and became very familiar, and curious about ourCloaths, feeling the Coat, Waistcoat, and even the Shirt and on seeing one of the Gentlemen, pull off his Hat, they all set up a loud Hoop, one was curious enough to take hold of a Gentlemans Hair that was cued, and called to his Companions to look at it, this was the occasion of another loud Hoop, accompanied with other Emotions of Astonishment. In a Word, they seemed pretty well divested of their Fears, and became very funny Fellows.
They suffered the Sailors to dress them with different coloured Papers, and Fools-Caps, which pleased them mightily, the strange contrast these Decorations made with their black Complexion brought strongly to my Mind, the Chimney-Sweepers in London on a May-Day. - They were all Men & Boys in this Tribe.
I should have told You, that the Governor, left the Sirius soon after we sailed from the Cape of Good Hope; and Embarked on Board the Supply Brig & Gave up the Command of ye Convoy to Cap.tn Hunter, in order that he might proceed on before the main Body of the Fleet, but he arrived in Botany Bay, only two Days before Us. In this Time, He had obtained an Intercourse or two, with some Natives on the North Shore, but, as the Means which he took to gain their Confidence, and effect a Parley, were much the same as those, I have given you an account of, I shall only mention a few singular Circumstances that occurred in these Intercourses.
The Supply Brig, arrived in ye Bay about 2 ºClk in the Afternoon,of ye 18th January and at 4 O´Clock, The Governor, attended by several Officers, went in two armed Boats towards a part of the Shore where, 6 of the Natives, were, and had been sitting the whole time the Supply was entering the Bay, looking and pointing at Her with great Earnestness; When the Boats had approached pretty near this Spot, two of the Natives got up, and came close to the Waters-Edge, making Motions, pointing to another part of the Shore and talking very fast & loud, seemingly, as if the Part to which they pointed, was better landing for the Boats, they could not however, discern any thing unfriendly, or threatening in the Signs and Motions which the Natives made.
- Accordingly the Boats coasted along the Shore in a Direction for the Place, to which, they had been directed, the Natives following on the Beach. In the mean Time, the Governor, or somebody in his Boat, made Signs that they wanted Water, this they signified by putting a Hat over the Side of the Boat and seeming to take up some of the salt Water put it to his Mouth, the Natives, immediately, understood this Sign