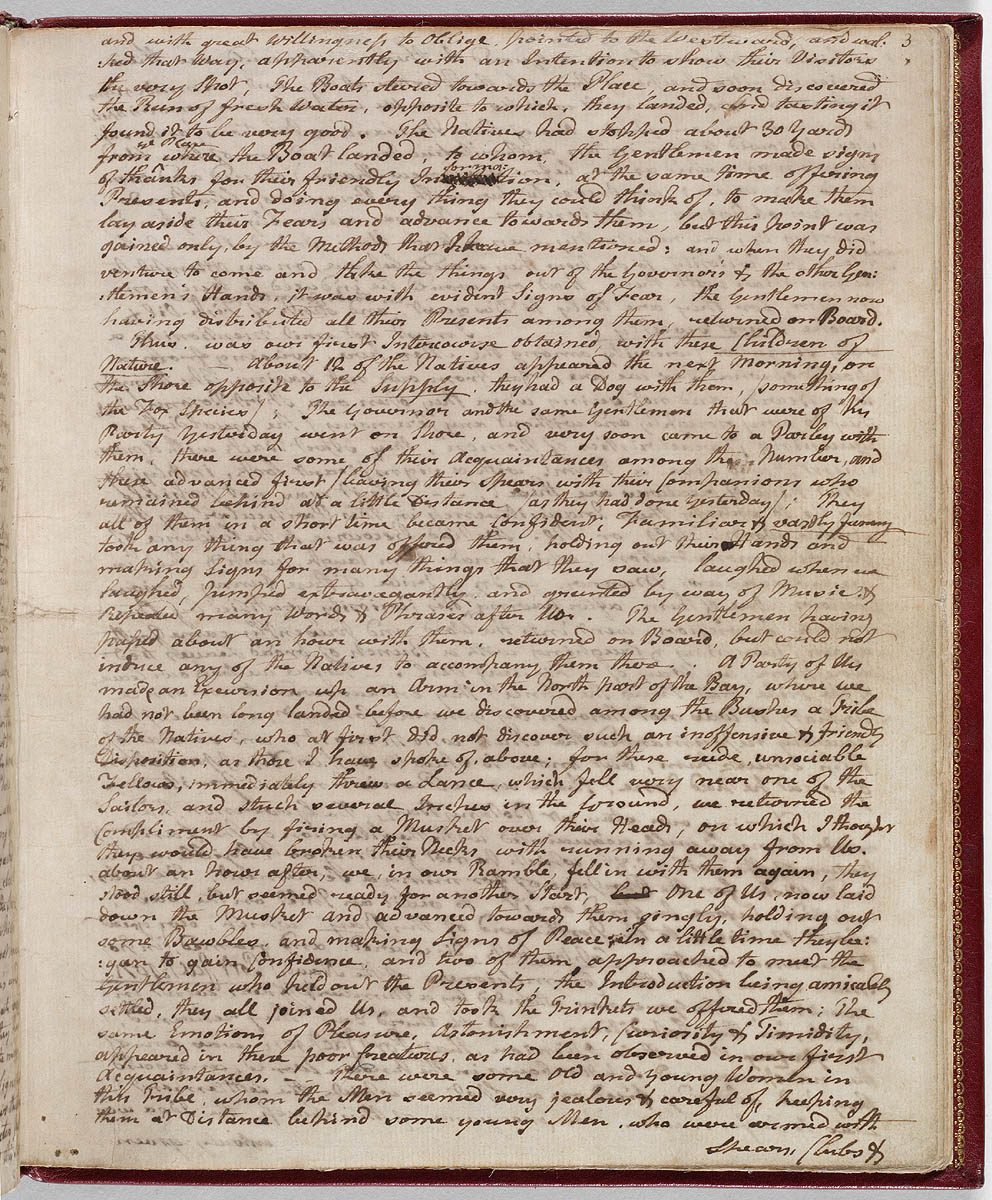 George Bouchier Worgan was probably born in 1757. He joined the Navy in 1775 and was appointed Surgeon on HMS Sirius in November 1786. Musically inclined, he brought his piano with him to the colony. Along with the crew of the Sirius, he left Australia to return to England in March 1791, arriving in April 1792. He had left his piano with Elizabeth Macarthur.
His journal is an account of the first five months of settlement in New South Wales, attached to a letter written to his brother Richard Worgan.
He married Mary Lawry, probably after his return from Australia, and they had two sons and a daughter. Both sons eventually migrated to Australia. Worgan died in March 1838, his death certificate says by apoplexy but there are other accounts which suggest suicide. (see Mollie Gillen, The founders of Australia; ADB)

and with great Willingness to Oblige, pointed to the Westward, and walked that Way, apparently with an Intention to show their Visitors the very Spot. The Boats steered towards the Place, and soon discovered the Run of fresh Water, opposite to which, they landed, and tasting it found it to be very good. The Natives had stopped about 30 Yards from ye Place where the Boat landed, to whom, the Gentlemen made signs of thanks for their friendly Information, at the same time offering Presents, and doing every thing they could think of, to make them lay aside their Fears and advance towards them, but this point was gained only, by the Methods that I have mentioned: and when they did venture to come and take the things out of the Governor's & the other Gentlemen's Hands, it was with evident Signs of Fear, the Gentlemen now having distributed all their Presents among them, returned on Board. Thus, was our first Intercourse obtained, with these Children of Nature.
- About 12 of the Natives appeared the next Morning, on the Shore opposite to the Supply, they had a Dog with them, (something of the Fox Species); The Governor and the same Gentlemen that were of his Party Yesterday went on Shore, and very soon came to a Parley with them, there were some of their Acquaintances among the Number, and these advanced first (leaving their Spears with their Companions who remained behind at a little Distance) as they had done Yesterday); They all of them in a short time became Confident, Familiar & vastly funny took any thing that was offered them, holding out their Hands and making Signs for many things that they saw, laughed when we laughed, jumped extravagantly, and grunted by way of Music, & Repeated many Words & Phrases after Us. The Gentlemen having passed about an hour with them, returned on Board, but could not induce any of the Natives to accompany them there.
A Party of Us made an Excursion up an Arm in the North part of the Bay, where we had not been long landed before we discovered among the Bushes a Tribe of the Natives, who at first did not discover such an inoffensive & friendly Disposition, as those I have spoke of, above; for these rude, unsociable Fellows, immediately threw a Lance, which fell very near one of the Sailors, and stuck several Inches in the Ground, we returned the Compliment by firing a Musket over their Heads, on which I thought they would have broken their Necks with running away from Us. about an hour after, we, in our Ramble, fell in with them again, they stood still, but seemed ready for another Start. One of Us, now laid down the Musket and advanced towards them singly, holding out some Bawbles, and making Signs of Peace; In a little time they began to gain Confidence, and two of them approached to meet the Gentlemen who held out the Presents, the Introduction being amicably settled, they all joined Us, and took the Trinkets we offered them; The same Emotions of Pleasure, Astonishment, Curiosity & Timidity, appeared in these poor Creatures, as had been observed in our first Acquaintances
-There were some Old and young Women in this Tribe, whom the Men seemed very jealous & careful of, keeping them at Distance behind some young Men, who were armed with Spears, Clubs &