The Ask a Librarian Serivce will be unavailable on Monday 6 February between 8 and 10 am for a scheduled upgrade. 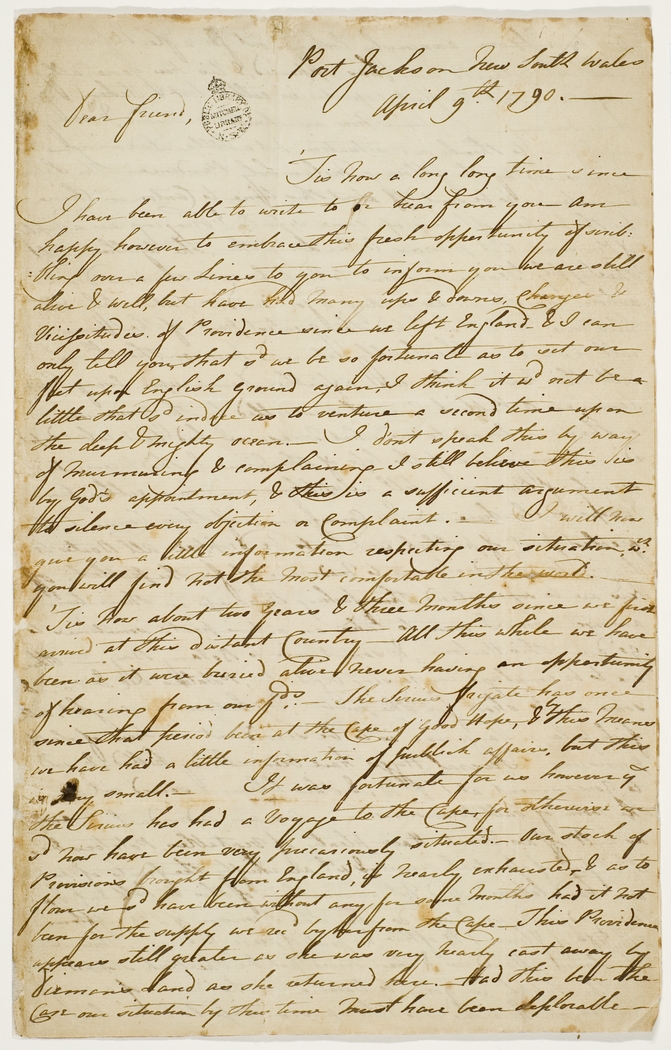 Port Jackson - New South Wales
April 9th, 1790. -
Dear friend,
Tis now a long long time since I have been able to write to or hear from you. - Am happy however to embrace this fresh opportunity of scribbling over a few Lines to you to inform you we are still alive & well, but have had many ups & downs, Changes & Visissitudes of Providence since we left England - & I can only tell you, that sd. we be so fortunate as to set out feet upon English Ground again, I think it wd. not be a little that sd. induce us to venture a second time upon the deep & mighty ocean. I dont speak this by way of murmuring & complaining - I still believe this is God's appointment, & this is a sufficient argument to silence every objection or Complaint. - I will now give you a little information respecting our situation, wch, you will find not the most comfortable in the world. -
Tis now about two Years and three Months since we first arrived at this distant Country - All this while we have been as it were buried alive - never having an opportunity of hearing from our fds. - The Sirius frigate has once since that period been at the Cape of Good Hope, & this means we have had a little information of publick affairs, but this is very small.
It was fortunate for us however that the Sirius has had a Voyage to the Cape, for otherwise we sd. have been very precariously situated. - Our stock of Provisions brought from England, is nearly exhausted, & as to flour - we sd. have been without any for some Months had it not been for the supply we recd. by her from the Cape - This Providence appears still greater as she was very nearly cast away by Dieman's Land as she returned here. - Had this been the Case our situation here must have been deplorable. –