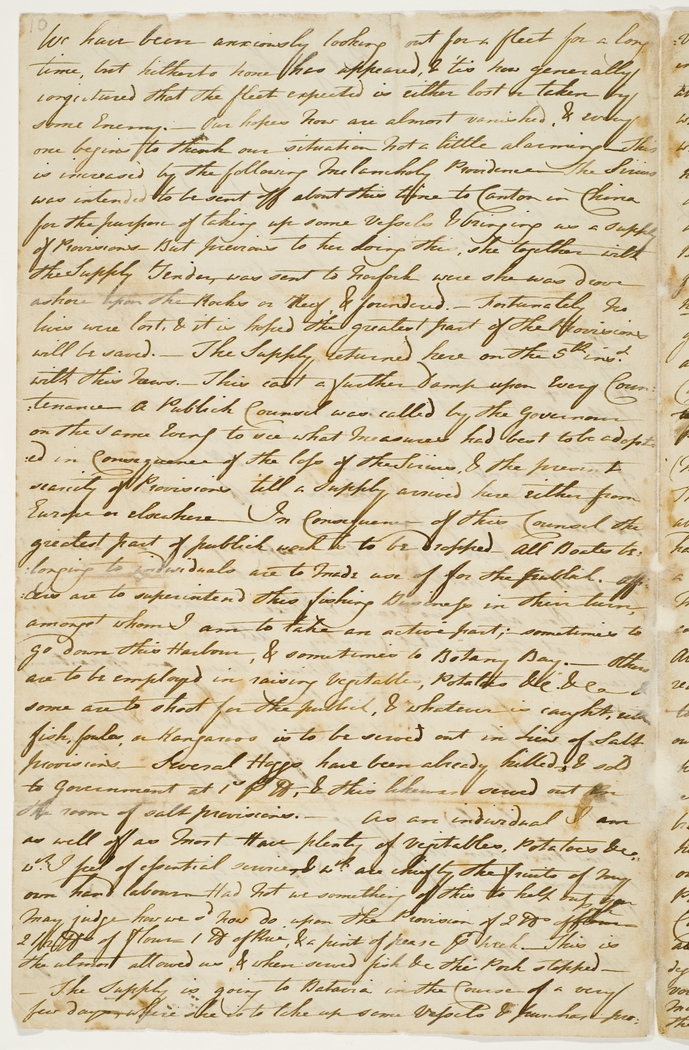 We have been anxiously looking out for a fleet for a long time, but hitherto none has appeared, & 'tis now generally conjectured that the fleet expected is either lost or taken by some Enemy. - Our hopes now are almost vanished, & every one begins to think our situation not a little alarming. - This is increased by the following Melancholy Providence - The Sirius was intended to be sent off about this time to Canton in China for the purpose of taking up some Vessels & bringing us a supply of Provisions - But previous to her doing this, she together with the Supply Tender, was sent to Norfolk were she was drove ashore upon the Rocks or Reef, & foundered. - Fortunately no lives were lost, & it is hoped the greatest part of the Provisions will be saved. - The Supply returned here on the 5th inst. with this News. - This cast a further Damp upon every Countenance. - A Publick Council was called by the Governor on the same eveng to see what measures had best to be adopted in consequence of the loss of the Sirius, & the present scarcity of Provisions 'till a supply arrived here either from Europe or elsewhere. - In Consequence of this Council the greatest part of publick work is to be dropped. - All Boats belonging to individuals are to made use of for the publick. Officers are to superintend this fishing Business in their turn, amongst whom I am to take an active part; sometimes to go down this Harbour, & sometimes to Botany Bay. - Others are to employed in raising Vegetables, Potatoes &c, &c - & some are to shoot for the publick, & whatever is caught, either Fish, fowles, or Kangaroo is to be served out in lieu of Salt provisions. - Several Hoggs have been already killed, & sold to Government at 1d. per lb , & this likewise served out in the room of salt provisions. - As an individual I am as well off as Most. Have plenty of Vegetables, Potatoes, &c., wch. I feel of essential service, & wch. are chiefly the fruits of my own hard labour. - Had not we something of this to help out , you may judge how we sd. now do upon the Pension of 2 lbs. of Pork - 2½ lbs. of flour - 1 lb. Rice - & a pints of pease per Week. - This is the utmost allowed us, & when served fish &c the Pork stopped, -
The Supply is going to Batavia in the course of a very few days, where she is to take up some Vessels & purchase pro[visions]