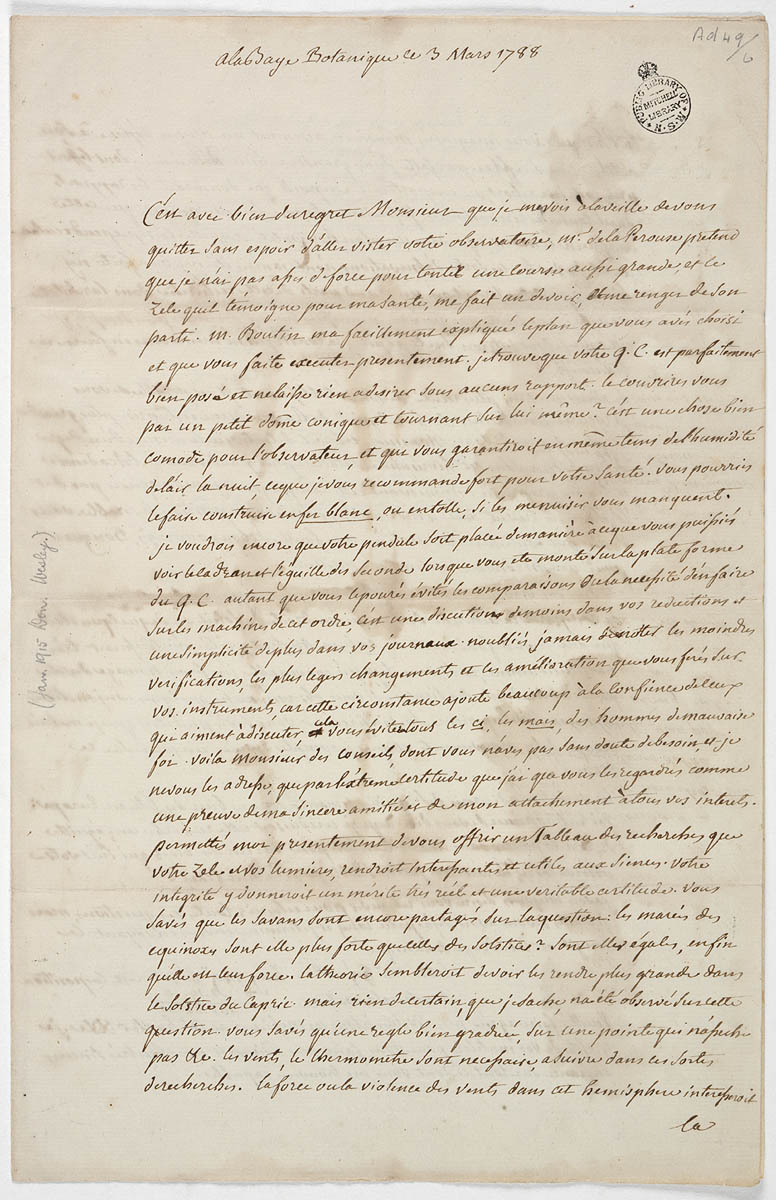 It is with much regret that I see myself on the point of leaving you without any hope of going to visit your observatory. Mr de La Perouse claims that I am too weak to undertake such a long expedition, and the zeal he shows for my health makes it my duty to agree with him. M. Boutin [Charles Fantin de Boutin, a senior officer on La Boussole] has easily explained to me the plan you have chosen and that you are currently having carried out. I find that your q.c.[quart de cercle, i.e. quadrant] is perfectly well placed and leaves nothing to be desired from any point of view. Will you cover it with a little cone-shaped dome which turns on itself? This is something very handy for the observer, and would also protect you from the humidity of the air at night, which I would strongly recommend to you for the sake of your health. You could have it constructed in tin or iron sheeting if you have a shortage of carpenters.

I would also like your clock to be located in a such a way that you can see the face and the second hand when you stand on the platform of the q.c. As far as possible you should avoid comparisons or the need to make comparisons on machines of this order ? this will mean less discussion about your reductions and greater simplicity in your journals. Never forget to note the slightest verifications, the slightest changes and any improvements to your instruments, as such a circumstance will add confidence in those who like to argue, it will save you all those "ifs" and "buts" of disputatious people. This, Sir, is advice you doubtless do not need, and I am only offering it to you because of the absolute certainty I have that you will see it as a proof of my sincerest friendship for you and my concern for all your interests.

Permit me now to offer you a picture of the research topics which your enthusiasm and insights would make interesting and useful to science. Your integrity would bring a very special quality and true certainty. You are aware that scientists are still divided on the question: are the tides at the Equinox more powerful than the tides at the Solstice? Are they equal, or what is their force? Theory would seem to render them stronger at the solstice of Capricorn, but as far as I know nothing definitive has been observed on this question. You know that a well graduated rule [= tide pole] on a headland which does not dry out etc. the winds, and thermometers are necessary to follow in this sort of research. The strength or violence of the winds in this hemisphere would be of interest