Due to essential maintenance, access to some online services including eresources and the viewing of digitised items will be temporarily unavailable between 8 pm and 10.30 pm AEDT on Wednesday, 19 February 2020. We apologise for any inconvenience caused. 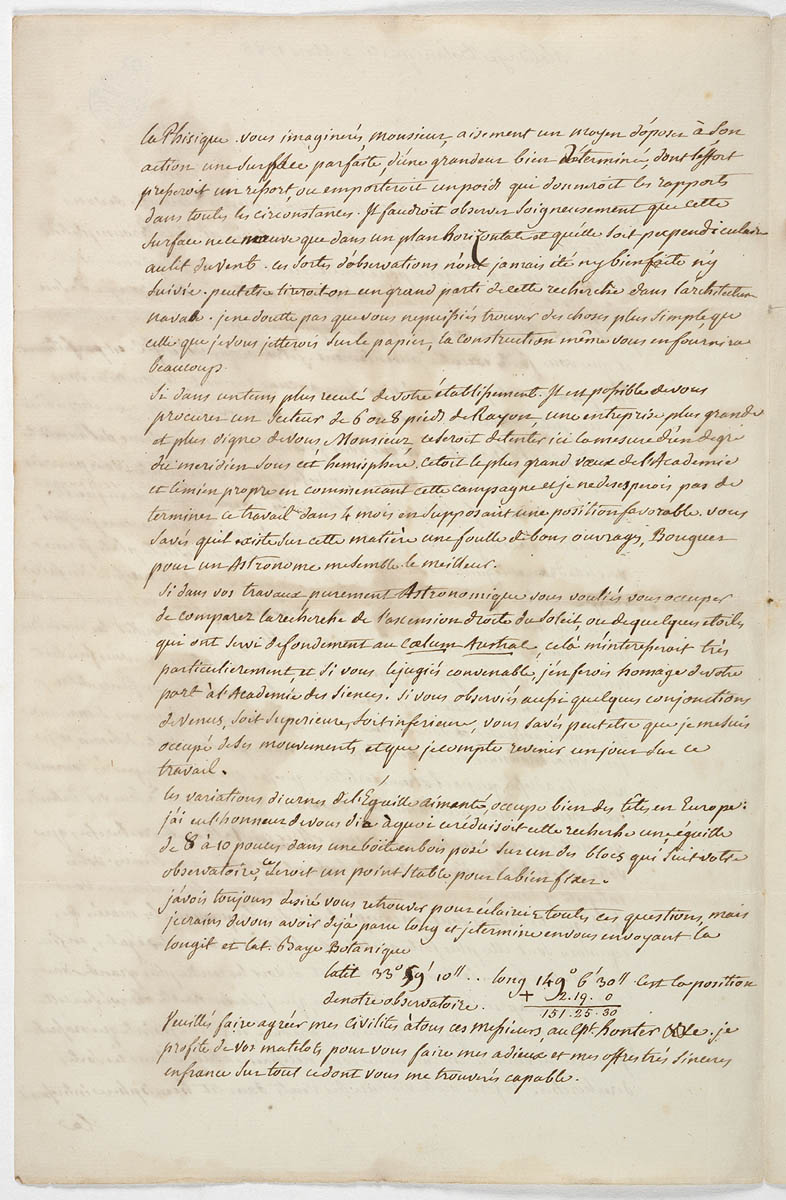 to Physics. You can easily imagine a means, Sir, to oppose to its action a perfect surface of a clearly determined size, whose force would press a spring or would move a weight which would give the relationships in all circumstances. It would be necessary to ensure carefully that this surface moves only on a horizontal plane and that it be perpendicular to the lie of the wind. These sorts of observations have never been made properly nor have they been followed up. It is possible that great benefits to naval design would result from such research. I have no doubt that you could find much simpler things than the ones I would put on paper ? your very construction will provide you with some.

If at some future stage in the development of your establishment it were possible for you to procure a sector with a radius of 6 to 8 feet, a grander enterprise, and one more worthy of your merit, would be to attempt to measure a degree of the meridian under this hemisphere. That was the greatest wish of the Academy and also my own at the outset of this campaign ? I did not despair of completing this task within 4 months, provided that the position was favourable. You know that there is a host of good books on this topic, Bouguer's for an Astronomer seems to me the best. [Pierre Bouguer, 1698-1758, author of La Figure de la terre, déterminée par les observations de Messieurs Bouguer et de La Condamine, [...] envoyés par ordre du Roy au Pérou pour observer aux environs de l'équateur [...], Paris: C.-A. Jombert, 1749]

If in your purely astronomical inquiries you would devote time to the comparative research of the right ascension of the Sun and some of the stars which provide the setting of cœlum Australis, that would be of particular interest to me, and if you judged it appropriate, I would offer it on your behalf to the Academy of Sciences. If you were to observe some of Venus's conjunctions, either superior or inferior, you know perhaps that I have studied its movements and intend to return to this research one day.

The daily variations of the magnetic needle preoccupies many minds in Europe. I have had the honour of telling you what this research amounted to. An 8 or 10 inch needle in a wooden box safely placed on one of the blocks which follow your observatory would provide a stable point to fix it firmly.

I have always wished to meet with you again to clarify these questions but I fear that I have been too lengthy already and I therefore conclude by sending you the longitude and latitude at Botany Bay:

Please present my compliments to all your gentlemen and to Cpt Hunter. I profit from the presence of your seamen to send you my farewells and my very sincere offers of service in France for everything you would find me capable of.