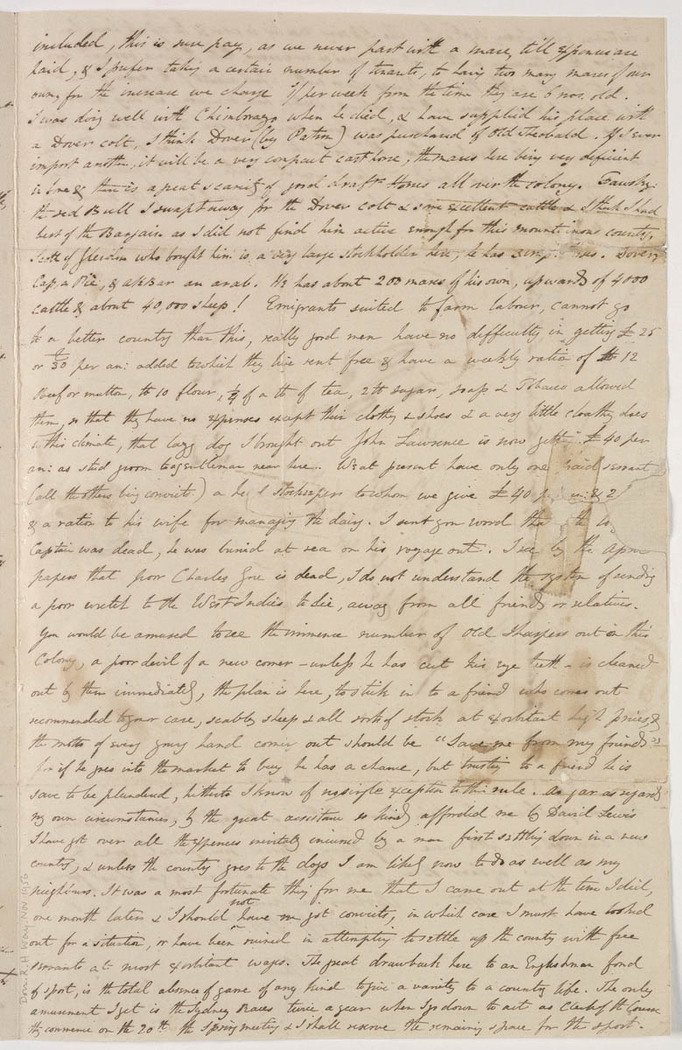 by Benjamin Way
Transcript:
included, this is [sure] pay, as we never part with a mare till expenses are paid, & I prefer taking a number of tenants, to having too many mares of our own, for the increase we charge 1/ per week from the time they are 6 months old. I was doing well with [Chinbrago] when he died & have supplied his place with a Dover colt, I think Dover (by Patron) was purchased of old Theobald. If I ever import another it will be a very compact [cart] horse the mares here being very deficient in [bone?] & there is a great scarcity of good draft horses all over the colony. [Fawdry?] the red bull I swapt away for the Dover colt and some excellent cattle and I think I had the best of the bargain as I did not find him active enough for this mountainous country. Scott of Glendon who bought him is a very large stockholder here, he has [3] [imp.] horses, Dover, Cap, a Pie, and [Akbar] an arab. He has about 200 mares of his own, upwards of 400 cattle and about 40,000 sheep! Emigrants suited to farm labour cannot go for a better country than this, really good men have no difficulty in getting £25 or 30 per an: added to which they live rent free & have a weekly ration of 12lbs beef or mutton, 10lbs flour, ¼lb of tea, 2lbs sugar, soap & tobacco allowed them, so that they have no expenses except their clothes and shoes & very little cloathing (sic) does in this climate, that lazy dog I brought out John Lawrence is now getting £40 per an: as stud groom to a gentleman near here. We at present have only one paid servant (all the others being convicts) a head stockpers. to whom we give £40 an: & 2 [ ] & a ration to his wife for managing the dairy. I sent word that the [text missing] Captain was dead, he was buried at sea on his voyage out I see by the April papers that poor Charles [Jones] is dead, I do not understand the system of sending a poor wretch to the West Indies to die way from all friends and relatives. You would be amused to see the immense number of old sharpies out in this colony, a poor devil of a new comer - unless he has cut his eye teeth - is cleaned out by them immediately, the plan is here, to stick in to a friend who comes out recommended to your case, scabby sheep & all sorts of stock at exorbitant high prices, & the motto of every young hand coming out should be 'Save me from my friends' for if he goes into the market to buy he has a chance, but trusting to a friend he is sure to be plundered, hitherto I know of no single exception to this rule. As far as regards my own circumstances, by the great assistance so kindly afforded me by David Lewis I have got over all the expenses inevitably incurred by a man first settling down in a new country, & unless the country goes to the dogs I am likely now to do as well as my neighbours. It was a most fortunate thing for me that I came out at the time I did, one month later and I should not have got convicts, in which case I must have looked out for a situation, or have been ruined in attempting to settle up the country with free servants at most exorbitant wages. The great drawback here to an Englishman fond of sport is the total absence of game of any kind to give variety to a country life. The only amusement I get is the Sydney Races twice a year when I go down to act as clerk of the course. They commence on the 20th the Spring meeting & I shall reserve the remaining space for the sport.
Call Number:
Aw 120
Published date:
11 & 24 September 1842