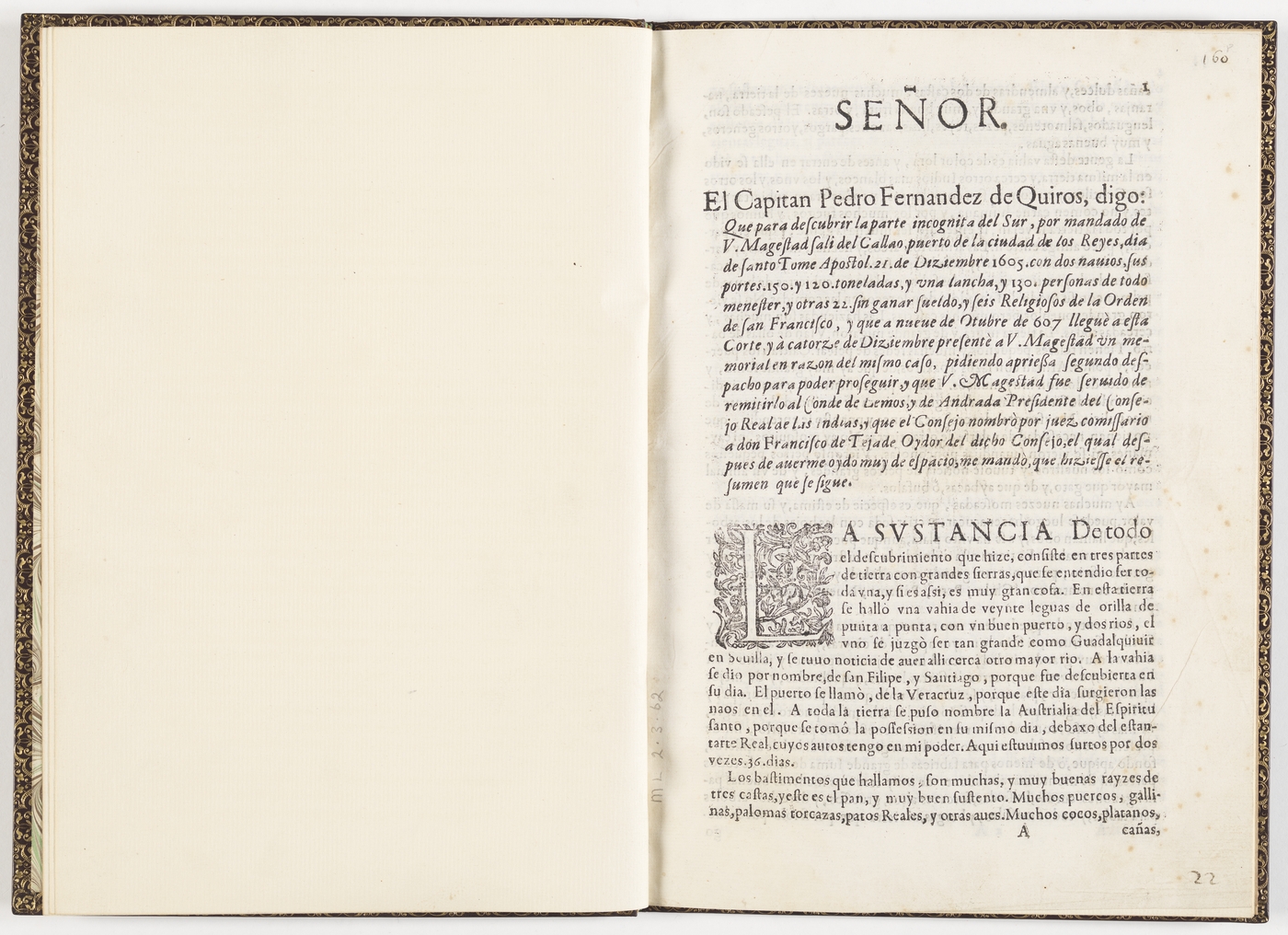 Second in the series of fourteen known Quirós' presentation memorials. It describes his 1605-1606 expedition in search of Terra Australis, gives a short description of his discoveries and sets forth requirements to form a settlement in the new land. Quirós wrote about fifty memorials addressed to the King Philip III of Spain describing the wonders of the lands he had discovered and requesting Royal support to organize a new expedition to the Southern hemisphere. The majority of them were manuscripts, but fourteen were printed between 1607 and 1614 at Quirós' expense for presentation at the Council of the Indies. Circulation of all memorials was restricted to the King, ministers and Councils of State, of War and the Indies. When it was learnt in 1610 he was distributing them beyond the court, the King ordered all memorials to be recalled. The Eighth Memorial 'escaped' the Spanish borders and was translated into various languages. These so-called "presentation memorials" - to be distinguished from later derivative printings which appeared throughout Europe - are among the most valuable of all printed Australiana.

My Lord I, Captain Pedro Fernández de Quiy explorationós, say: that in order to discover the unknown Southern hemisphere, as ordered by Y. Majesty, I set sail from Callao, the City of Kings’ port, on the day of St. Tome Apostle, December 21st, 1605, with two ships (150 and 120 tonnes), a landing craft, 130 people for all trades and another 22 without pay, and 6 monks from the Order of St. Francis. On October 9th, 1607, I arrived at this Court, and on December 14th, I submitted a memorial to Y. Majesty about the same trip requesting from Y. Majesty a new hasty dispatch to continue with the mission to be served to the Count of Lemos and Andrada, President of the Royal Council of the Indies. The Council appointed Francisco de Tejada as commissioner, Judge from said Council, who after listening to me carefully, instructed me to write the following summary. The substance of what I discovered consists of three parts of land with high mountain ranges, which are understood to be part of one great land mass, where we found a harbour that was twenty leagueslong from head to head, with a good port and two rivers. One of them was considered to be as big as the Guadalquivir in Seville, and we had news that there is a larger river nearby. The harbour was named San Filipe (St. Philip) and Santiago (James), because it was discovered on his day. The port was called Veracruz, for it was on that day that the ships sailed in. The whole land mass was called Australia of the Holy Spirit because that was the day it was taken possession of, under the Royal Standard whose edicts I have with me. We stayed here for thirty‐six days. We found several good supplies, and very good roots of three kinds which are eaten as very nutritious bread, many pigs, hens, wood pigeons and other birds, many coconuts, bananas, sweet canes,

I remind Y.M. that a good, fulfilled and very timely dispatch is of the essence to start such a great mission, that true help will secure what was done, and that with just laws and holy institutions it is possible to open a brief and secure pathway to create a Republic in those territories (which can be called concerted) and that it will be created by real and substantial men, so that they can think ahead and leave their secure possessions here in order to populate, pacify, defend and sustain others’ territories, great favours and honours. Generosity and freedom are very necessary, based on the granting of land and natives to individual settlers, all the while preventing their owners from saying that they are masters of Indians, for it is possible to give every one of them their due by banishing forced personal service and allowing voluntary service. With all these favours, Y.M. will earn everybody’s goodwill, both Spaniards and Indians, in a way that later it may be said that such a great part of the world was acquired for such a small price, securing both the spiritual and temporal good, as many as there are and can be in this mission, on which there is so much to say, to consider and to organise, rather than otherwise. Without much objection, it should be said that this mission will not exist with all that has not been believed in or helped for so many years and that Our Lord, to whom we owe our thanks, removed it from Satan’s claws. For all of that, and with the utmost humility and trust, I beg Y.M. to organise my dispatch to sail in the first galleons, and to hasten the settlement of such great and worthy territoriesthat Y.M. sent me to discover. I remind Y.M. that lives are short and that time flies, that much can be lost in riches, and that a loyal, faithful, truthful and diligent man who understands what I request is highly worthy and cannot be found every day, is even more worthy if he has nothing to hide, loves the mission, and can suffer, persist and seek justice. There is a handwritten note on the left margin of the page: "(...) and of service of the relationship of the new discovery and things that the ( ...)for its population."