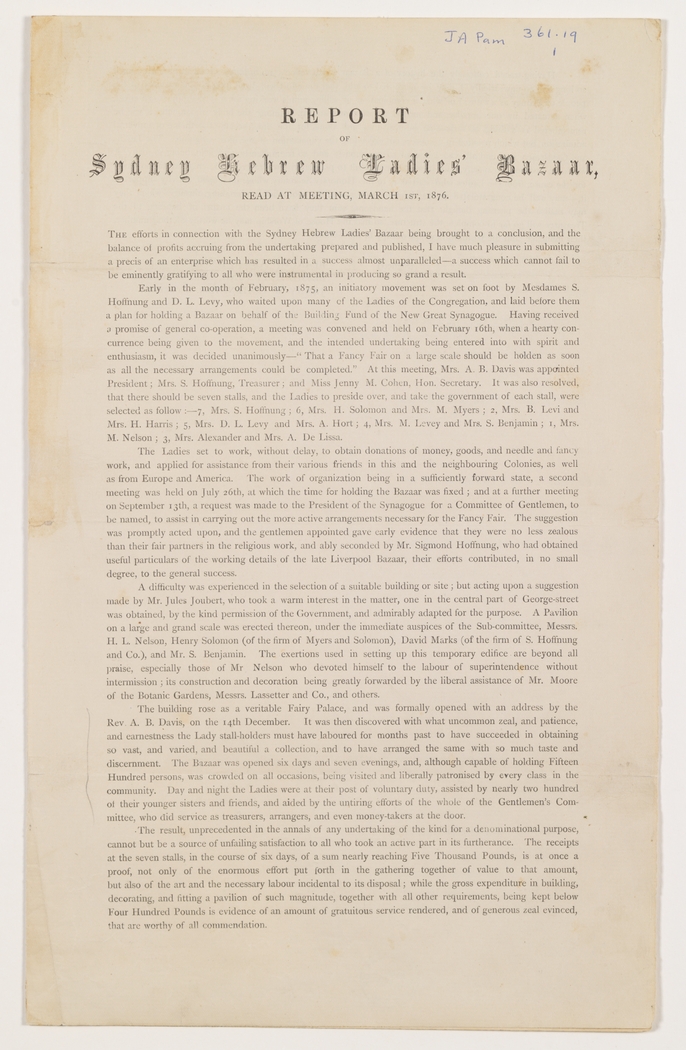 REPORT of Sydney Hebrew Ladies' Bazaar, READ AT MEETING, MARCH 1ST, 1876.
The efforts in connection with the Sydney Hebrew Ladies' Bazaar being brought to a conclusion, and the balance of profits accruing from the undertaking prepared and published, I have much pleasure in submitting a precis of an enterprise which has resulted in a success almost unparalelled; a success which cannot fail to be eminently gratifying to all who were instrumental in producing so grand a result.

Early in the month of February, 1875, an initiatory movement was set on foot by Mesdames S. Hoffnung and D. L. Levy, who waited upon many of the ladies of the congregation and laid before them a plan for holding a bazaar on behalf the building fund of the New Great Synagogue. Having received a promise of general co-operation, a meeting was convened and held on February 16th, when a hearty concurrence being given to the movement, and the intended undertaking being entered into with spirit and enthusiasm, it was declared unanimously — "That a Fancy Fair on a large scale, should be holden as soon as all the necessary arrangements could be completed." At this meeting, Mrs. A. B. Davis was appointed President; Mrs. S. Hoffnung, Treasurer, and Miss Jenny M. Cohen, Hon. Secretary. It was also resolved, that there should be seven stalls, and the ladies to preside over and take the government of each stall were selected as follow:— 7, Mrs. S. Hoffung; 6, Mrs. H. Solomon and Mrs. M. Myers; 9, Mrs. B. Levi and Mrs. H. Harris; 5, Mrs. D. L. Levy and Mrs. A. Hort, 4, Mrs. M. Levey and Mrs. S. Benjamin, 1, Mrs. M. Nelson; 3, Mrs. Alexander and Mrs A. De Lissa.

The Ladies set to work, without delay, to obtain donations of money, goods, and needle and fancy work, and applied for assistance from their various friends in this and the neighbouring Colonies, as well as from Europe and America. The work of organization being in a sufficiently forward state, a second meeting was held on July 26th, at which the time for holding the Bazaar was fixed; and at a further meeting on September 13th, a request was made to the President of the Synagogue for a Committee of Gentlemen, to be named to assist in carrying out the more active arrangements necessary for the Fancy Fair. The suggestion was promptly acted upon, and the gentlemen appointed gave early evidence that they were no less zealous than their fair partners in the religious work, and ably seconded by Mr Sigmond Hoffnung, who had obtained useful particulars of the working details of the  late Liverpool Bazaar, their efforts contributed, in no small degree to the general success.

A difficulty was experienced in the selection of a suitable building or site; but acting upon the suggestion made by Mr. Jules Joubert, who took a warm interest in the matter, one in the central part of George-street was obtained by the kind permission of the Government, and admirably adapted for the purpose. A Pavilion on a large and grand scale was erected thereon, under the immediate auspices of the Sub-committee, Messrs. H. L. Nelson, Henry  Solomon (of the firm of Myers and Solomon), David Marks (of the firm of S. Hoffnung and Co.), and Mr. S. Benjamin. The exertions used in setting up this temporary edifice are beyond all praise, especially those of Mr. Nelson who devoted himself to the labour of supenitendence without intermission; its construction and decoration being greatly forwarded by the liberal assistance of Mr. Moore of the Botanic Gardens, Messrs. Lassetter and Co., and others.

The building rose as a veritable Fairy Palace, and was formally opened with an address by the Rev. A. B. Davis, on the 14th December. It was then discovered with what uncommon zeal and patience, and earnestness the Lady stallholders must have laboured for months past to have succeeded in obtaining so vast, and varied, and beautiful a collection, and to have arranged the same with so much taste and discernment. The Bazaar was opened six days and seven evenings, and, a though capable of holding Fifteen Hundred persons, was crowded on all occasions, being visited and liberally patronised by every class in the community. Day and night the ladies were at their post of voluntary duty, assisted by nearly 200 of their younger sisters and friends and aided by the untiring efforts of the whole ot the Gentlemen's Committee, who did service as treasurers, arrangers, and even money-takers at the door.

The result, unprecedented in the annals of any undertaking of the kind for a denominational purpose, cannot but be a source of unfailing satisfaction to all who took an active part in its furtherance. The receipts at the seven stalls in the course of six days, of a sum nearly reaching Five Thousand Pounds, is at once a proof, not only of the enormous effort put forth in the gathering together of value to that amount, but also of the art and the necessary labour incidental to its disposal; while the gross expenditure in building, decorating, and fitting a pavilion of such magnitude, together with all other requirements, being kept below Four Hundred Pounds, is evidence of an amount of gratuitous service indeed, and of generous zeal evinced, that are worthy of all commendation.