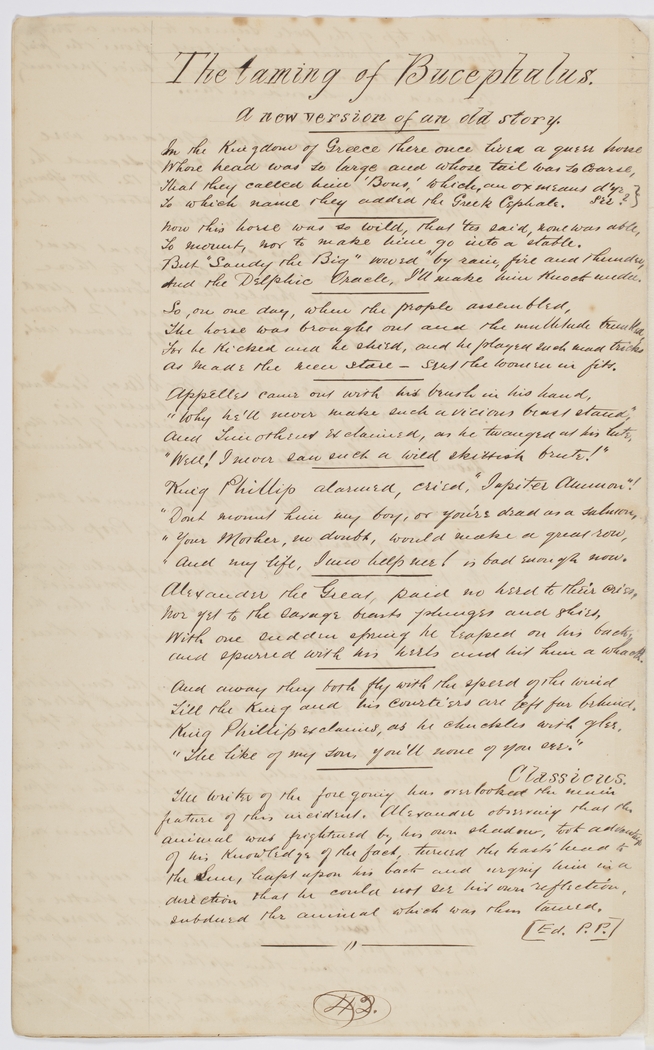 The taming of Bucephalus
A new version of an old story.
In the Kingdom of Greece there once lived a queer horse
Whose head was so large and whose tail was so coarse,
That they called him "Bous", which, an ox means d’yr see?
To which name they added the Greek Cephale.
Now this horse was so wild, that ‘tis said, none was able,
To mount, nor to make him go into a stable.
But "Sandy the Big" vowed by rain, fire and thunder,
And the Delphic Oracle, I’ll make him knock under.
So, on one day, when the people assembled,
The horse was brought out and the multitude trembled,
For he kicked and he shied, and he played such mad tricks,
As made the men stare – sent the women in fits.
Appelles came out with his brush in his hand,
"Why he’ll never make such a vicious beast stand",
And [indecipherable] exclaimed, as he twanged at his lute,
"Well! I never saw such a wild skittish brute!"
King Phillip alarmed, cried, "Jupiter Ammon"!
"Dont mount him my boy, or you’re dead as a salmon,
"You Mother, no doubt, would make a great row,
"And my life, Jesu help me! Is bad enough now.
Alexander the Great, paid no heed to their cries,
Nor yet to the savage beasts plunges and shies,
With one sudden spring he leaped on his back,
And spurred with his heels and hit him a whack.
And away they both fly with the speed of the wind
Till the King and his courtiers are left far behind,
King Phillip exclaims as he chuckles with glee,
"The like of my son, you’ll none of you see."
Classicus
The writer of the foregoing has overlooked the main feature of this incident. Alexander observing that the animal was frightened by his own shadow, took advantage of his knowledge of the fact, turned the hack’s head to the sun, leapt upon his back and urging him in a direction that he could not see his own reflection, subdued the animal which was then tamed.
[Ed. P.P.]