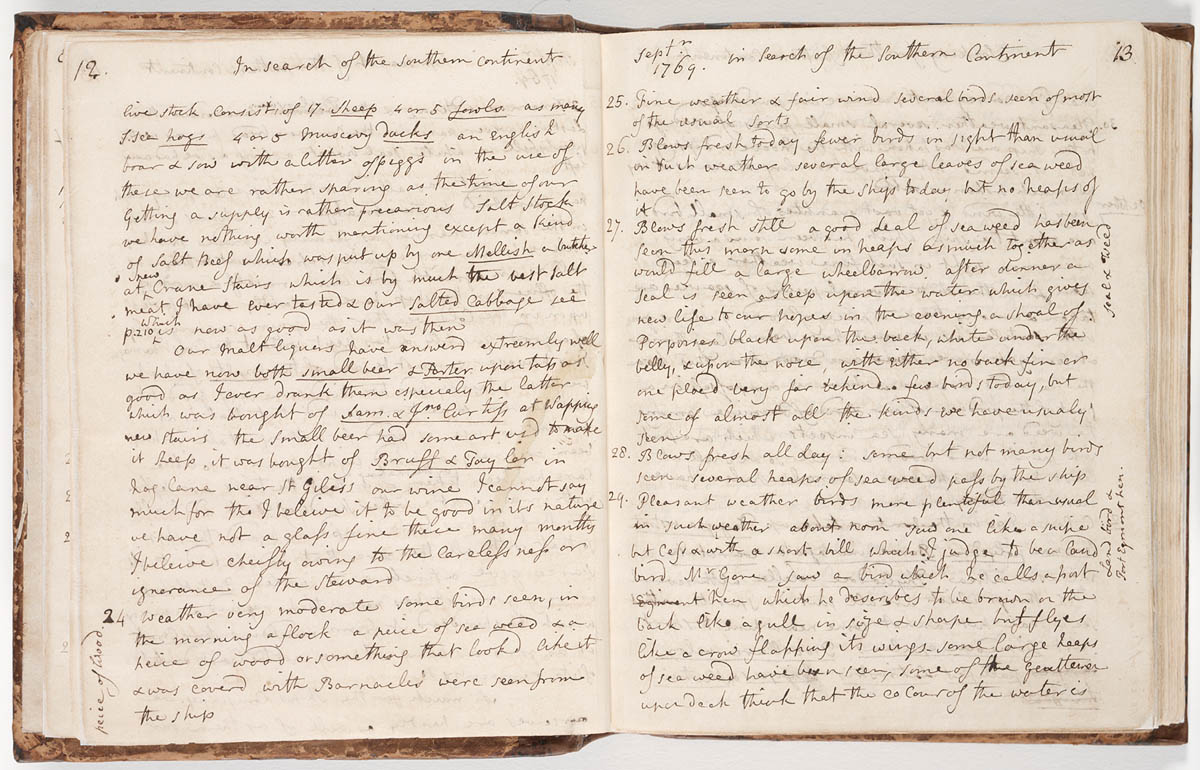 In Search of the Southern Continent

live stock consists of 17 Sheep, 4 or 5 fowls, as many S. Sea hogs, 4 or 5 Muscovy ducks, an English boar and sow with a litter of piggs; in the use of these we are rather sparing as the time of our Getting a supply is rather precarious. Salt Stock we have nothing worth mentioning except a kind of Salt Beef which was put up by one Mellish a butcher at New Crane Stairs, which is by much the best salt meat I have ever tasted, and Our Salted Cabbage, see p.210 which is now as good as it was then.

Our Malt liquors have answerd extreemly well: we have now both small beer and Porter upon tap as good as I ever drank them, especialy the latter which was bought of Sam. & Jno. Curtiss at Wapping New Stairs. The Small beer had some art usd to make it keep, it was bought of Bruff & Taylor in Hog Lane near St Giles's. Our wine I cannot say much for tho I beleive it to be good in its nature, we have not a glass fine these many months I beleive cheifly owing to the Carelessness or ignorance of the Steward.

24. Weather very moderate: some birds seen, in the morning a flock. A peice of sea weed and a peice of wood or something that lookd like it and was coverd with Barnacles were seen from the ship.

25. Fine weather and fair wind: several birds seen of most of the usual sorts.

26. Blows fresh today: fewer birds in sight than usual in such weather. Several large leaves of sea weed have been seen to go by the Ship today but no heaps of it.

27. Blows fresh still. A good deal of sea weed has been seen this morn some in heaps as much together as would fill a large wheelbarrow; after dinner a Seal is seen asleep upon the water which gives new life to our hopes. In the evening a shoal of Porpoises black upon the back, white under the belly and upon the nose, with either no back fin or one placd very far behind. Few birds today, but some of almost all the kinds we have usualy seen.

28. Blows fresh all day: some but not many birds seen, several heaps of sea weed pass by the ship.

29. Pleasant weather: birds more plentiful than usual in such weather; about noon saw one like a snipe but less and with a short bill which I judge to be a land bird. Mr Gore saw a bird which he calls a Port Egmont hen which he describes to be brown on the back, like a gull in size and shape, but flyes like a crow flapping its wings. Some large heaps of sea weed have been seen; some of the gentlemen upon deck think that the colour of the water is