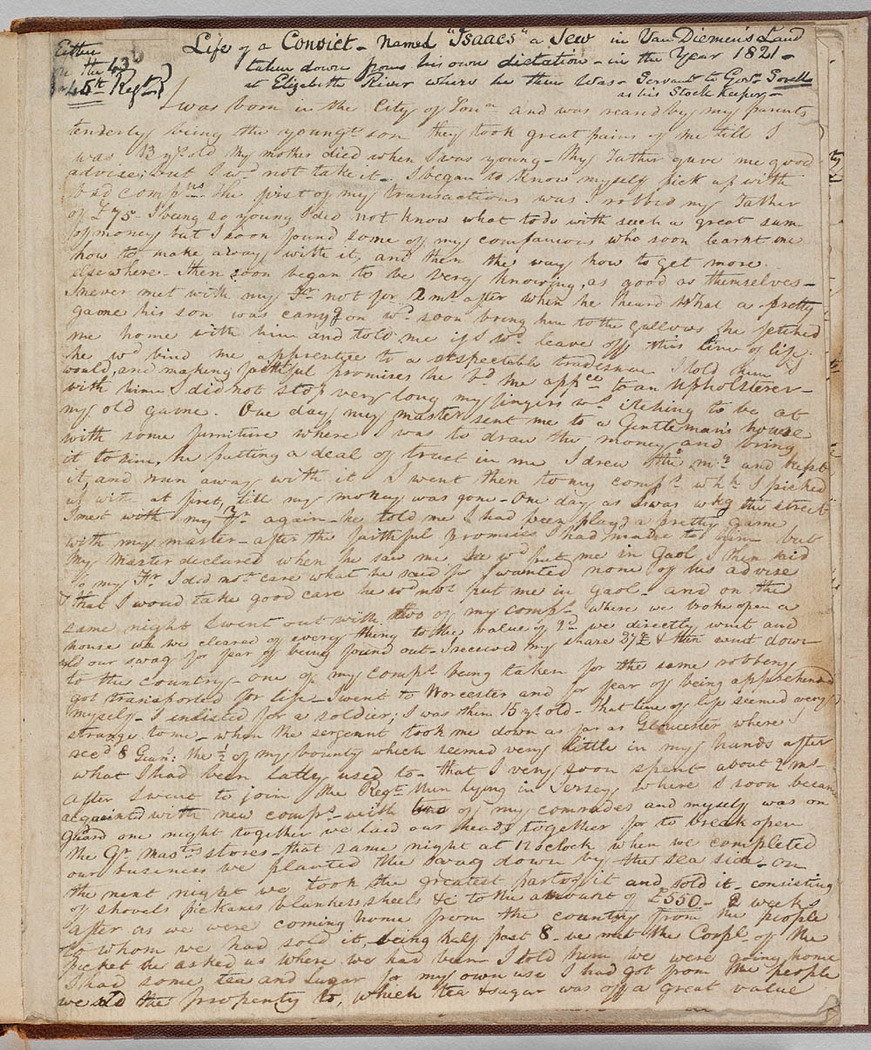 Thomas Scott - 'Life of a Convict named "Isaacs" a Jew in Van Diemen's Land taken down from his own dictation in the year 1821 at Elizabeth River where he then was - Servant to Govr. Sorell as his Stock Keeper' - p11821

I was born in the city of Lond. and was reared by my parents tenderly being
their youngr Son they took great pains with me till I was 13 yrs old. My
Mother died when I was young. My Father gave me good advise; but I did not
take it. I began to know myself pick up with bad compns

The first of my transactions was I robbed my father of £75 - I being so young I
did not what to do with such a great sum of money but I soon found some of my
companions who soon learnt me how to make away with it, and then the way to
get more elsewhere - then soon began to be very knowing, as good as themselves.
I never met with my Fr not for 12 mths After when he heard what a pretty game
his son was carryg wd soon bring him to the gallows he fetched me home and
told me if I wd leave off this time of life he wd bind me apprentice to a
respectable tradesman I told him I would and making faithful promises he bd
me appce to an upholsterer -- with him I did not stop very long my fingers
wd itching to be at my old game.

One day my Master sent me to a Gentleman's house with some furniture where
I was to draw the money and bring it to him, he putting a deal of trust in me
I drew this my I kept it and ran away with it

I wnt to my comps who I picked up with at first till my money was gone -
one day as I was wkg the street I met with my Br again he told me I had been
playg a pretty game with my master after faithful promises I had made to
him but my master declared when he saw me He wd put me in Goal I then said
to me Fr I did not care what he said for I wanted none of his advise and I
woud take good care he wd not put me in Goal and on the same night I went
out with two of my comps where we broke open a house wh we cleared off
everything to the value of [£90?] we directly went and sold our swag for
fear of being found out - I received my share of 27£ & then went down to the
country - one of my comps being taken for the same robbery got transported
for life.

I went to Worcester and for fear of being apprehended myself I enlisted for a
soldier; I was then 15 yrs old. That time of life seemed very strange to me –
when the Sergeant took me down as far as Gloucester where I secd. 8 Gun;
then 1/2 of my bounty which seemed very little in my hands after what I had
been lately used to that I very soon spent about 2 mths after I went to join the
Regt then lying in Jersey where I soon became acquainted with new comps
with two of my comrades and myself was on guard one night together we laid
our heads together to break open the Gr. Mastrs stores that same night at 12
o'clock when we completed our business we planted the swag down by the sea
side - on the next night we took the greatest part of it and sold it -- consisting
of shovels pickaxes blankets sheets etc, to the amount of £550 - 2 weeks after
as we were coming home from the country from the people to whom we had
sold it, being half past 8 - we met the Corpl of the picket he asked us where
we had been I told him we were going home I had some tea and sugar for
my own use I had got from the people we had sold the property to, which tea
and sugar was off a great value