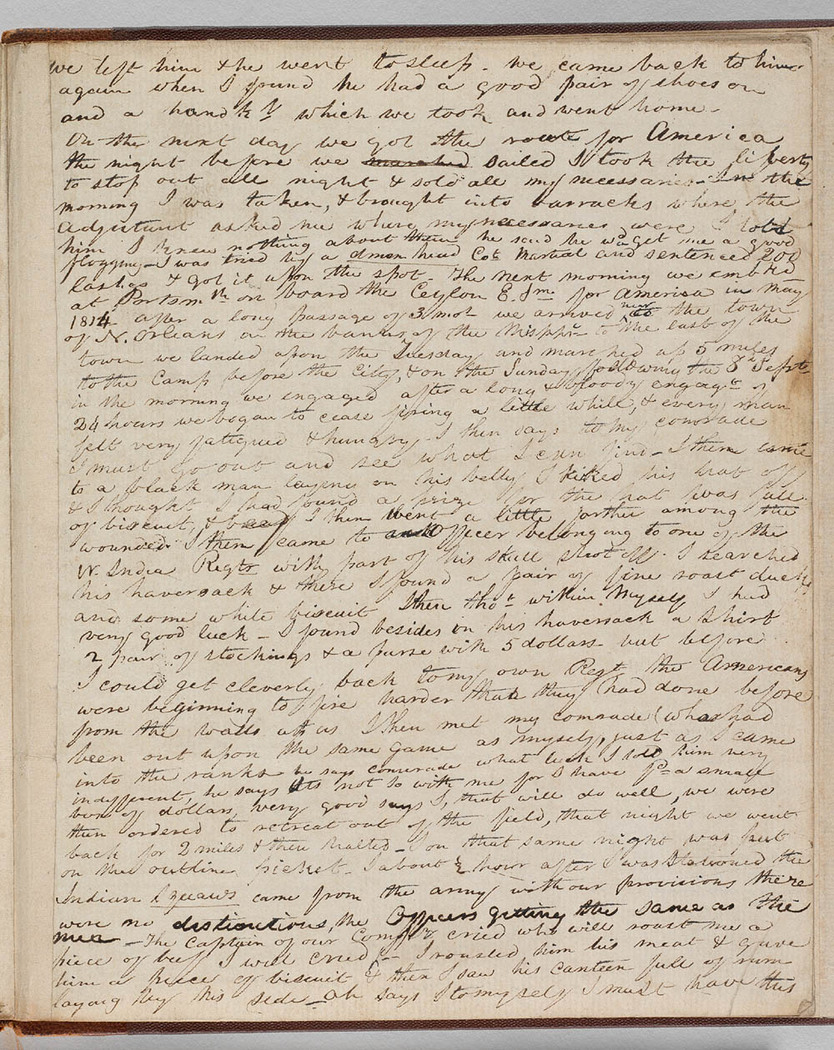 Thomas Scott - 'Life of a Convict named "Isaacs" a Jew in Van Diemen's Land taken down from his own dictation in the year 1821 at Elizabeth River where he then was - Servant to Govr. Sorell as his Stock Keeper' - p51821

We left him & he went to sleep. We came back to him again when I found he
had a good pair of shoes on and a handker which we took and went home. On
the next day we got the route for America the night before we marched sailed
I took the liberty to stop out all night & sold all my necessaries

In the morning I was taken, & brought into barracks where the Adjutant asked
me where my necessaries were I told him I knew nothing about them he said he
wd get me a good flogging - I was tried by a [drum?] head Crt Martial and
sentenced 200 lashes & got it upon the spot. The next morning we embkd at
Portsmth on board the Ceylon E.Im [?] for America in May 1814.

After a long passage of 3 mths we arrived near the town of N. Orleans on the
banks of the Mississippi to the east of the town we landed upon the Tuesday
and marched up to 5 miles to the Camp before the City, & on the Sunday
following the 8th Sept in the morning we engaged after a long & bloody engagmt
of 24 hours we began to cease firing a little while, & every man felt very
fatigued & hungry.

I then says to my comrade I must go out and see what I can find - I then came to a
black man laying on his belly I kicked his hat off & I thought I had found a prize for
that hat was full of biscuit & beef I then went a little farther among the wounded I
then came to an officer belonging to one of the W. India Regt with part of his skull shot off.
I searched his haversack & there I found a pair of fine roast duck and some white
biscuit - then thot within myself I had my good luck - I found besides in his haversack
a shirt & pair of stockings & a purse with 5 dollars. But before I could get cleverly
back to my own Regt the Americans were beginning to fire harder than they had
done before from the walls at us I then met my comrade (who had been out upon
the same game as myself, just as I came into the ranks he says comrade what luck
I told him very indifferent, he says its not so with me for I have fd a small box of dollars,
very good says I, that will do well, we were the ordered to retreat out of the field,
that night we went back for 2 miles & then halted - I on that same night was put
on the outline picket. I about 1/2 hour after I was stationed the Indian Squaws
came from the army without provisions there were no distinctions, the
Officers getting the same as the men - The Captain of our Compy cried who
will roast me a piece of my beef I will cried I - I roasted him his meat & gave
him a piece of biscuit & then I saw his canteen full of rum laying by his side –
Ah says I to myself I must have this