Current highlights include original artwork and sketches for Shaun Tan's award-winning picture book Dog. Also on display are handwritten poems, letters and objects associated with the life and work of writer Henry Lawson, who died 100 years ago on 2 September 1922.

This is the earliest known book on fish with colour illustrations. Its 460 brilliantly hand-coloured engravings show marine creatures collected in the East Indies.
The Dutch publisher Louis Renard never left the Netherlands but relied on drawings and information from travellers and natural historians. He went to great lengths to establish the authenticity of the specimens and included first-hand testimonies in the introduction.

It is estimated that only 100 copies of the book were printed, and the Library’s copy is one of 16 known to have survived. It includes information on how the fish taste and how best to serve them. The douwing princess pictured here is said to have a delicious a taste similar to salmon.

This beautifully patterned triangular fish (Piscis triangularis) appears in De historia piscium by British ichthyologist Francis Willughby. The book was published by the Royal Society, the leading association of British scientists, after Willughby’s early death from pleurisy at 37. It was the first illustrated work on fish published in England.

The flying gunard (Dactylopterus volitans) would have been sent to Gessner from the English Channel or Mediterranean. A bottom- dwelling fish, it can glide above the water for short distances by spreading its pectoral fins.

Leading 16th century naturalist Conrad Gessner compiled the four-volume Historia animalium between 1551 and 1558. The fourth volume describes fish, marine animals, and mythical creatures including mermaids and sea monsters. Gessner would not have observed these creatures himself but relied on descriptions or specimens sent to him from across Europe.

Letter to George Robertson about money issues, 1909 by Henry Lawson

Letter from the Angus & Robertson archives.

In 1895 Sydney publishers Angus & Robertson (A&R) contracted Lawson to compile a book of his poetry and another of his short stories. These became very popular and, with his regular contributions to leading magazines and newspapers, cemented his reputation as a writer. Flushed with literary success, in 1896 he met and married Bertha Bredt, but when he wasn’t writing Henry slipped into depression, drinking heavily to suppress his shyness and insecurities.

Always short of funds, he sold his copyright to A&R while his books were still on the press. Frustrated by his lack of financial success, he took his wife and two young children to London in April 1900, hoping to conquer the literary world.

Despite some publishing success there, the Lawsons grew homesick. They returned two years later, broke, in poor health and with their marriage in tatters. Lawson’s failure in London was a setback from which he never fully recovered. Bertha divorced him in April 1903, citing his alcoholism and desertion of the family.

Loneliness and trade IV, from ‘A Fragment of Autobiography’

An unpublished manuscript in bound volume from the Angus & Robertson archives.

Lawson’s health and state of mind continued to decline through the last decades of his life. Though he continued to write, and published several collections of poetry and prose, he never regained his previous creative spark. His public drunkenness and failure to pay child support led to repeated incarcerations in Darlinghurst Gaol, and he also spent time in Darlinghurst Mental Hospital. Deeply depressed and perpetually poor, Lawson quickly reverted to his old ways on his release from hospital or gaol, petitioning steadfast friends like George Robertson and JF Archibald for financial aid.

In 1920 Lawson was granted a lifetime pension of £1 per week from the Commonwealth Literary Fund. He suffered a brain haemorrhage in 1921, which ultimately led to his death on
2 September 1922, at the age of 55. His death generated widespread mourning on a scale usually reserved for national leaders and he was accorded a state funeral on 4 September, the first non-official to be honoured in this way.

Henry Lawson was a celebrated figure during his lifetime and his work continues to be read widely and taught in schools. However, for readers today, Lawson’s work needs to be interpreted in the light of the mental illness and domestic violence that so greatly affected his life and work.

This watercolour depicts a view of Parramatta that includes the recently completed residence of Pieter Laurentz Campbell, Police Magistrate at Parramatta from 1836 to 1839. Known today as Broughton House (in the mid-right of the painting), it was built from a design attributed to John Verge and prominently situated on a small hill near the Parramatta River.

from Repository of Arts, Literature, Commerce, Manufacturers, Fashions and Politics, 1809–18

The aspirational lifestyle of early 19th century England is recorded in the vibrant images of the Repository of Arts magazine. Publisher Rudolph Ackermann had opened a print-selling business of the same name at the Strand in London in 1798. From 1809 he produced a magazine to keep people who could not visit his premises up to date with the latest trends in clothing, furniture and room design. Securing 3000 subscribers in its first year and circulating internationally — including to the Australian colonies — the magazine came with hand-coloured prints and small samples of fabric and wallpaper that have retained their vivid colours.

Building and mining shaft in the goldfields

Marcus Owen’s technical drawings give a unique insight into goldmining practices on the New South Wales and Victorian diggings in the 1850s, from his perspective as a German immigrant engineer. With style and detail rarely seen in watercolour drawings of the period, the notebook documents the processes involved in extracting gold from the earth, including shaft sinking methods and cradling techniques. Oxen went on to make his fortune on the Hill End goldfields and registered his own goldmining company on the Sydney stock exchange in 1872.

The world dissected upon the best principles to teach youth geography

The modern jigsaw puzzle can trace its origins back to the ‘dissected maps’ first produced in England in the 18th century. They were created by engraving and printing a map on paper, which was then mounted onto a piece of wood and cut into shapes. Although jigsaw puzzles are a popular leisure activity today, early dissected maps were intended as educational tools to teach children geography. This example from 1820 was produced by William Darton, a map seller and publisher of children’s books and puzzles.

A hand-coloured engraved map on mahogany board with accompanying mahogany box , acquired in 2022 through a donation to the State Library of NSW Foundation in honour of the late Barbara Thomas .

Rationing was an essential part of life in the war years as households reused and repurposed what they had. Tintex, an Australian chemical business, responded to worldwide shortages of fabric dye during World War I by expanding its products to create a rainbow of colours. Then, in 1920, it became the first company to successfully formulate a cold-water dye. The advertising emblem of the ‘Tintex Girl’ — seen here in original form — changed over the years to reflect the latest fashion and styling trends. With dye stocked by every pharmacist, general merchant and haberdasher, the world became a little brighter once more.

Henry Louis Bertrand, known as the Mad Dentist of Wynyard Square, was gaoled in 1866 for 28 years. His crime? The murder of Henry Kinder, husband of Bertrand’s patient and then lover Ellen Kinder. Bertrand was a felon and an amateur artist, as seen in this detailed watercolour of Darlinghurst Gaol which he painted while incarcerated. You can see one of Robert Howard’s many garden beds in the lower left-hand corner. When Bertrand was released in 1894, he went to England, changed his name, and took up dentistry again.

Photo by Shaun Tan, courtesy of the artist. Originally published in Tales from the Inner City, Allen & Unwin, 2018. 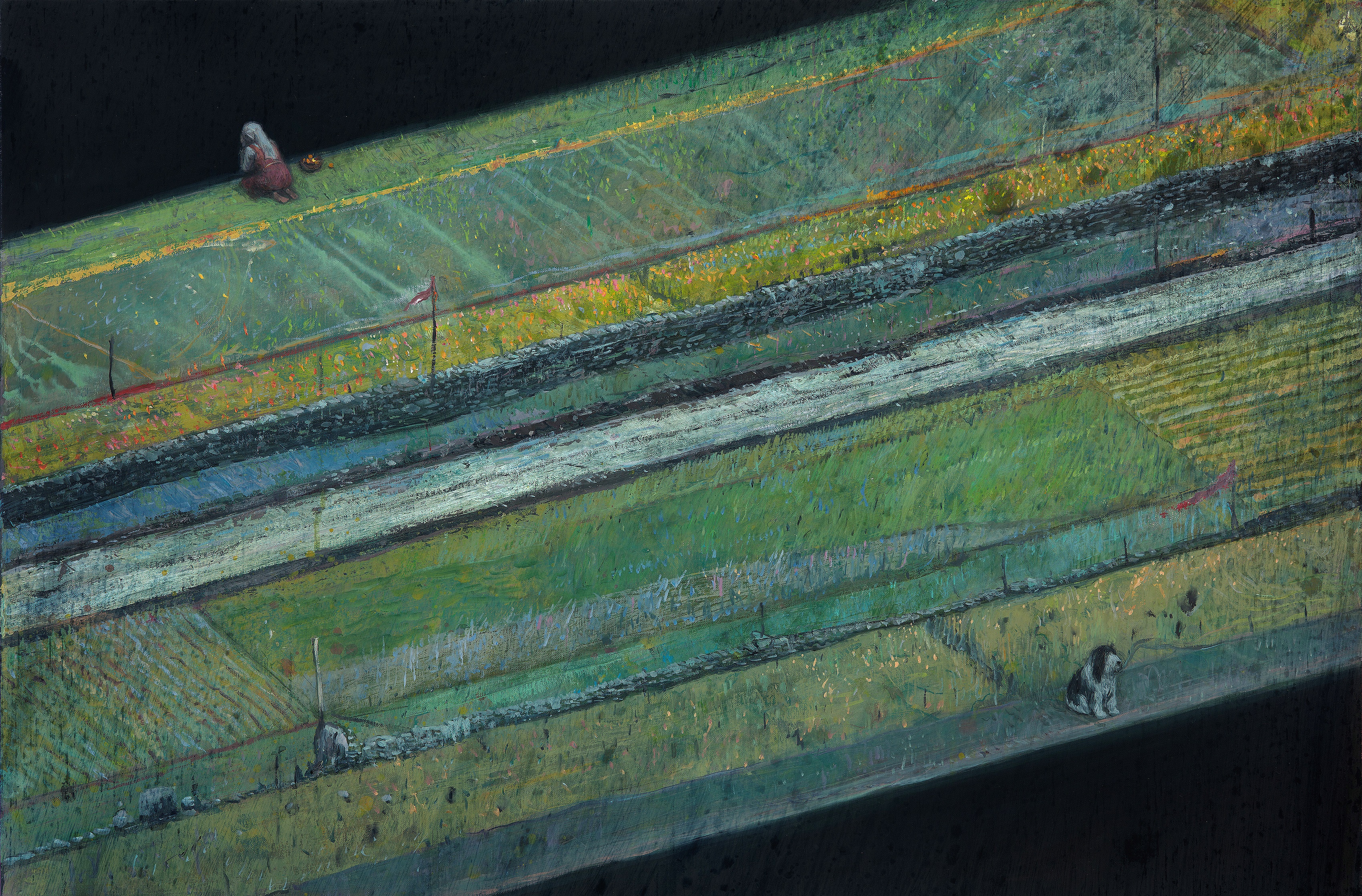 Acrylic and oil on canvas.... 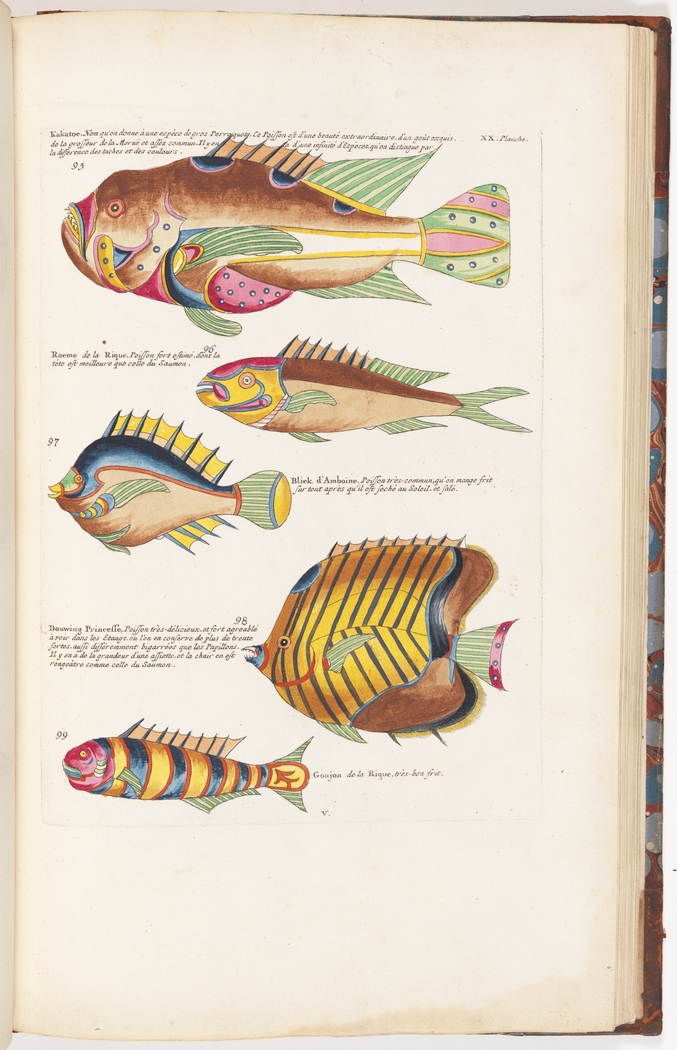 This is the earliest known book on fish with colour illustrations.... 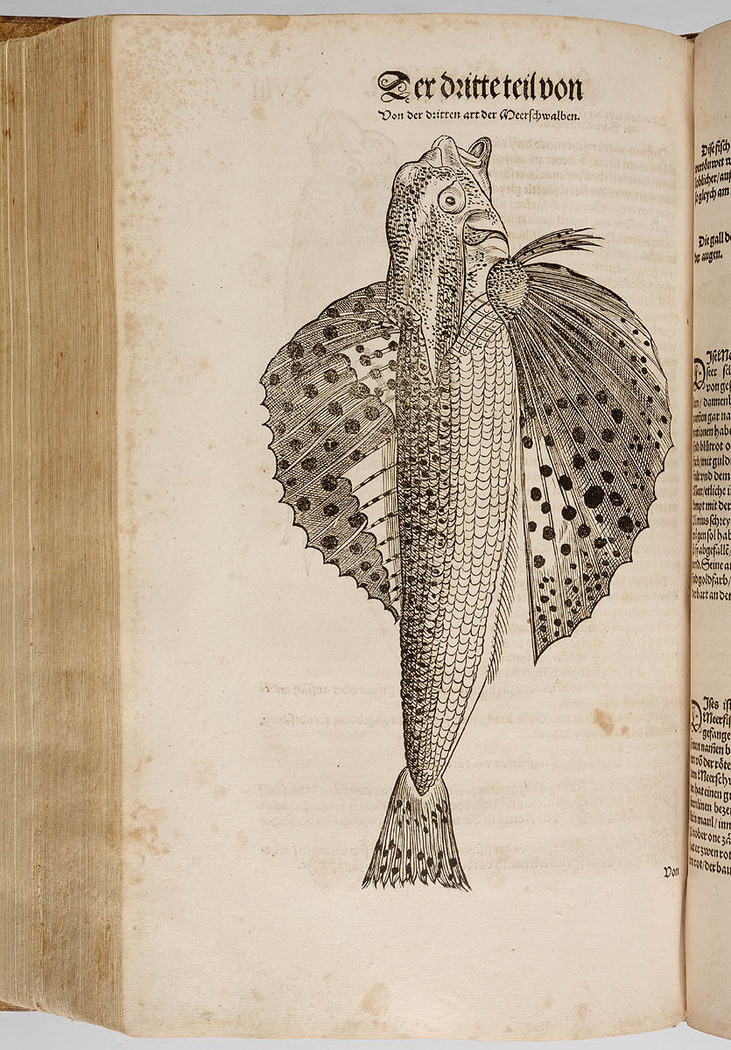 The flying gunard (Dactylopterus volitans) would have been sent to Gessner from the English... 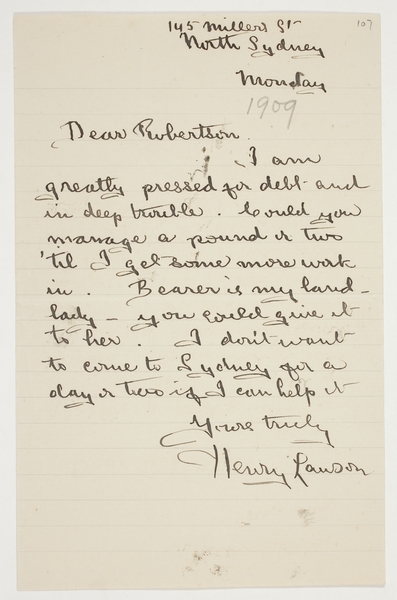 Letter to George Robertson about money issues, 1909 by Henry Lawson

Letter from the Angus & Robertson archives.... Loneliness and trade IV, from ‘A Fragment of Autobiography’

An unpublished manuscript in bound volume from the Angus & Robertson archives. Lawson moved to Sydney with his mother after his parents’ marriage ended in 1883. It was at his... Lawson’s health and state of mind continued to decline through the last decades of his life.... 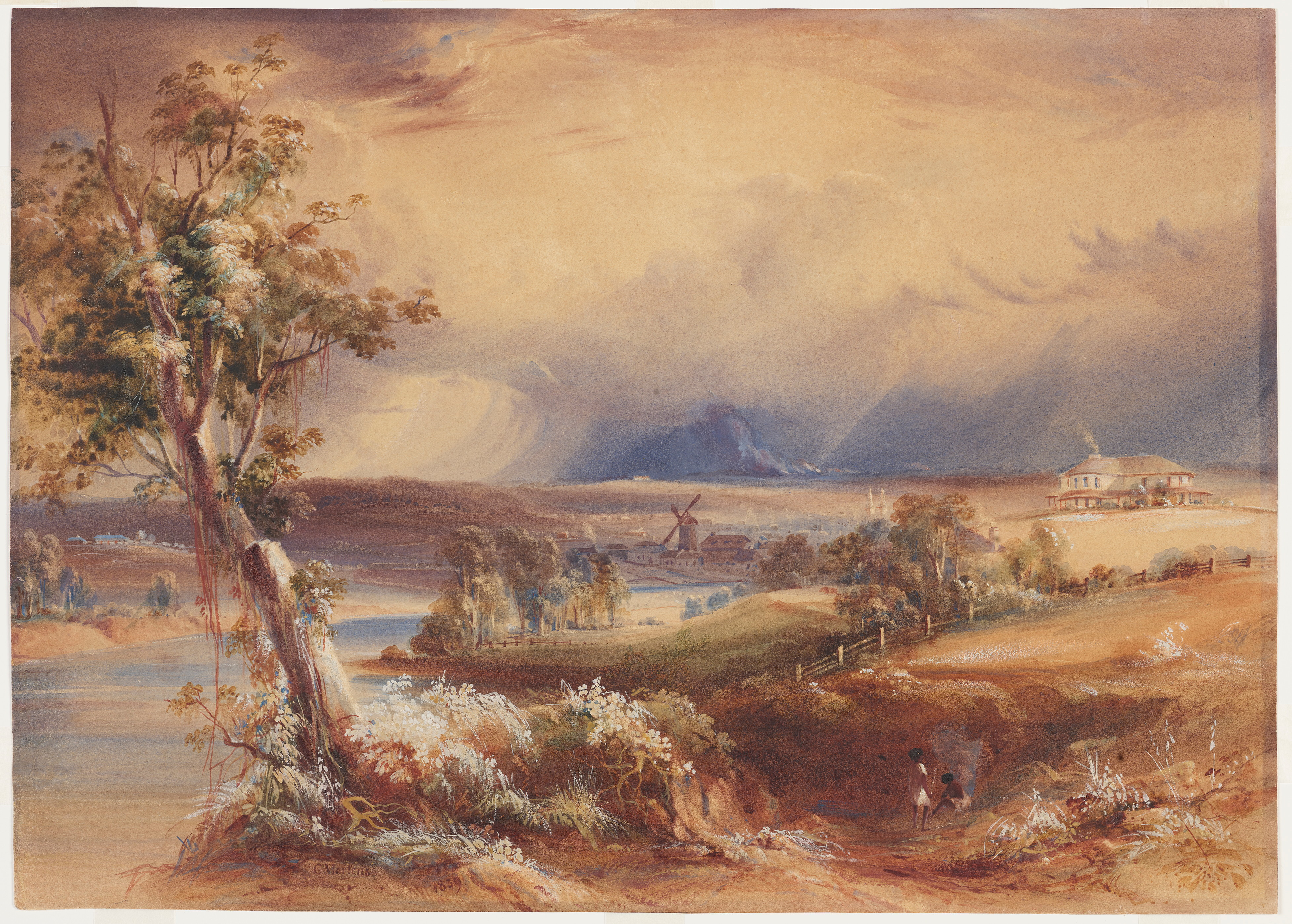 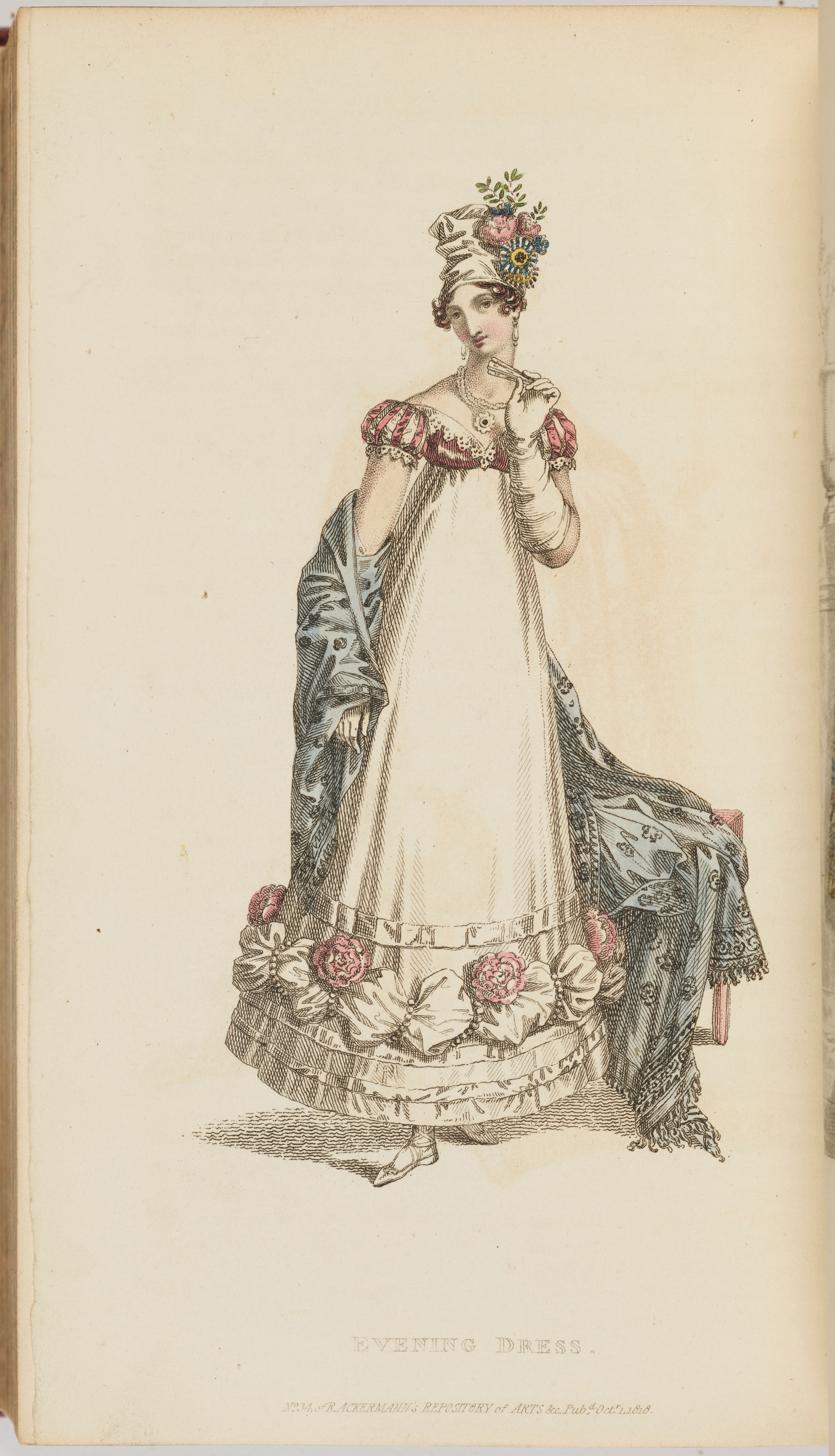 from Repository of Arts, Literature, Commerce, Manufacturers, Fashions and Politics, 1809–18 ... 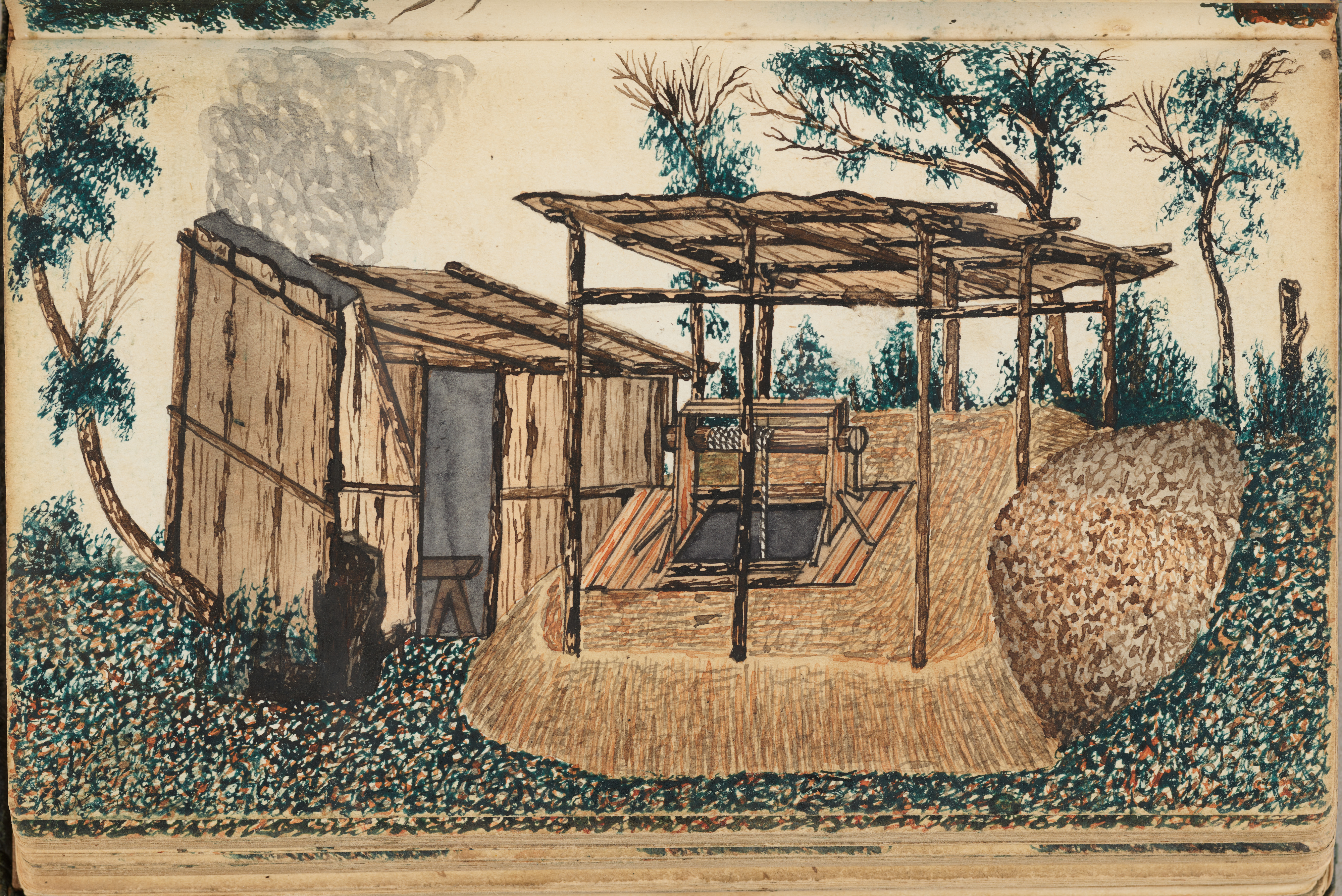 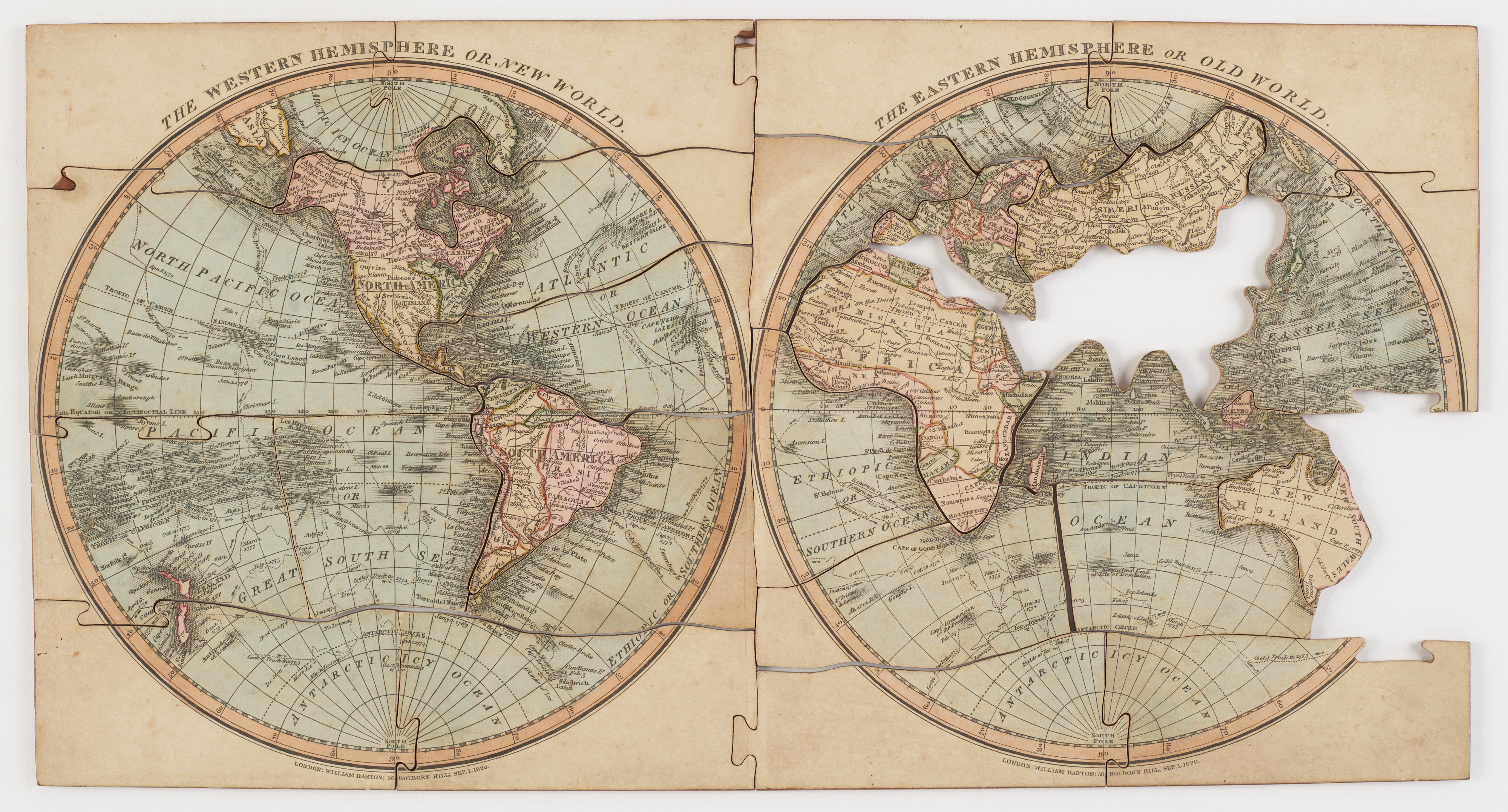 The modern jigsaw puzzle can trace its origins back to the ‘dissected maps’ first produced in... 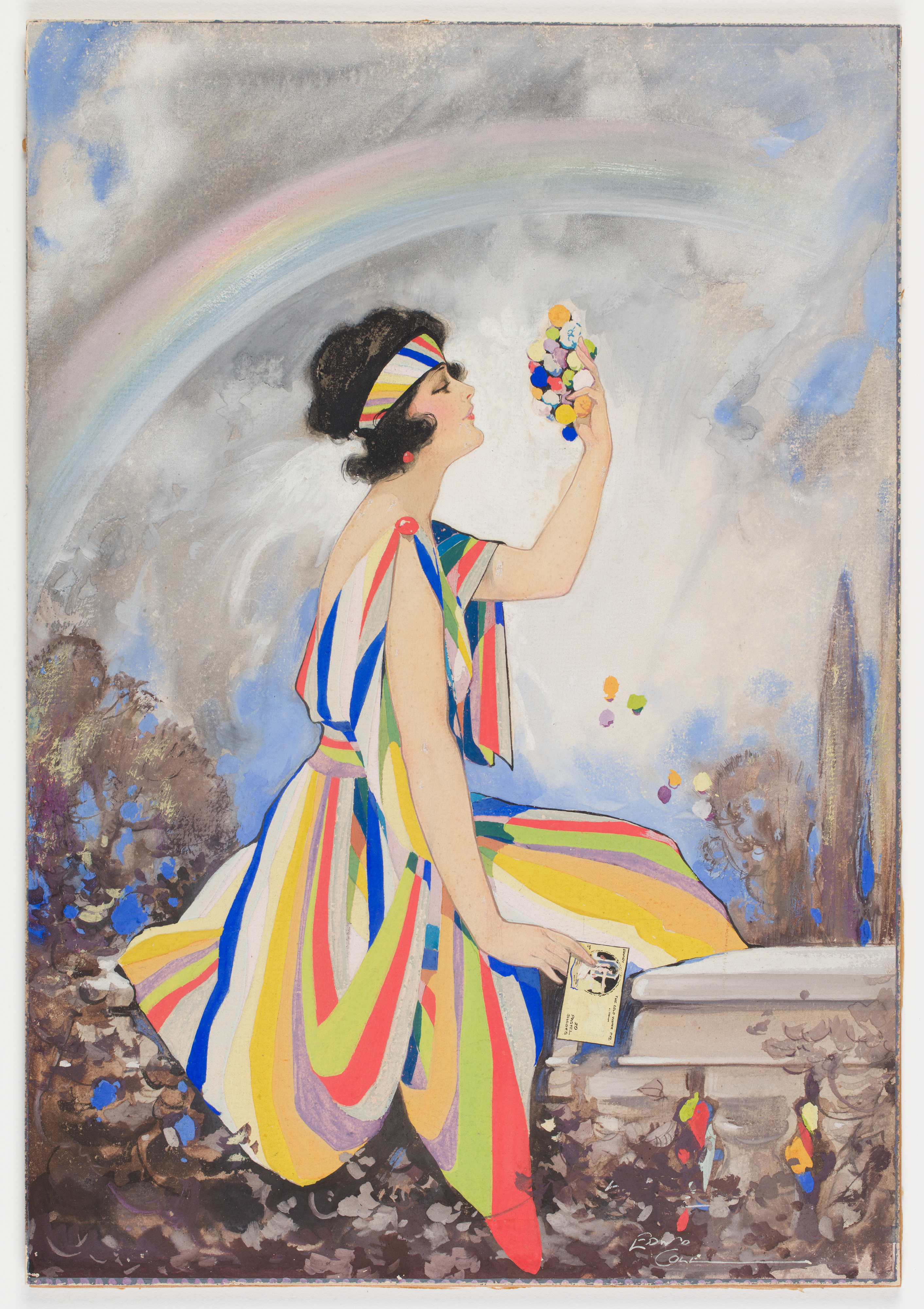 Rationing was an essential part of life in the war years as households reused and repurposed what... 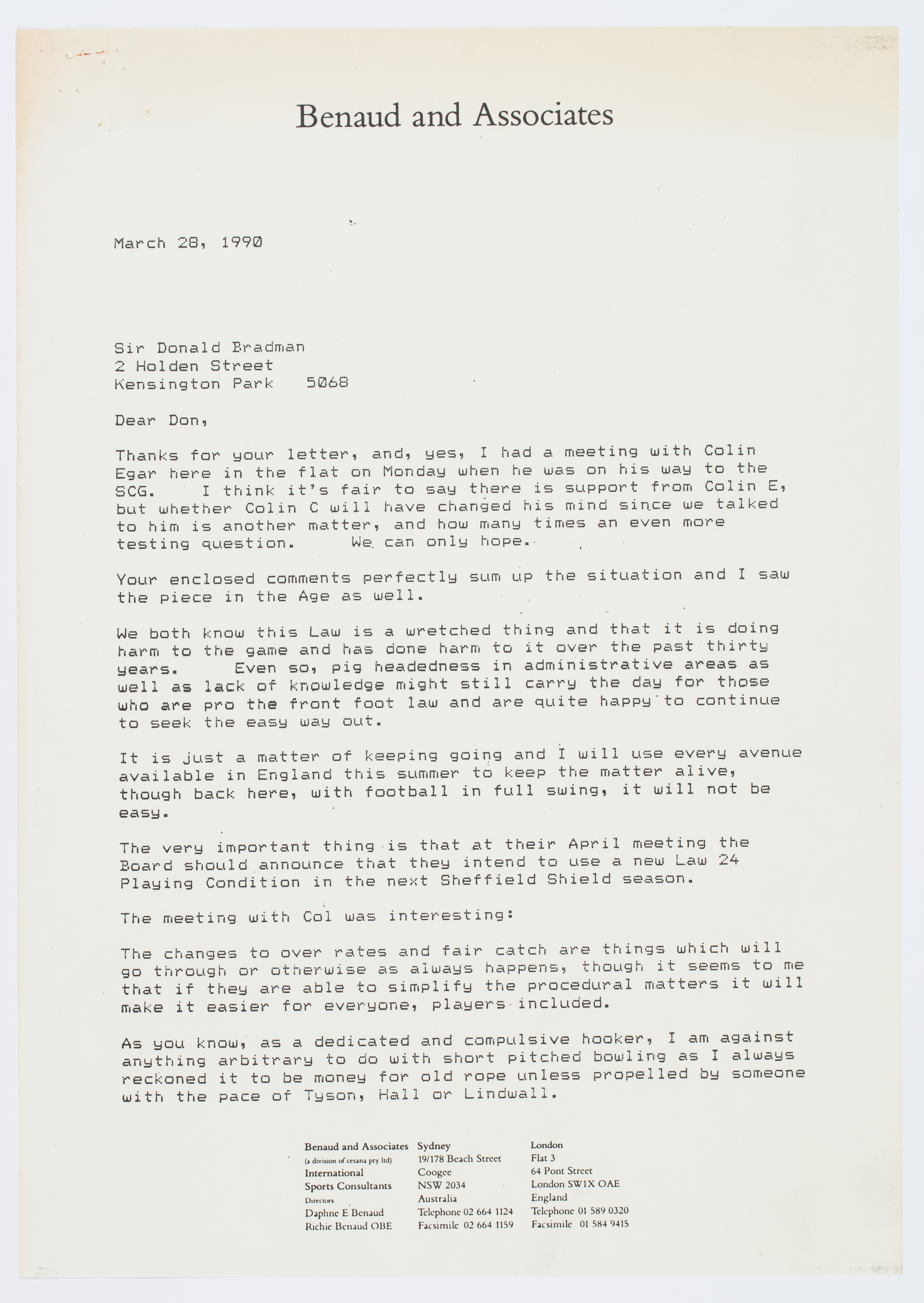 Two hundred and fifty years after the Laws of Cricket were written in 1744, former Australian... 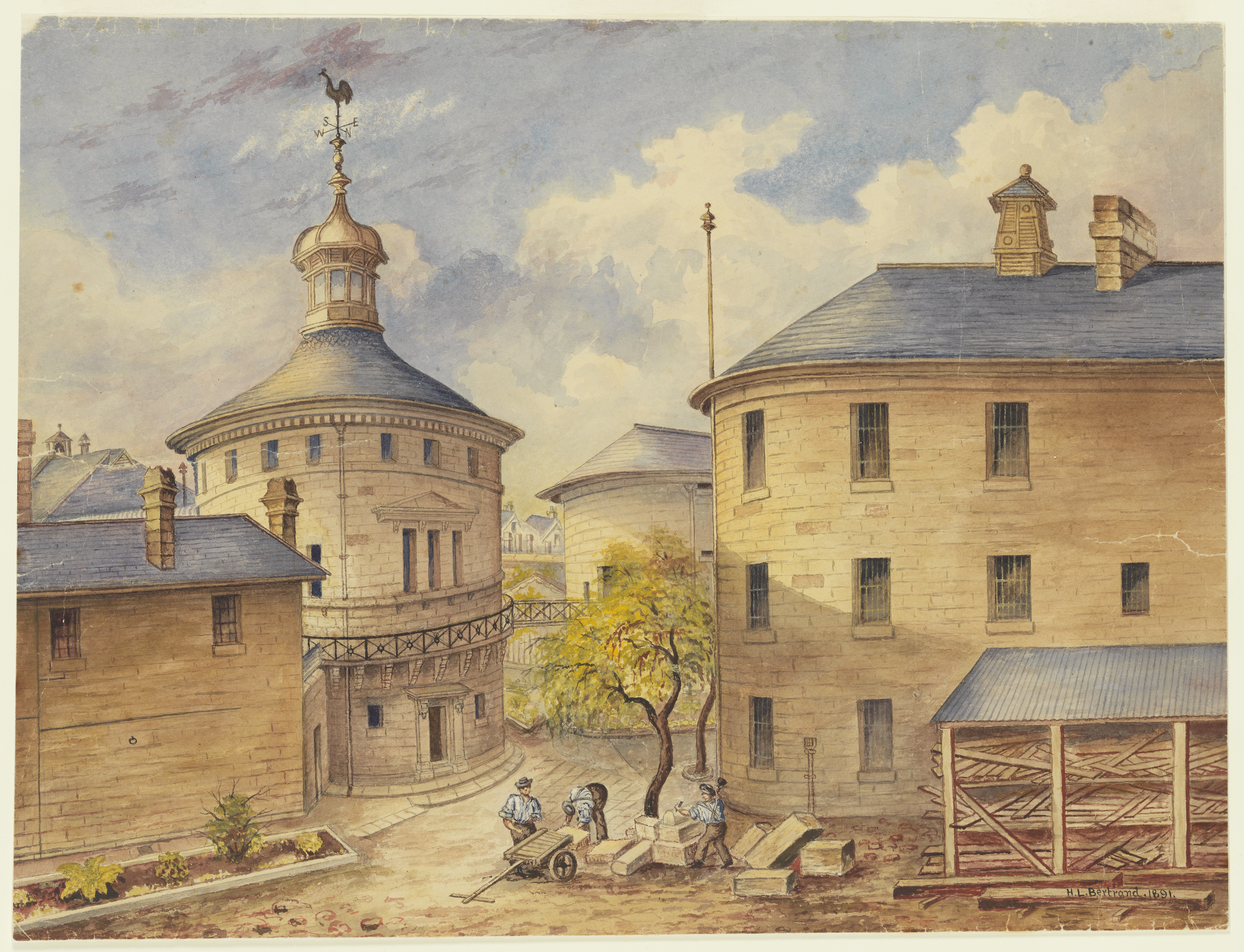 Henry Louis Bertrand, known as the Mad Dentist of Wynyard Square, was gaoled in 1866 for 28 years...

Visit the Amaze gallery at the Library