More on voting and elections

More about Government and Rights

All elections involve boundaries that define which voters get to elect which candidates to represent them in legislative bodies. These boundaries define what in Australia are called electoral divisions or electorates.

The laws concerning drawing electoral boundaries are important and controversial because those boundaries can affect who wins elections.

Who draws the lines?

In Australia, committees of public officials draw and redraw electoral boundaries. These committees are established by law to be independent of the government of the day, the parliament, political parties and other groups who might have an interest in drawing up electorates to suit their political purposes.

At various points, the process of drawing electoral boundaries involves publicity and public consultation. For House of Representatives electorates, the redistribution committees invite suggestions from the public before they begin to redraw boundaries and consider objections after they have released a draft set of proposed boundaries. Political parties make submissions to the committees to try to persuade them to draw boundaries in ways that will favour their candidates. The final decision on electoral boundaries, however, stays with the committee.

Having an independent body to draw electoral boundaries may seem an obvious way to avoid or reduce the manipulation of boundaries by governments and political parties. It is not a universal practice, however, even among western democracies. In the United States, for example, the state legislatures (the equivalents of Australian state parliaments) commonly draw the electoral boundaries for state and national elections. This means that American redistribution processes are much more involved with party politics than they are in Australia. The Democratic and Republican parties have both used their majorities in state legislatures to draw up boundaries that favour their own candidates over opponents.

The sort of manipulation of electorate boundaries that goes on in American state legislatures is known as ‘gerrymandering’. The aim is usually to draw boundaries that maximise the number of parliamentary seats won by a party on its available vote. Deliberate gerrymanders for this purpose have been much rarer in Australian politics than in the United States.

The word ‘gerrymander’ originated in 1811 in Massachusetts, USA, when Governor Elbridge Gerry drew a wiggling electoral boundary designed to favour his party. Discussing the strange shape of the electorate, someone suggested it looked like a salamander. A newspaper editor replied ‘I call it a Gerrymander!’ and introduced the expression in his newspaper. Gerry’s electoral manipulation duly worked to his party’s advantage and ‘gerrymander’ gradually gained wider usage.

We could draw the boundaries differently so that with the same number of votes, Party A now wins three electorates to Party B’s one. 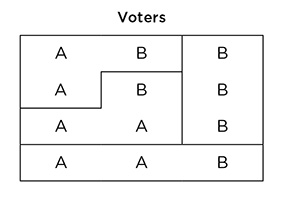 Equally, we could redraw the boundaries to give Party B three wins to Party A’s one. 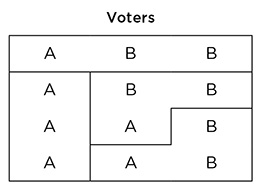 While gerrymanders are generally used to benefit parties, they have also been used in the United States to improve the chances of members of minority ethnic groups such as African or Latino Americans being elected. Before the courts began to restrict them, these efforts led to the drawing of strange looking electoral boundaries that joined up geographically separate ethnic communities.

Australian electoral boundaries have not been designed with this purpose in mind. Under the Commonwealth Electoral Act, redistribution committees must ‘give due consideration’ to an electorate’s ‘community of interests … including economic, social and regional interests’. This ‘community interest’ consideration has not been applied to improving minority ethnic representation. The other considerations stipulated by the Act are the proposed electorate’s ‘means of communication and travel’, ‘physical features and area’ and existing electorate boundaries. These considerations tend to produce compact electorates in Australia, which follow natural or artificial boundaries such as rivers and major roads.

Similar outcomes have occurred at state and territory level and are difficult to avoid. After 1989, South Australia became the only jurisdiction where the constitution required that electoral boundaries had to be drawn up to ensure that a groups of candidates who won 50 per cent or more of the lower house vote at a general election would win a majority of seats and therefore be able to form government. After a series of close election results that produced minority governments, the provision became controversial. It was removed prior to the 2018 South Australian election.

Malapportionment and ‘one vote one value’

In both of the hypothetical examples of gerrymanders in the previous section, the electorates contained equal numbers of voters. All that was done to change the election result was to change the boundaries of equally sized electorates. A set of electoral boundaries that are drawn so that electorates contain unequal numbers of voters should not be described as a gerrymander, but as a malapportionment. When people complain about gerrymanders in Australia, they are usually really complaining about malapportionment.

The consequences of malapportionment can be just as significant as those of gerrymandering. The following example illustrates this point. It uses the same pattern of voting as in the examples given in the previous section, but this time across two electorates containing three voters and one electorate containing six voters. 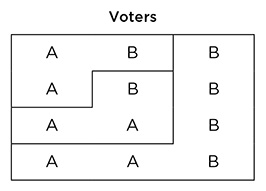 The winning candidate in the larger electorate has to win twice as many votes as the winning candidates in the two smaller electorates. Another common way of expressing this is that each vote in the smaller electorates has been ‘weighted’ to count for as much as two votes in the larger electorate. By assigning different weights to votes, malapportionment violates the principle of voter equality generally expressed as ‘one vote one value’. The consequence in the case above is that Party A, with the same number of votes as Party B, wins two electorates to Party B’s one.

Deliberate malapportionment has been common in Australian electoral legislation. It has been used to favour small states and country areas and the parties that tend to draw their electoral support from these regions.

The Australian Constitution does not protect against malapportionment. In 1974 and again in 1988, voters rejected referendum proposals that would have written a requirement for equal electorates into the text of the Constitution.

In its decisions in the McKinlay and McGinty cases, the High Court held that the Australian Constitution does not require electorates to be drawn up on the basis of ‘one vote one value’. In 1975, Brian McKinlay argued unsuccessfully that section 24 of the Constitution, stating that Members of the House of Representatives shall be ‘directly chosen by the people’, was violated by large inequalities in enrolment figures across different Victorian House of Representatives electorates. In 1996, Jim McGinty tried to have Western Australia’s state electoral system declared unconstitutional on similar grounds. McGinty hoped that the court would view ‘one vote one value’ as a right implied by the Australian and Western Australian constitutions, following its decisions in ‘implied rights’ cases earlier in the 1990s. The court rejected this argument.

Rather than preventing malapportionment, in several cases the Constitution produces it. Section 7 leads to malapportionment in Senate elections by requiring that each state have the same number of senators. This means that in 2019, approximately 384,000 Tasmanian voters elect the same number of senators as approximately 5,272,000 voters in New South Wales.

Similarly, section 24 of the Constitution guarantees all the original states at least five Members of the House of Representatives, regardless of whether their population size would otherwise justify this number. For this reason, the average number of eligible voters in Tasmanian House of Representative electorates in 2016 was around 74,700 voters, compared with an average of about 105,500 across the rest of the country.

As well as this constitutionally protected malapportionment in favour of small states, for many decades from Federation, Commonwealth law allowed significant disparities in the numbers of voters in different electorates. The number of voters could vary up to 20 per cent either way from the average enrolment. This meant that some electorates could have two-thirds as many voters as other electorates. The Parliament also had to agree to redistributions being carried out and gaps of over ten years between redistributions were common. Population shifts during these periods, particularly from rural areas to the cities, reinforced the trend for some electorates to contain significantly more voters than others.

The main beneficiary of this inequality was the then Country Party (now National Party), since it drew its support almost exclusively from the less populous rural electorates. In the 1970s and 1980s, Labor federal governments initiated changes to the Commonwealth Electoral Act to ensure that House of Representatives electorates became more equal. As a result, the permissible variation in voter numbers for any electorate has been reduced from 20 per cent to 10 per cent more or less than the average enrolment. Redistribution committees are now also required to examine demographic trends and draw boundaries so that variations between electorates will tend to reduce over time.

Rather than Parliament determining when redistributions will take place, the Commonwealth Electoral Act 1918 now requires that redistributions be held for House of Representatives electorates in a state or territory at least every seven years. They must be performed more frequently if population changes within or between states and territories are large enough. More frequent redistributions and the reduction in allowed variations between electorates have reduced malapportionment at the Commonwealth level.

Historically, malapportionment in lower house electoral systems has been much stronger at state than at Commonwealth level. Governments in all states except Tasmania have, at some time or other, passed legislation that divided state electorates into electoral zones. Queensland had various zonal systems from 1949 to 1991, New South Wales from 1928 to 1979, Victoria from 1903 to 1952 and again from 1965 to 1983, South Australia from 1936 to 1976 and Western Australia from 1922 to 2008.

These zonal systems separated country electorates from urban electorates. A number of systems also created different zones for different types of urban and country areas. In all cases, seats in the country zones have averaged fewer voters than those from urban zones. In Western Australia, the last state to end its zonal system, the electorates in the ‘Country Area’ averaged about half the number of voters in ‘Metropolitan Area’ electorates.

Governments that have used electoral zones have justified them in two ways. First, they have argued that parliamentarians cannot adequately service large country electorates. Second, they have argued that the economic importance of industries like farming and mining should be reflected in more seats for country areas. Not surprisingly, zonal systems were always introduced by parties that had significant support in country areas. Non-Labor parties introduced them in all states except Queensland. Moves to abolish zonal systems (rather than adjust or weaken them) have all been initiated by Labor governments, using the ‘one vote one value’ argument.

Previous chapter
Standing for election
Table of contents
Hot Topics: Voting and elections
Next chapter
How votes are counted